Why must 'that' be omitted whenever constituents are questioned? 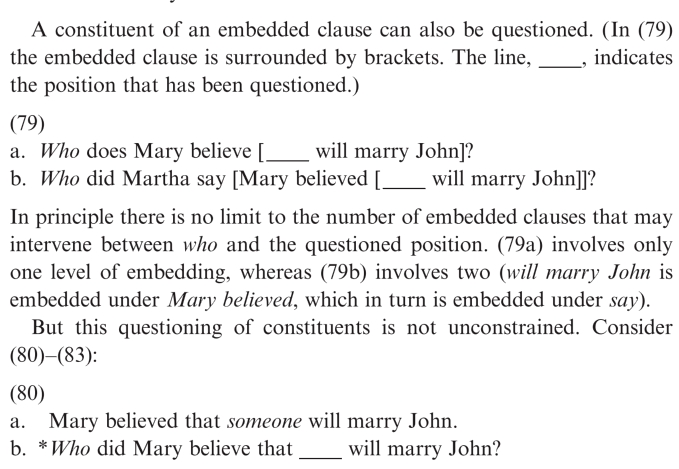 You're asking why one particular syntactic rule has one particular exception. There are thousands of such rules, and many more exceptions; nobody knows the reasons for any of them. What kind of answer are you looking for? Oh, and I suppose I have to ask whether you're familiar with Ross Constraints, because this is one of them.

I assume you're familiar with cyclic-movement of wh-constituents, and I want to generate the subjects as specifiers of IPs on purpose, their generation in Spec,VP won't affect my discussion. The sentence in (1) is grammatical. The object which boxer is extracted (moved) from an embedded position into an intermediate Spec,CP position leaving a trace behind. However, (2) is ungrammatical for an obvious reason related to the fact that there are two movements involved (why and which boxer). So, either why or which boxer has to move first into the embedded position Spec,CP. Let us say that which boxer moves first to the embedded Spec,CP and leaves a trace behind. When the turn comes for why to move, it finds that an already wh-constituent is filling the embedded Spec,CP position, as a result it will have to move straight away to the matrix Spec,CP as (2) shows. Ross has noticed that this movement is constrained, hence the term Ross Constraints. This movement violates an island-constraint on movement (wh-movement in our context). Therefore, wh-constituents are islands or barriers to movement. A wh-constituent does not allow another wh-constituent to cross over it. Remember that we have to generalize that this position (i.e., Spec,CP) though empty, must host the first movement of wh-constituent (Spec,CP acts as a rest station for this movement). The wh-island above is similar to the complex NP in the following sentence:

In (3), the modified NP is marked in bold. Here, there's only one instance of wh-movement, but still the sentence is ungrammatical. The similarity between (2) and (3) lies again in the notion island. Ross identifies this type of NPs as islands along with wh-constituents. Again wh-movement cannot cross NPs of this sort (he calls them COMPLEX NPs, hence the notion Complex NP Constraint). Keep in mind that each language varies according to how many islands an extracted wh-element can cross.

With this logic, let us consider the following sentences:

In (4’), the object whom is extracted from the foot of the tree leaving a trace behind. I assume you're familiar with the notion government. V governs the object and assigns it both an internal theta-role and an accusative case. The movement from this position into the matrix Spec,CP is not allowed (Ross, constraint). Remember that movements must rest in Spec,CP first (cyclic movement). So, it should land in the embedded Spec,CP first, then move right away to the matrix Spec,CP. This is exactly what it does in (4’) shown with the intermediate trace in the embedded Spec,CP. Let’s turn to (5’) now. This sentence is a problem. Notice that it is similar to your example in (80b) above.

In (5’), it is a subject which is extracted from Spec,IP leaving a trace there. There is a Spec,CP position available in this case, it has to move to move there first then later to the matrix Spec,CP (hence no violation of Ross constraint). Still, the sentence in (5’) is ungrammatical. I will deliberately escape another notion called ‘subjacency’ (Chomsky, 1973) which reformulated Ross constraints, and move straight away to what (5’) violates. Before we do so, notice that in terms of representation there is no difference between (4’) and (5’), they both have Spec,CP as a landing site.

A governs B iff there is no Z such that:
Z is a potential governor for B; Z c-commands B; Z does not c-command A.

In (4’), the trace of whom in the foot is properly governed, because it’s theta marked and governed by a V marry. However, the trace of who in the Spec,IP is a problem. It is indeed governed by I (which assigns it the nominative case), but it is not governed by V (although we assume that who moved from Spec,VP; still, it is governed by a V’ not a V; X’ projections are not governors). Now, what remains is antecedent-government. The subject who moves from Spec,IP to Spec,CP as Ross Constraint (and Chomsky’s Subjacency) dictate. But look carefully that the trace in Spec,IP cannot be antecedent governed by who in the intermediate Spec,CP (before moving to the matrix Spec,CP). It cannot be antecedent governed because the complementizer that intervenes. that is a head and hence a potential governor. So what this that does is it intervenes between a proper antecedent-government between Spec,CP and Spec,IP. It’s in the middle.

So, that is omitted because it acts as a barrier between the intermediate trace in Spec,CP and the trace in Spec,IP, which again triggers ECP. When it's omitted, no such barrier intervenes and no ECP is triggered= Grammaticality.

I think there is a straightforward explanation for the observed acceptability contrast. The word that functions in various ways: it can be a pronoun (e.g. I heard that, too), a determiner (e.g. We've seen that movie), or a subordinator (e.g. They said that they are interested). If we assume that that is necessarily interpreted as a pronoun when it (immediately) precedes a finite verb (whereby the modal verb will is considered finite), then the ungrammaticality of (80b) is predictable. The word that is interpreted as the subject argument of will marry, and John is of course the object argument of will marry. Hence the transitive predicate will marry is satiated, both of its arguments being immediately present in its clause. This situation renders the sentence-initial Who an orphan, for it cannot find a home.

The statements in the previous paragraph are based on a further assumption, namely that sentence structure is produced and processed online, that is, in time from earlier to later. The desire is hence to identify the subject argument as soon as possible in order to process the rest the sentence more smoothly. Thus, the first candidate for subject status is necessarily construed as the subject. This situation forces the interpretation of that in (80b) as the subject pronoun.

There is another phenomenon that is closely related to the main observation in the question and that indirectly supports the sort of explanation being put forward here. This further phenomenon occurs in reduced relative clauses, e.g.

Reduced relative clauses are possible in the event that the relativized position is an object. If the relativized position is a subject, the relative pronoun or subordinator that cannot be omitted. Given the reasoning developed above, example (1d) fails because the boy is necessarily interpreted as the subject argument of the predicate told, which renders the whole thing a matrix clause (contrary to what the gap indicates).

4
Is there a term for “the number of words that must follow a given word to complete a phrase”?
5
Are there languages that have grammatical morphemes that specify the scope of modifiers?
18
Are there any languages that don't permit instrumental subjects?
4
Why must adversative coordination be binary?
3
Are sentences the only constituents that “sentence adverbs” modify?
7
Why does the English complementizer “that” look like the relative pronoun “that”?
3
If the that-trace effect is not learnable and thus must be biologically built in, how can speakers of French or Irish violate it?
0
How to provide evidence that my hypothesis is correct (the same structure but the constituents are different), syntactic structures, constituency
4
Are individual words really constituents?
6
What other languages, apart from Latin, mix elements from different syntactic constituents? And why mixing?