Relation between entailment and semantic features 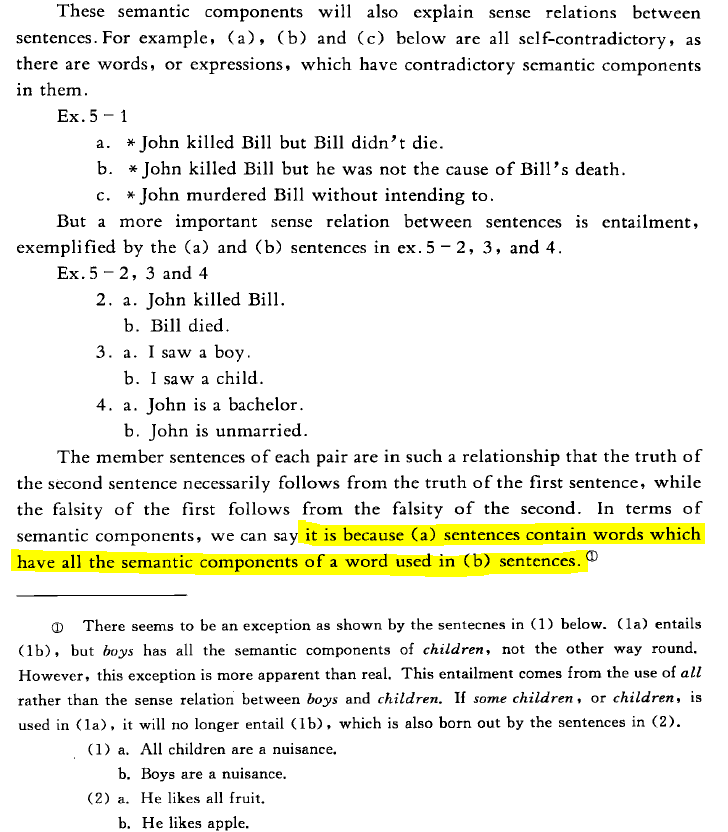 Here, "canaries" has all the semantic features of "birds." Thus, according to the theory, the truth of "I like canaries" is supposed to entail the truth "I like birds" But this conclusion is obviously incorrect.

Do I misunderstand the theory?

The sentence I like canaries can in fact be construed as entailing I like birds. To see that this so, try replacing like with other verbs, e.g.

In these cases, it seems straightforward that each a-sentence entails each b-sentence. The difficulty with the verb like in this environment has to do with an implication. The sentence I like birds implies that I like all birds. Unlike entailment, such an implication can be undone. We see this in the sentence

To avoid the unintended implication in real discourse, a speaker might insert the quantifier some:

The implication now is that there are some birds that I do not like.

In sum, the question addresses the gray zone where entailment and implication meet. The reason it might not seem that entailment is involved is that there is an implication that obscures the presence of the entailment.

You made a mistake in your example. Certainly, you have not checked and approved every single canary. So it would be illogic to draw exactly that inferince from the entailment, that you had approved and seal-stamped every single bird in the world.

That's why the inversion formally requires a quantifier, as the pictured footnote shows.

a) You have seen all birds.

b) You have seen all canaries.

You might argue, if you have seen one, you have seen them all. But arguably you haven't seen the mean canary that will peck at you.

The theory is just not very representative of real life. It seems to imply a strict-subset model of deontic entailment. Human > Children > Boy. But this leads to the circle-ellipse_problem. This is not inescapable. A frequent moniker is that semantics underspecifies.

corolar: @TimOsborns suggestion is not necessarily needed. It is however quite useful for precisions sake; "some" can't be said to be a precise specifier, but it supplements the otherwise lacking paradigm of indefinite determiners. If the line of reasoning is continued, we might find that some definitely suggests that, vice-versa, there is an indefinite amount of birds we don't like. This is uncomfortable, because "some" would potentially entail "zero"; we really don't know that. But this nagging feeling of ignorance, that we really do not like--that's part of the semantics of the verb. This is a fix-point theorem. We don't make this explicit. In case of to see there's no modal aspect, so that "I saw that I saw" is rather trivially equivalent to "I have seen". Reduplication is in fact a typical formation for past tense in some languages.

Conclusion: The entailment "I like birds" is not necessarily incorrect. It's imperfect.

3
Useful Features of Semantic Graphs
2
How I can identify semantic features?
3
At what point in the syntactic hierarchy inside a clause do phrases acquire ‘propositional’ status?
1
Entailment relationship?
5
the difference between upward and downward entailment
2
Difference between semantic selection and WSD?
0
Semantic/linguistic relation in "All jacuzzis are hot tubs"
1
Does a sentence with an adjunct entail the same sentence without the adjunct?