As the title says, in ‘prefer for John to stay’, is ‘for’ a complementizer and the following is a CP, or a preposition?

there is some confusion in the other answers to this question. let me be clear: on any understanding of the term "complementizer," the word for is indeed a complementizer in the context you give. for heads a non-finite CP. allow me to give a sense of the sheer enormity of evidence pointing in this direction.

the main thrust of the evidence is in establishing a clear parallelism between for-clauses and other sorts of clauses headed by complementizers, especially that-clauses. the parallelism serves to show that for-clauses can be described as standard CPs, as shown below. note that infinitival to is a non-finite auxiliary verb, another fact for which there is a preponderance of evidence (see Bob Levine’s paper “auxiliaries – to’s company”). 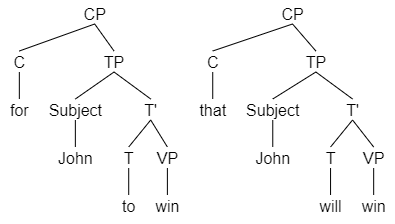 1. for fails to co-occur with other complementizers like that and whether.

bresnan notes that two members of the set of complementizers cannot appear in the same clause together. this suggests they serve the same role in the clause (i.e. they are all complementizers). the example below illustrates with that and for.

(1)
a. *Marie asked that for us to leave her alone.
b. *For that he refuses would not be surprising.
(bresnan p30)

The following examples are from Bresnan p37, where she notes that for-clauses can have the same sorts of syntactic roles that that-clauses can. similar observations can be found in huddleston & pullum 2002 p1182.

(3) Object Complementation
a. I know [OBJECT that he is wise].
b. I prefer [OBJECT for you to speak English].

(4) Subject Complementation
a. [SUBJECTThat he was alone was obvious from the report.
b. [SUBJECT For you to leave right now] would be inconvenient.

(5) Nominal Complementation
a. The idea [COMP-N that nobody will survive] is apalling.
b. The command [COMP-N for all troops to move out] was given Friday.

bresnan observes that, just like finite that-clauses, for-clauses can be extraposed to sentence-final position. when this happens, an expletive it occupies the clauses' original position in the main sentence. the example below is bresnan's, with extraposition taking place from subject position. thus, expletive it occupies subject position in the main sentence.

(9)
a. [ *(That) he was alone] was obvious from the report.
b. [ *(For) you to leave right now] would be inconvenient.
(bresnan p.40. note the notation is intended to show that that and for are obligatory here)

6. for-clauses can have expletive subjects

huddleston & pullum’s basic argument is that the for-phrase is a clause, just like any other, save that it is non-finite. they emphasize that the subject of the for-clause acts just as we would expect the subject of any clause to. the subject can be an expletive there, for instance, something that is typically reserved for subject position.

now it might be worth noting that expletive there can raise to object, even being able to raise to object of preposition, for instance in the following examples.

(11)
a. You can always count on there to be rain.
b. I can almost always rely on there to be a group of students playing Ultimate Frisbee every day at 3:30 in the afternoon
(b example from culicover & jackendoff 2005 p210)

this points towards an analysis of the on cases as involving a true PP, such that the preposition plus infinitival subject form a constituent. this is not a possible analysis with for clauses.

7. for-clauses can have idiom subjects

compare with the placement of both in a that-clause:

because many people are not familiar with the complementizer-trace phenomenon, i will explain a bit more here. one of the most-discussed phenomena in syntactic theory is the “comp-trace” effect, wherein the subject of an embedded clause cannot be extracted when that clause is headed by an overt complementizer. so for instance the canonical illustration would be:

this is sometimes called the “that-trace” effect, but “comp-trace” is more accurate, as it applies with all complementizers, for example with if and whether, as well. since if and whether aren’t in free variation with null realizations, extraction of the subject of an if or whether clause is blocked.

For-clauses participate exactly as we would expect if they were structurally parallel to other clauses headed by complementizers. When for is overt, extraction of the subject is blocked. When for is null, extraction is allowed.

For is optional when the object is extracted, just as with the other complementizers.

thus for acts just as a complementizer would be expected to with respect to the comp-trace effect.

on two differences between for clauses and other CPs

there are sure to be more reasons than the ones cited above. these are just the ones that came to my mind without too much digging.

as with any phenomenon in syntax, really careful investigation reveals many interesting puzzles. if we look really closely, and examine a wide range of complex syntactic properties, we'll certainly find some further ways in which for-clauses differ from that-clauses. but our first response should not be to say that for is not a complementizer, or that it is some sort of exceptional construction. we should construct theories that capture whatever differences we find, while also capturing the deep parallelisms that exist between for-clauses and other clause types.

appendix: some basic background on selection

a commenter insists that the fact that for-clauses are non-finite disqualifies them from being CPs. however, as i pointed out, non-finite CPs are well-attested crosslinguistically, so there is no comparative reason for skepticism towards the analysis of for-phrases as non-finite CPs. in addition, as shown in great detail above, all evidence points towards for-phrases being structurally parallel to other English CPs, including that-phrases. there's no reason to think that CPs must be finite. thus, the idea that for-phrases are non-finite CPs is perfectly plausible.

that being the case, it's not entirely clear what the commenter has in mind. however, i think some light can be shed on the objection with the following comment, posted on a different answer:
"In the phrase structure tree, the template is predetermined. Words are inserted into positions in the template. In this case, inserting for into the C position incorrectly predicts that the finite complement should be possible, since it is possible for the other Cs"

to clarify, i do not assume that phrase structure representations are templates into which words are freely inserted. instead, it is known that syntactic representations are constrained by selection relations. we will say that for selects (or "subcategorizes") a non-finite TP as its complement, while that selects (or "subcategorizes") a finite TP as its complement.

it might be helpful to compare this instance of selection to other instances. a straightforward case occurs with determiners. (i will assume for accessibility's sake that N is the head of nominal phrases, not D. the argument works the exact same if one assumes D is the head). notice that the two noun phrases below are considered to have the same structure.

I personally would say that it is not a complementizer.

For instance, if we compare the sentences:

(1) Mark prefers for John to stay

I personally want to think of (1) and (2) as having the complement clause to be about the same, because they are both "(for John) to stay" but (2) has the John implied because it is correferential with the subject of "prefer." Because the "for" part is not necessary to make it a relative, and "to" is already a complementizer that gives the clause the complement status, you can safely say that "for" is not likely to be a complementizer.

Let’s consider first some evidence suggesting that for in I prefer for John to stay is not a pure subordinator. Pure subordinators can take a finite clause as their complement, yet for cannot do this, e.g.

If for were a subordinator like other subordinators, these sentences would be good. Since they are clearly bad, we can indeed conclude that for is not a pure subordinator.

The prepositions and their complements are fronted in these examples in order to avoid the confounding factor of the to-phrases being interpreted as rationale phrases. If the prepositions on, with, and in could take a to-infinitive complement like for can, these sentences would likely be acceptable.

The insights so far demonstrate that for should indeed be granted a special status in the grammar. It has special properties that cannot be captured by the simple designation subordinator or preposition alone. This situation is a problem for standard phrase structure approaches because such approaches are not well-equipped to address lexical idiosyncrasy. Thus, the approaches that BillJ, Tsutsu, Jlawler, Greg Lee, and matan-matika envision above cannot address the status of for in I’d prefer for John to stay in a convincing way, for they lack an appropriate category that captures its distribution. It is not the head of CP, IP, TP, etc. because these categories are all compatible with finite clauses, whereas for does not license such clauses, as demonstrated above with examples (1-2). The category PP is also not appropriate because the P of PP does not take a to-infinitive complement. Indeed, what is a phrase structure grammarian to do?

A dependency grammar (DG) approach is not faced with these difficulties because it conceives of sentence structure in terms of directed links, i.e. dependencies, between words. There is hence no need to force for into the one or the other preconceived category, for it is possible to produce a structural analysis without assigning for to any specific category at all. The DG analysis of the example sentence that I prefer is next: 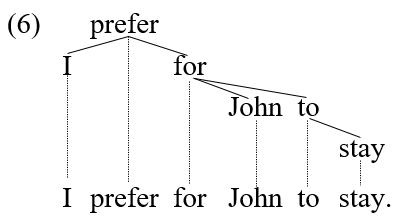 In sum, the question is good because it helps reveal a problem facing phrase structure syntax in general. The phrase structure template of syntactic categories (CP, TP, IP, PP, etc.) is hardly capable of addressing lexical idiosyncrasy. Dependency syntax presents a plausible alternative in this regard, one that has no problem with lexical idiosyncrasy.

Not the answer you're looking for? Browse other questions tagged syntax grammar parts-of-speech clauses grammatical-category or ask your own question.

4
Term for the modified part of a prepositional complement
7
Why does the English complementizer “that” look like the relative pronoun “that”?
2
Classification of adjuncts in preposition phrases
4
if vs. whether (complementizer)
4
What's the name of the elements used to extend otherwise basic clauses?
3
Can “of”, “on”, etc. be regarded as complementizers just as “for” is?