How do you decode the CELT transcriptions?

Is it really this complicated? I am looking at this Irish text on the CELT (Corpus of Electronic Texts) website, and it looks like this (with page lines scattered around):

What is the .xl^. for? And why is adan italicized?

Then there are some big tables further along: 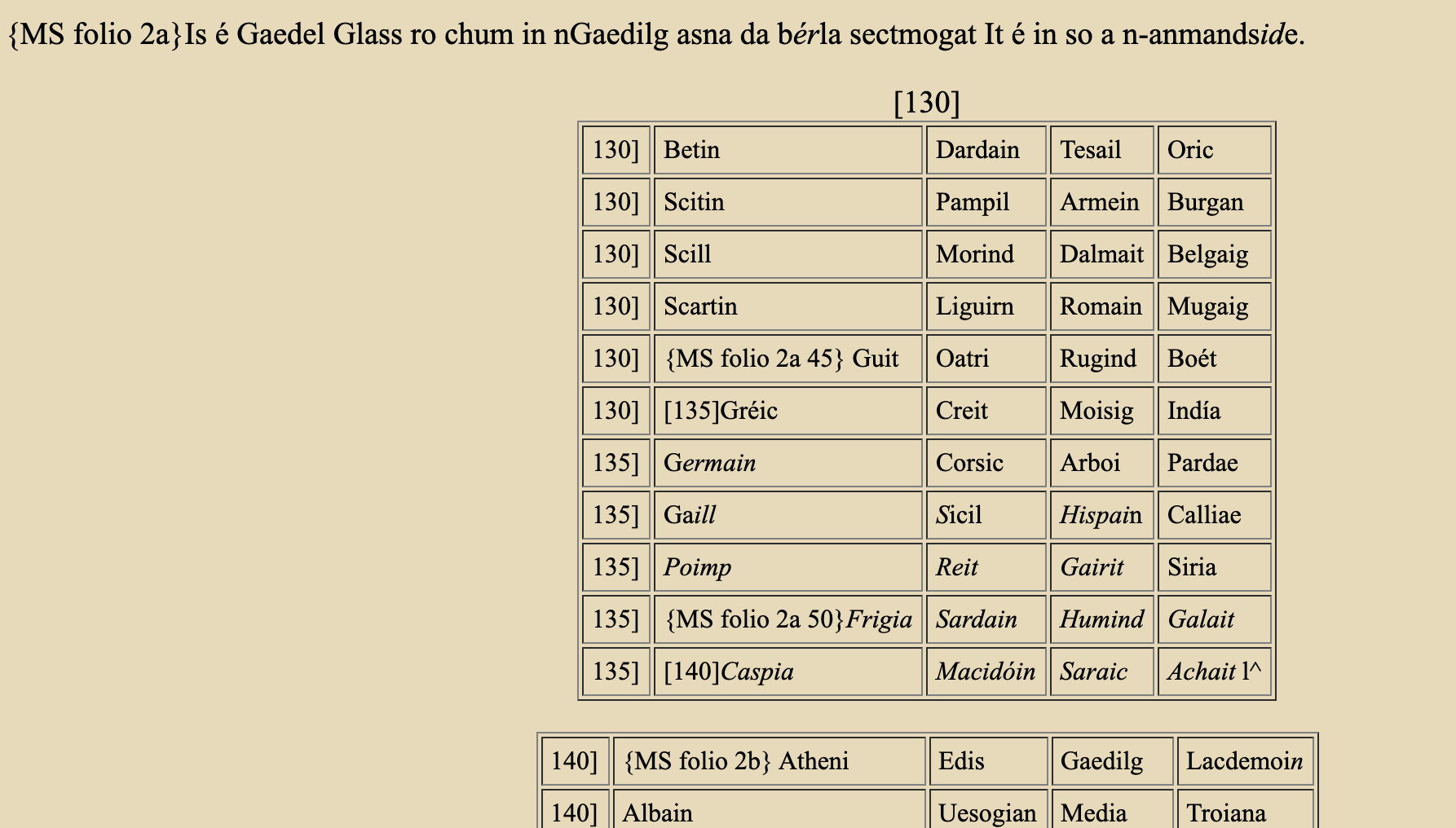 But I guess that's it. Not toooo much. Do you know what these things mean?

It would help in transliterating the Irish text and getting it into a better format for linguistic analysis.

I simply want to know how to parse this one Irish text.

transliteration tools irish
Share
Improve this question
asked May 5 '20 at 18:44

Most of these aren’t CELT-specific, but commonly used in manuscript editions everywhere.

MS is a common English abbreviation for manuscript.

The Latin is part of the manuscript. A very large percentage of mediaeval European manuscripts – and more or less all the Irish ones – are written either entirely in Latin or in some mixture of Latin and a local language. The Irish manuscripts often mix Latin and Irish completely willy-nilly, changing randomly back and forth mid-sentence.

The curly brackets notation can mean different things in different contexts, but here I would guess indicate lines in the manuscript quoted. The introduction says that’s TCD MS 1339, though I have to admit I can’t quite make the text fit with the scans from that MS, at least not here on my phone (word to the wise: phone screens are not conducive to serious manuscript research!).

The numbers with right square brackets do appear to be some sort of line counter, but they seem to be counting continuous line numbers in the digital edition, not the manuscript.

Italic text is text that is written in various scribal abbreviations in the manuscript, which have been undone in the transcription.

The few things that are specific to Irish manuscripts:

The abbreviation .i. is exceedingly common in Old Irish manuscripts – it is short for id ón (more commonly ed ón, now eadhon), meaning ‘that is’ and translating Latin id est; in other words, read it as “i.e.”. (See eDIL, about halfway down the page, look for ed ón.)

Roman numerals are usually surrounded by dots in Irish manuscripts as well, so .xl. bliadhan means ‘forty years’. I’m not sure offhand what the caret (^) means here.

Note: If you’re hoping to do linguistic analysis on the text, you may find you need to do more than just transliterate – Old Irish spelling is notoriously good at being inconsistent, not to mention that phonemically and morphemically important distinctions (like lenition and nasalisation) are frequently not indicated at all, making it impossible to tell from the text alone whether, say, a complex verb has an object or not.

Edit: Just noticed this is Lebar na Núachongbála, the Book of Leinster, so therefore Middle Irish, not Old Irish. That means probably slightly less phonemically challenging, but still plenty of vagueness to be getting on with.

Not the answer you're looking for? Browse other questions tagged transliteration tools irish or ask your own question.

1
Are the Irish laws written in the Irish language?
5
How do we know for sure a transliteration is lossless?
0
How to convert Old Irish Latin script to Ogham?
0
How are the Ogham stones inscribed?