What exactly is Minimal Distance Principle and how is it applied here?

In my previous question, I referred to the analysis of indirect passives in Chinese from "The Syntax of Chinese". They mention "Minimal Distance Principle":

In this structure, the verb dasi ‘kill’ takes the NP baba ‘father’ as its immediate object. The verb and this object form a complex predicate V' that takes another object, the “outerobject.” The outerobject controls the possessor Pro and is in turn NOP-moved to IP, where it is coindexed with Zhangsan under predication. (Both predication and control are subject to a Minimal Distance Principle of the sort first proposed by Rosenbaum (1970), as part of the Generalized Control Theory of Huang (1984a, 1992), inter alia.) We take the standard view that theta-role assignment is compositional. The inner object receives the Patient/Theme role from the verb dasi, and the outer object receives the Affectee role from the V' dasi-le Pro baba.

I looked at Rosenbaum's paper, but I didn't find any kind of precise statement. So with a reference to this analysis for example (the tree is given below), what is Minimal Distance Principle, and how is it applied? 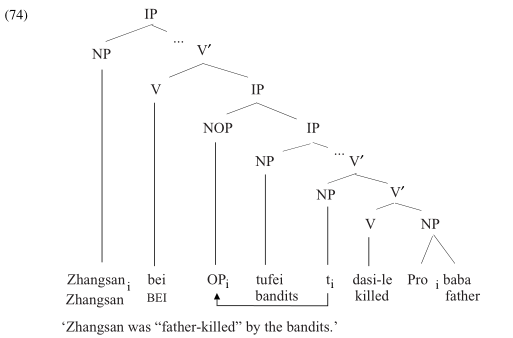 For its interpretation, an S in English needs a subject. However, nonfinite S's in English cannot have subjects. The subject is understood to be the same as some NP in the conversational context -- but which NP? There might be several available. Rosenbaum proposed that if you trace out the number of tree nodes traversed in the tree of the construction going from the S or VP you are seeking an understood subject for, the tree "distance" to a potential antecedent, the correct choice will be found at a minimum distance from the subject-less clause you are interested in.

Thus, for instance, in "John persuaded Hank to stay", where "Hank" is the object of "persuaded", since it takes fewer nodes to cross going from "to stay" to "Hank" than it does to "John". So "John" cannot be the understood subject of "to stay".

The proposal was interesting mainly because it raised an interesting new problem for syntacticians. I'm not familiar with the work by Huang.

5
Difference between PRO and OP

9
How exactly does an obviate proximate system work?
10
Why exactly is *“I Am America (And So Can You!)” ungrammatical?
4
What exactly is the SBAR label from the Penn TreeBank?
0
How is the dative case for help being used here?
3
Do nonfinite (adverbial) adjunct clauses have to be controlled?
6
What constitutes a Long Distance Dependency, and how can it be quantified?
5
Difference between PRO and OP
5
Is "matrix clause" synonymous with "main clause"? What exactly is a matrix clause?