What's the origin of the word "br" in Yemeni Arabic?

What's the etymology of "ber بر", that means "moonlight" in Yemeni?

The nearest words I can find in an Egyptian dictionary and in Amharic refer to light, but in Fuṣḥa Classical Arabic the word nearest to it "barq برق".

ብርሃን bǝrhan is from በርሀ bärhä "to be bright". This is the source of በራ bärra too. ብሩህ bǝruhǝ is probably related, since it has b and r at the start. برق is either the verb baraqa "to produce lightning" or "to shine, glitter, sparkle, flash", or the noun barq "lightning", and comes from Proto-Semitic *bariḳ-. This doesn't seem to be related to the Amharic words, based on the relevant Wiktionary entry. That's all I got unfortunately.

Then I asked K.W. in a comment on Quora, and he replied:

The Wiktionary page برهان - Wiktionary seems to help out with this a lot :).

Also, for the link below, it says the following about “Ethiopic” (another name for Ge’ez). Nevertheless, the source below is still useful: Semitic Words in Egyptian Texts of the New Kingdom and Third Intermediate Period 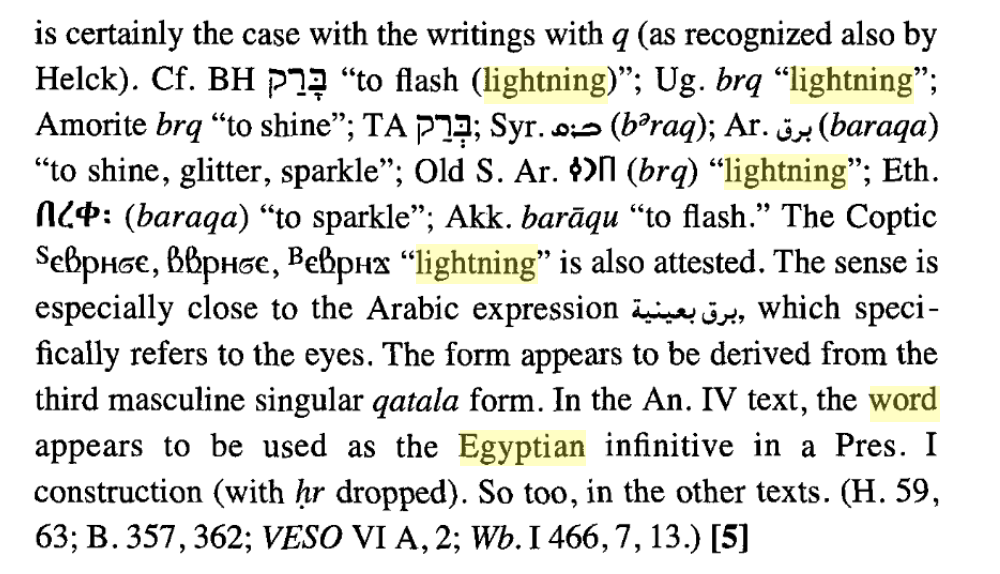 Also, for one small section in the book below, it speaks to some kind of link between the Arabic بر (or برهان in the link/screenshot below) and ብርሃን. Unfortunately, the page before it wasn’t included in the preview, which would have been more clarifying. However, the screenshot was enough for me to recognize a kind of link in some way. Recall again the reference to Ge’ez as “Ethiopic": Ethiopia and the Bible 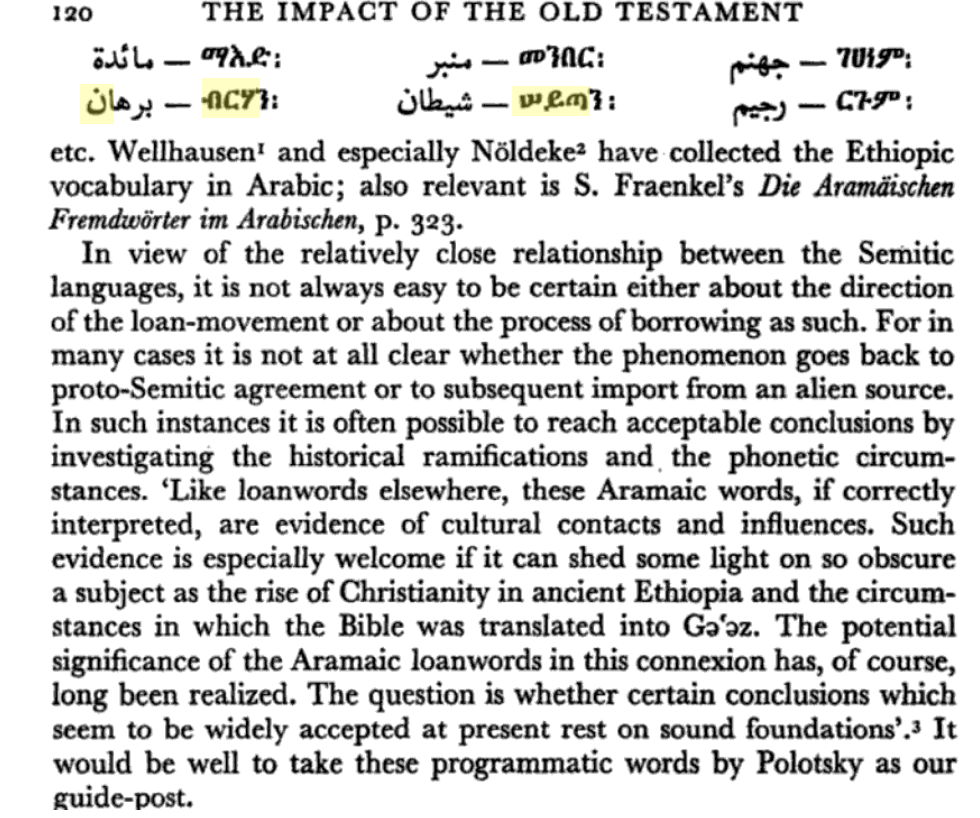 I hope this all helped you out.

Bright and brilliant probably have nothing to do with the above words, since bright is from PIE *bhereg- and brilliant comes, with some steps I skip, from Italian brillare, from Greek βήρυλλος, from Prakrit विरलायते viralāyate, from Sanskrit वैडूर्य vaiḍūrya, a Dravidian loanword (wait, Dravidian veḷur was borrowed into Persian and Arabic? As what word?), and I'd say it's far more likely for the above Afro-Asiatic words to be related to ber than for the English words to be.

Not the answer you're looking for? Browse other questions tagged historical-linguistics semitic-languages african-languages or ask your own question.

0
What is the origin of the Arabic word دزينة (dazina)?
0
what is the etymology of Hebrew word lasse‘irim לַשְּׂעִירִם
0
The origin of a common word for tongue/language?
1
Arabic word for door from root d-l-t or d-l-th
0
is english excellent and arabic galaal related?
4
Origin of the ا that ends the past tense of Arabic verbs for هُم?
2
Are there spaces or other marks between word in Ancient Semitic epigraphs?