What is the position of the subject in a Greek sentence, whose word order is VSO?

The following is a Greek sentence

Its counterpart in English is

To which friend do you think that the man speaks?

In Modern Greek, the word order is freely variable. In the Greek sentence above, the verb is positioned to the left of the subject.

I'll answer based on my familiarity with Greek from other authors, e.g., Embick, Alexiadou, etc. This is a wh-movement sentence.

The PP to which friend was moved from an embedded position as the object of the verb speak into the higher Spec,CP to form a question. VSO here is a derived word order where the verb moves to I but the subject remains in Spec,VP.

VSO is accounted for under the left empty position in Spec,IP (embedded). In other word order patterns, e,g., SVO, then the subject moves also to Spec,IP.

1.The subject the man is generated in Spec,VP.
2. It cannot be a sister to V, because V's sister is an object (PP; i.e., to which friend).

Based on the Tutsu's answer and the ensuing comments, there is confusion about how to deal with such data. The phrase structure approach as presented in Haegeman (2006) and as advocated for by Tutsu and many others is a dense and complex approach to syntax. There is a simpler way to address sentences like the one from Greek in the question. The answer I now produce touches on some of the points from the comments, in particular concerning the inclusion of tree diagrams in answers and the status of so-called non-configurational languages and analyses.

Assuming a dependency grammar (DG) approach, the answer to the first question is that ο άντρας 'the man' is a postdependent of μιλάει 'speak', and the answer to the second question is "Yes, the subject NP is a sister V" insofar as if one converts the dependency analysis to a phrase structure analysis, the resulting tree would have ο άντρας 'the man' as a sister of the verb μιλάει 'speak'.

Part of the difficulty with the sentence is due to the presence of a discontinuity (i.e. a long distance dependency). The prepositional phrase Σε ποιόν φίλο 'To which friend' is a complement of the embedded verb μιλάει 'speak', which appears to right of the matrix verb νομίζεις 'think'. This situation results in crossing lines in the tree structure. Regardless of what type of tree analysis one produces, dependency or phrase structure, one has to have a means of addressing such discontinuities. Movement is of course one prominent means of doing this. Another, and one which I prefer, assumes feature passing through the tree structure from displaced constituent down to the governor of that constituent.

The next tree shows the presence of the discontinuity on a DG analysis: 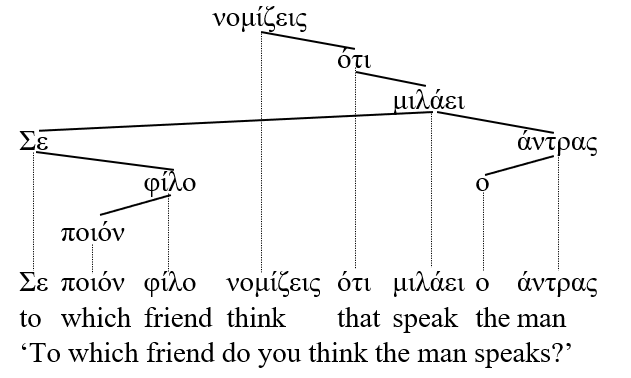 The crossing lines identify the discontinuity. An approach to such discontinuities that assumes feature passing might look something like this: 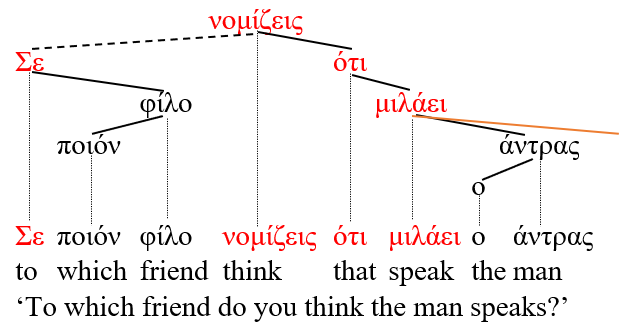 To provide a point of comparison, the English translation given for the Greek sentence is also analyzed here in terms of dependencies as follows: 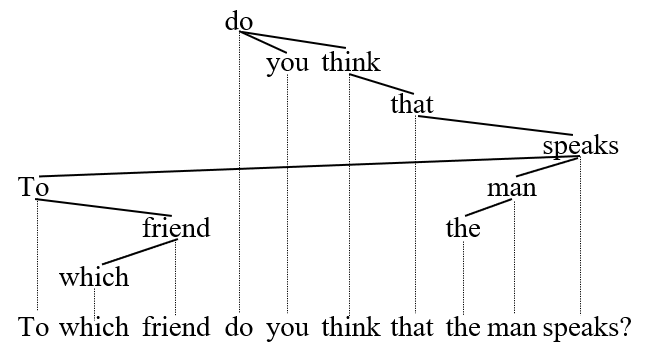 The DG analyses of the Greek sentence above are consistent with claims about non-configurational languages more generally. The key trait of such languages is that they reject the existence of a finite VP constituent and thus have flatter structures. DG by its vary nature has always denied the existence of such a constituent for all languages, including English!

Finally, I produce such trees using the drawing commands in Microsoft Word. Producing such DG trees is relatively easy once you get the hang of it. I can also use Microsoft Word to produce phrase structure trees, although such trees demand more effort because they are more complex by their very nature.

Not the answer you're looking for? Browse other questions tagged syntax syntax-trees greek word-order vso or ask your own question.

11
Why are affix hopping and head movement considered as distinct operations?
6
Is the commutative CFG in the mathematical linguistics literature?
3
How do isolating VSO languages differentiate the subject and object?
4
Syntax: How can this tree be built?
4
Is lambda calculus only applicable if syntax trees are binary branching?
3
Is there a grammar of syntax that takes into account inherent syntactic ambiguity in natural languages?
6
V to T movement in German
2
Understanding why Antisymmetry gives us SVO and not SOV