I'm looking for an example sentence with a non-projective dependency parse. It doesn't have to be in English, though such an example would be nice.

computational-linguistics grammar
Share
Improve this question
edited May 5 '13 at 12:36 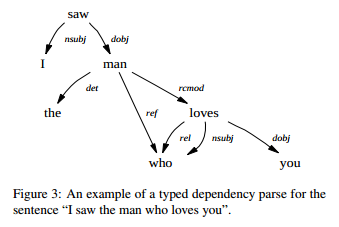 Here's a different way to look at it: you draw the dependency tree above the sentence with each node aligned with the corresponding word in the sentence, draw a line between the words in the tree and their correspondent in the sentence, and check whether there are any lines intersecting.

The structure below is for the French sentence À qui veux-tu que Pierre parle ? (lit. To whom want you that Peter talks?, 'Who do you want Peter to talk to?'). This sentence is non-projective because à qui has sort of "emancipated" from its governor to position itself relatively to veux. The dependency between parle and à crosses three node projections. 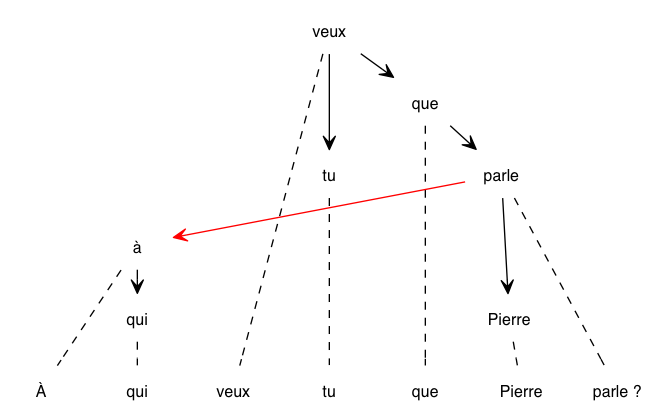 Here is a short English example from the paper Non-Projective Dependency Parsing in Expected Linear Time:

Or, if you want it in Universal Dependencies,

Here is the LaTeX code to generate the latter:

Not the answer you're looking for? Browse other questions tagged computational-linguistics grammar or ask your own question.

1
Which other languages have discontinuous dependencies and how are cross or long ones managed in them?

2
Is there a computer program/script that can match a verb with its various conjugations?
2
How to detect verb in a sentence where the verb is invisible in the sentence?
3
How to interpret the dependency parse tree of an English Slot Grammar?
2
How can you know that a word in a sentence is a verb?
5
Example of a tenseless sentence
4
Rule-based or Statistics-based approach for generating plain language grammar rules from a text
1
Mapping duration mentions to their actual verb event
2
Non-projective tree sentences