There is a major problem in this area. The tests for identifying constituents employed in the same phrase structure grammars contradict this starting assumption concerning individual words as constituents. Most individual words fail the majority of tests for identifying constituents that are employed in syntax and grammar textbooks (e.g. topicalization, clefting, pseudoclefting, answer fragments, proform substitution, etc.). A bit of time spent reading the Wikipedia article on the constituent unit makes this point clear. That article discusses the constituent structure of the sentence Drunks could put off the customers. Of the six words present in the sentence, only one of them, i.e. the subject nominal Drunks, passes most of the tests. The other five fail most of the tests. The next data set and those further below are taken from the Wikipedia article; they illustrate that the other five individual words do not behave as constituents with respect to the tests. The first examples are of topicalization:

The next questions derive from this insight. Isn't this a problem for phrase structure grammars, and if it is not a problem, why is it not a problem? Should the term tests for constituents be renamed to something else, perhaps to tests for phrases, since many (but certainly not all!) phrases pass most of the tests? I of course have a concrete opinion about all this, but I am respectfully requesting that the phrase structure people here share their views and understanding.

I only wanted to write a comment but I’d like to include a tree so here’s a more detailed answer. First of all, constituents are defined by context-free rules, not by tests. The tests can be used to devise the rules but they’re defeasible implications. Even if they were material implications, if one is true, the converse needn’t be. But this is elementary. 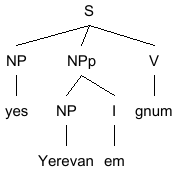 This is completely uncontroversial, there’s no alternative sensible way of parsing the sentence. The point here is that the enclitic auxiliary is a pragmatic marker and moving the NP Yerevan around the sentence drags the auxiliary with it (since it needs to remain focus marked). So Yerevan is the categorial head of the auxiliary, but at the same time the auxiliary is the dependency head of Yerevan — by virtue of being a cohead together with the main verb but this isn’t germane here. The point is, it doesn’t make sense to apply constituency tests to single words (in the sentence at hand the auxiliary could be dispensed with if the verb were in future tense) and the obvious (but apparently still worth pointing out) point is that a true implication doesn’t make its converse true.

I’ve digressed a bit — the short answer is that individual words (more precisely their preterminals) are constituents by definition.

Edit: A similar example would be “Robert goes to Yerevan” with the subject in focus, i.e., with the auxiliary farther away from the main verb. The auxiliary is the verb “to be” which can also serve as a copula. 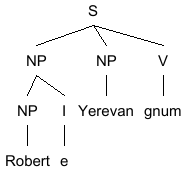 17
What empirical evidence can be produced that all syntactic structure is binary branching?
3
Predicate vs. Predicator
2
Are there names for the individual diphthongs?
4
In 'Kim is tall', is 'is tall' a VP?
6
What is the difference in a constituent and a phrase?
2
Why must 'that' be omitted whenever constituents are questioned?
3
Constituency Tests