Do formal language theory have concepts corresponding to dependency grammars?

If I am correct, phrase structure grammars in linguistics are the grammars for recursively enumerable languages.

Do formal language theory have concepts corresponding to dependency grammars, the concept in contrast to phrase structure grammars in linguistics?

What you are asking about is called abstract syntax tree (AST) in the theory of formal languages. Consider a simple grammar for arithmetic expressions and the following input string: 2/(3-4). It has the following concrete syntax tree (CST): 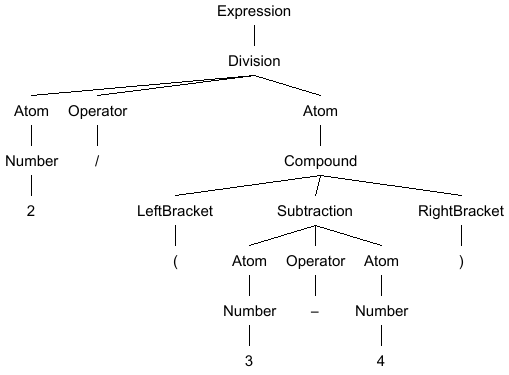 Note that the nodes of the AST are the leaves of the CST so an AST is to CST as a dependency tree is to a phrase structure tree. There are more analogies — note that some leaves present in the CST are missing from the AST (the brackets) because they’re ancillary — they aid the parsing process but don’t contribute to the meaning of the expression. There are some more analogies such as complex predicates but that’s more involved.

Knuth’s attribute grammars are the mechanism for parsing that builds up both trees in step.

Yes and no. The same sources of recursivity in syntax, i.e. coordination and embedding, exist in both phrase structures and dependency structures. Both broad approaches can also be formalized in a way that is mathematically rigorous. For instance, one of the earliest articles on dependency grammar, i.e. Hays 1964, demonstrated that the rewrite rules (which allow for recursivity) associated with Chomsky's first works on syntax can easily be rendered in terms of dependencies. Igor Mel'cuk, the dependency grammarian behind the grammar framework known as Meaning-Text Theory, has always emphasized the importance of mathematical stringency when producing definitions of linguistic notions. In these respects, the answer to your question is "Yes".

Putting the emphasis on formalism aside, the great advantage that dependency syntax has over phrase structure syntax is its simplicity. I can teach novice linguistics students to produce dependency analyses of basic sentences in an hour or two. The same cannot be said of students learning to produce phrase structure analyses. Consider the next two tree structures in this regard: 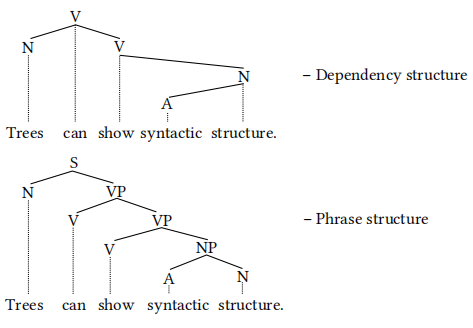 I think a comment concerning the value of formalization in linguistics is also appropriate. Heavy formalisms are difficult to penetrate for most people, and they are therefore often not helpful. In fact, over-formalization can be a means of masking the fact that the linguist behind the formalisms does not have much to say that is insightful, for if they actually had something insightful to share, they would express that insight in a manner that is accessible to a wide audience.

Not the answer you're looking for? Browse other questions tagged dependency-grammar or ask your own question.