It is generally agreed that the Greek letter San developed from the Phoenician Tṣadē, but I'm not sure I see the graphical similarity. The Phoenician form

does bear some resemblance to the Greek form

and even to the more common Greek form

, but the resemblance doesn't seem that great to me, and there is evidence to suggest that the Greek alphabet was developed at a time when Tṣadē was drawn more like a Y, as shown on the Izbet Ṣartah abecedary: 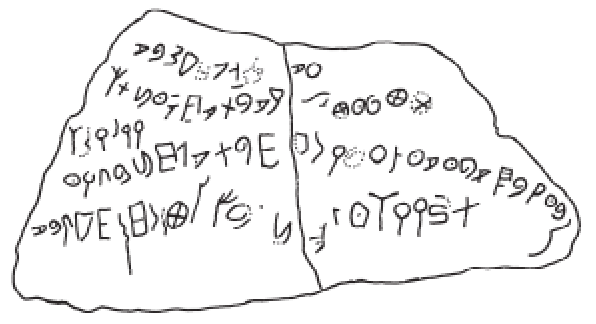 How did the shape evolve?

Browse other questions tagged alphabets or ask your own question.

12
Is there an active alphabetic writing system not based on the Phoenician or the Brahmic lineage?
3
Was there an evolution of the Greek alphabet in the Middle East?
6
Why are some scripts' names derived from their first few characters?
1
Arabic word for door from root d-l-t or d-l-th
10
Why is Greek alphabet left-to-right?
4
Where does the letter <j> come from to Slavic Cyrillic alphabets?
3
Why did Χ and Ψ have such different sounds in early Eastern and Western Greek?