Why are Slovak and Belarusian languages very related to each other while the two countries are geographically far from each other?

in this site, I found the fact that Slovak and Belarusian are very closely related. the lower the percentage, the more related the two compared languages.

Why are these languages very related to each other while they are geographically distant? 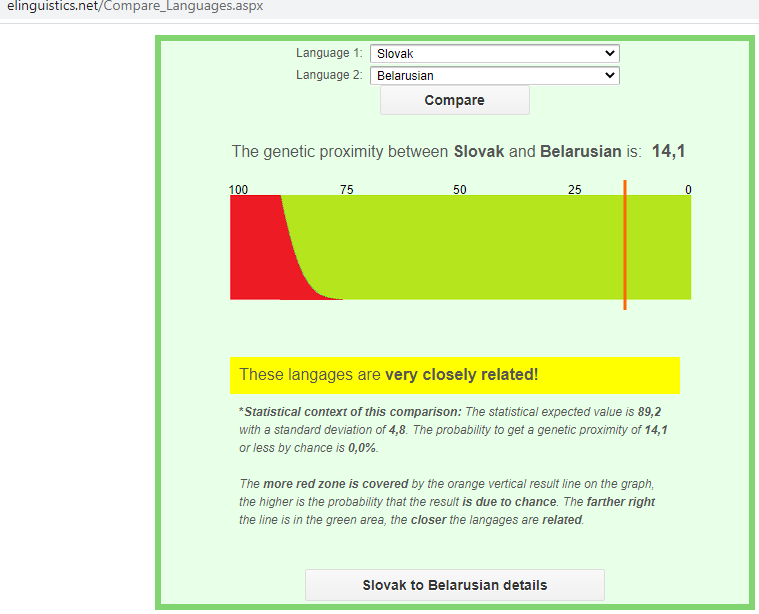 It is well known that Slovak and Belarusian are members of the Slavic language family, so there is obviously some degree of relatedness. Whether or not that particular website has a reasonable metric of linguistic relatedness is a matter that we could discuss at length (but we won't). Typically, such computations are based on lexical similarity, and I will assume that is there case here.

The right linguistic question to ask is comparative: is Slovak "closer" to Belarusian than it is to Czech?; is Belarusian closer to Slovak than it is to Russian? And are the computed numeric differences statistically significant. If the website say that Belarusian and Slovak are closer than Czech and Slovak, I think we would have to conclude that their computation has a problem. Also, incidentally, Czech and Slovak are not single monolithic languages, they are dialect clusters. Then adding in a geographical variable, you can ask to what extent computed closeness correlates with "distance". But of course you have to have a metric of physical distance, which is what? You probably should not pick the two most-separated spots where Slovak and Belarusian are spoken, which are about three time the distance from the nearest spots in Belarus and Slovakia.

In other words, we don't yet have a linguistic puzzle to explain.

Not the answer you're looking for? Browse other questions tagged comparative-linguistics or ask your own question.

10
Why do languages have different syllable complexity from each other?
16
Do linguists measure the relation distance between languages? How?
8
What are the exact relations between Slovak and Slovene?
7
Why are the plural and singular first person forms of the verb "go" so different in the Romance languages?
9
Are there any known natural languages in which tense is never (or very rarely) expressed through the modification of verbs?
3
Do more closely related languages, have more similar Zipfian distributions?
16
Are Hungarian and Turkish related?
7
"Ring species" as dialect continuum?
2
Languages in which vowels predominate