Why did English stop using thou?

I will attempt to answer this, but please understand that it is more of a guess since the comments to your question are correct. This may not even be the kind of question that can be answered here.

Remember that thou was more than just the "second person singular" - it was later an informal pronoun as well, and picked up connotations of referring to someone of lower social standing than yourself. We can see different usages frozen in time in different contexts (religiously, thou lingered with a different connotation than it did in the phrase "holier than thou" or "Get thee gone!"). The meaning probably still continues to change*.

Once "thou" had the connotation of suggesting the lower social status of someone, you can see how this would become problematic in a society that was becoming increasingly egalitarian (and perhaps still is). At some point, the old "familiar" usage is polluted with a tinge of disdain/inferiority that was inappropriate for the context and it was preferable to borrow another form to show that the speaker was not presuming his own superiority.

There's an answer here to this frequently-asked question.

In fact, lots of people kept using thou and got into trouble for it.
This is one reason the Quakers emigrated to Pennsylvania.

I believe @MarkD's answer is on the right track. I have noticed that in Shakespeare it is quite common for one character to address another as "thou" who in turn addresses him as "you". Particularly I have noticed it between masters and servants and men and women.

In contrast, in the novel "The Man Who Ended War" (1912) has this exchange between an American journalist and a servant girl in London:

" I was very much in­ter­ested in the story your mis­tress told me of the falling shut­ter," I said, slip­ping a half crown into her ready fin­gers." I should very much like to know if any part of the old shut­ter is by any chance in ex­is­tence."

The maid's eyes glis­tened, as she glanced sur­rep­ti­tiously at the coin in her hand. " Wreck's down in t' wash'oose," she said.

" You're from the Coal-pits or the Mines," I said, smil­ing as I heard her di­alect. A dim flush showed in her sal­low cheek. " I'm fra about there, sir. Hast ever been there ? There's none like it."

" I've been there," I an­swered, smil­ing again. " There's some fine men there." Her eyes lighted once more. " Hap­pen thou might like to see wreck ? Canst, if thou wish."

She clearly does not see "thou" as referring to someone of lower social standing since she is using it to address a man of higher class whom she sees as a source of tips. Perhaps using "thou" is not seen as condescending by those who speak her dialect and as a result has not fallen into disuse.

Interestingly, in modern Russian the word for "thou" is used much more widely than "thou" is used in Shakespeare. But, it is used in an egalitarian way. Only a large age difference allows one person (the elder) to address another as "thou" while himself being addressed as "you". Other than that the choice of "thou" or "you" is dictated by the relationship between the speakers with both using the same word. If they are family members, fellow college students, or brothers in arms they both say "thou". If they are professor and student or customer and clerk in a store or government official and citizen, they both say "you".

Note: the usual caveats of asking why about language change apply.

All the answers making some social theory about T-V, social class, bibles and so on fail to explain why these factors would not apply to every other language and society with T-V, social class and bibles.

In fact, the rise of you - the 2nd person accusative - to replace thou, thee and ye is far more compatible with the broader loss of case and morphology in English, obviously not total, but enough to make English fundamentally different than Old English and most other Germanic languages. 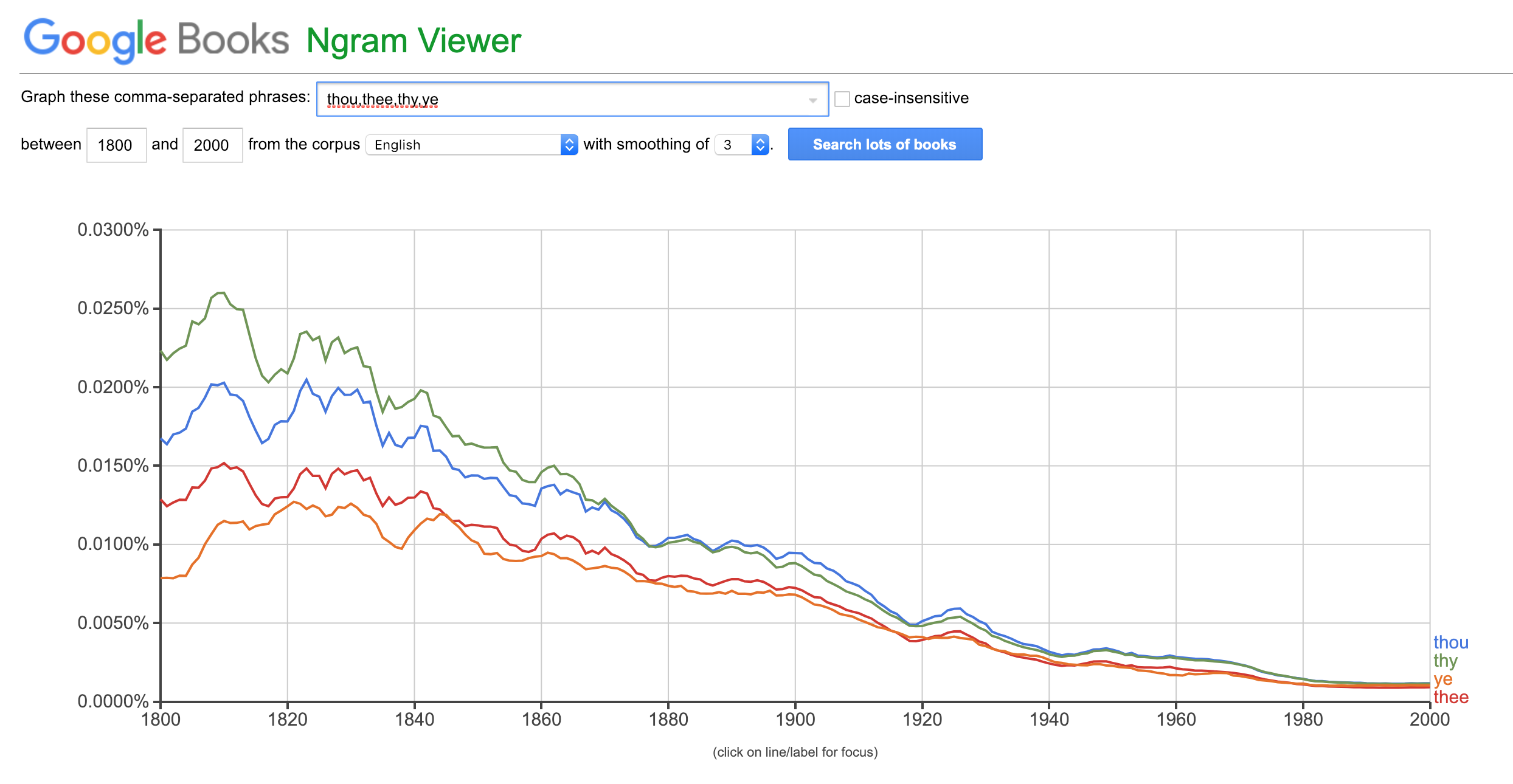 you seems to have an exact parallel in Dutch, and also in Haitian Creole - a Romance language - and the accompanying use of word order like SVO. And indeed there is a Middle English creole hypothesis, and systematic loss of case in Dutch.

An argument can also be made that there was collapse happening in Dutch, Old French, Old English even earlier, because French subject and object forms are collapsed for 1st and 2nd person plural, and Vulgar Romance and English accusative and dative collapsed.

This process is, by the way, still ongoing in Modern Scots, one of the languages most closely related to English. Another somewhat similar case is that of você in Brazilian Portuguese.

I listened to this podcast where Teresa Bejan, a grad student, claimed "thou" fell out of favor because it was too informal. It was too informal because people were infatuated with royalty.

A monarch referred to himself as the royal "we". People wanted to use the plural "you" to confer formality. It always helps to compliment someone you don't' know! So this became the more formal version. Eventually thou became associated with a downgrade, and people forgot about the royalty thing. So everyone just used "you" to avoid making a fau pax in conversation.

Thou art asking a good question, so I shall answer thee! There is something the others aren't telling thee that'll help explain this better.

Thou/thee was informal, ye/you was formal and also the 2nd person plural form, so eventually people became more polite and used the formal/polite you over thou, but if this were the case then why hasn't french/spanish/italian/german gotten rid of thou? The reason is verb economy, with thou 'tha' had to conjugate with a 'st' ending, thou walkest thy dog on saturday, dost thou not? 'you walk your dog on saturday, don't you?' In french and german it isn't more economical to say du/tu over Sie/Vous, so they kept their 'thou' (du/tu), that's why we lost thou over time.

Not the answer you're looking for? Browse other questions tagged english historical-linguistics pronouns formality or ask your own question.

26
Why did English lose declensions while German retained them?
4
2nd person convergence in other languages than English
4
Portuguese: Inconsistencies in use of second person pronouns and conjugation
1
Why "were" for subjunctive?
14
Is English unusual in having no second person plural form?
2
Did/Do most languages use a similar pronoun to the plural for formal singular?
1
Why was 'u' invented?
6
Why do two English personal pronouns — "you" and "it" — lack an objective case?