Does any Sanskrit noun stem end in e ए?

Sanskrit nouns stems ending in dipthongs are very rare but I could still find examples of at least one stem each ending in every dipthong except e‌ ए.

But I could not find any noun stem in e ए. Every book or online tutorial that mentions dipthong ending noun stems mentions only these these but they say nothing about e. Is there any noun stem ending in e ए in Sanskrit? 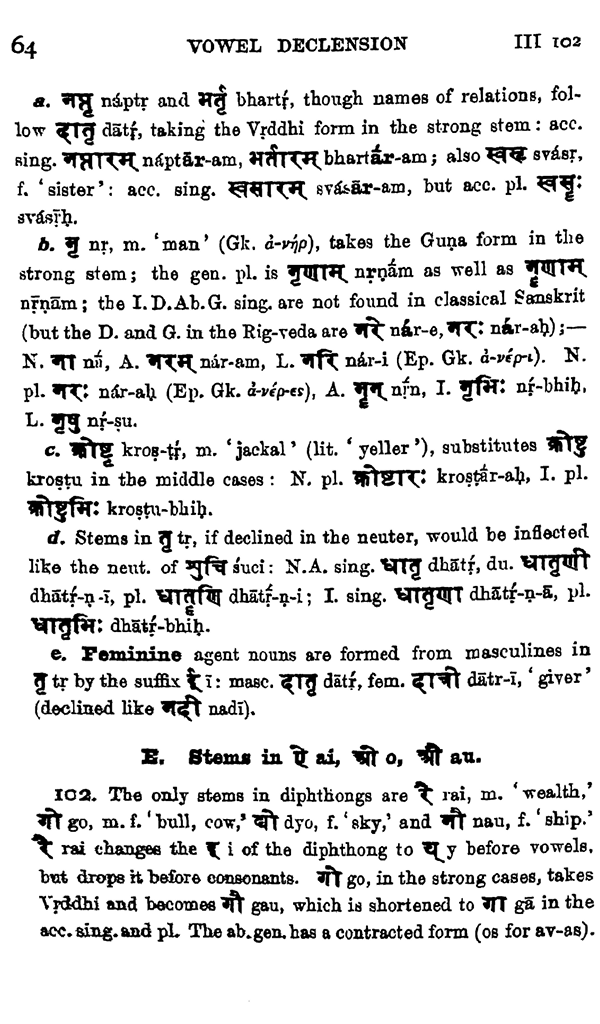 Yes, Sanskrit has stems which end in e. Examples are the sup pratyaya (nominal suffix) ṅe or the tiṅ pratyayas (verbal suffixs) e, se, te, āte, ante, dhve. These pratyayas (suffixs) when used as nouns can take all the vibhaktis (declensions). You would find them being used in sanskrit commentaries and grammar texts.

Ex: the Pāṇini sūtra 7.1.13: ṅer yaḥ - here ṅe is treated as a noun ending in e-stem, and declined in sixth/genitive case.

Another example is Harināmāmṛta-vyākaraṇa sūtra 162: kṛṣṇāt ṅer yaḥ
After a masculine word ending in a-stem (called Kṛṣṇa in that grammar) ṅe (the dative singular suffix) is replaced with ya. One finally gets kṛṣṇāya from this.

Another example is the single letter e which means Lord Viṣṇu according to Ekākṣara-kośa, which is declined as follows:

Monier-williams Dictionary also gives the word ve - a bird and se - service (f.) and serving (n.). It is declined like above.

Not the answer you're looking for? Browse other questions tagged sanskrit or ask your own question.

1
Is there any Sanskrit-Greek-Latin-English dictionary available?
3
Gemination in Sanskrit and Pali
6
Sanskrit pangram joke?
0
Doesn't Sanskrit use adpositions of any kind?
0
Is Sanskrit 100% phonetic?
2
Sanskrit consonant clusters