How can one fill out the quadrat when a word consists of a single uniliteral?

In Egyptian hieroglyphic writing, glyphs are commonly arranged into quadrats (blocks) to minimize empty space. And I was taught that it's good style not to have a word boundary within a single quadrat.

With longer words, there's usually significant freedom to add, remove, or rearrange signs (for example, adding or removing phonetic complements) to make this work out. However, sometimes a word consists of only a single consonant, like r "to [somewhere]", n "to [someone]", or n "not". All of these signs are wide and short.

If I'm writing these signs in a horizontal context (like in the excerpt below), what options are there to fill out the rest of the quadrat? Or is this sort of empty space just unavoidable?

Surely it's very common to have just one symbol as a block, even if it's a flat one, just look at any Ancient Egyptian text, there are lots of such signs in practically every text, even a short one. For example, this one, the text on the left reads “Overseer of sculpting, Itjau”; the three rows of hieroglyphs above the statue read “Statue of the courtier, overseer of priests, Henenit the Black”: 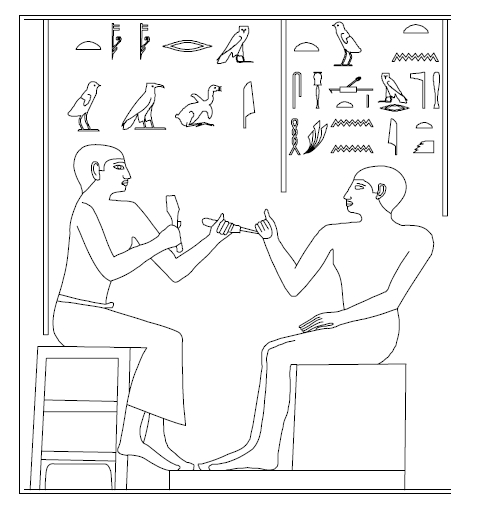 The r and t in the top line on the left stand alone, although the m owl could have well been made smaller and put over the flat r, just as it is done in the middle line on the right. The idea behind grouping the hieroglyphs into blocks was not to make them be “arranged into quadrats”, but only to look nice, so if a flat one standing alone looks nice on the wall, it will surely be put that way, the aesthetics was the point.

Besides, in real life, nobody wrote the way you have it in your image, hieratic or demotic cursive forms were used, in hieratic you could vary the shape and size of such symbols making them nicely fill the block, and in demotic they actually wrote symbols in a line like we do, and not in blocks. By the time the Great Pyramids were being built the full shape of the signs had already been know only to the most indoctrinated priests, even common scribes couldn't read them. They still used the full shapes for millennia, but just for the religious purposes in monumental art, those shapes were sacred, although 99.99% of Egyptians couldn't read them. The full shapes of the hieroglyphs used now in printed books is just a matter of modern standardization and it facilitates typesetting and printing, the hieratics can hardly be turned into a proper computer font. As for the demotics, they are not even transliterated in the full-shape hieroglyphs, the Latin transliteration is used instead.

Not the answer you're looking for? Browse other questions tagged orthography egyptian or ask your own question.

6
Can you measure the rate of drift?
8
How can I distinguish modern Scandinavian languages at a glance?
7
How can I calculate if the difference between two word frequencies in one corpus is significant?
5
When was the first bicameral script developed?
7
Why are the phonemes of Tutankhamun's throne name transliterated out of order?
4
Where can one find reconstructed vocalizations for (any stage of) Egyptian?
1
How do Egyptologist layout the Hieroglyphs when they print it in books?
1
How consistent are the Egyptian Hieroglyph carvings orthographically?