I believe the Czech linguist Karel Oliva mentioned it somewhere that analytic languages are like a hill - one can make a progress relatively easily from the beginning but there's always more to learn (phrases, idioms) while synthetic languages are like a table mountain - it starts with the need to learn all the conjugation and declension but perhaps requires less phrases and idioms later on to communicate on the same level. It sounds logical, however, I wasn't able to find any studies which would confirm or deny this notion. Are there any?

Complexity in languages is usually designated with trade-offs. As shown in Complexity trade-offs between the subsystems of language by Fenk-Oczlon & Fenk (2008): 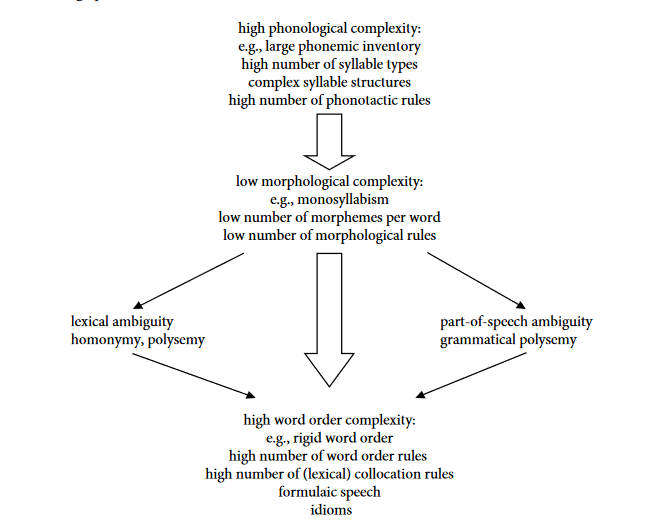 The difficulty of language learning, if viewed as an extension of the actual complexity of the language itself, may be considered impossible to quantify. They go on to state the following:

Menzerath’s (1954) law points to complexity trade-offs on the intra-language level, and our results (Fenk & Fenk-Oczlon 1993 and present study) point to such trade-offs in cross-linguistic comparison. Such cross-linguistic trade-offs or balancing effects gave rise to the attractive idea of something like an equal overall complexity in all our natural languages. We agree with the arguments by e.g., Miestamo (this volume) that there is no possibility to verify such a hypothetical equality and would like to stress the fact that this idea of equality is in no way supported by those correlations pointing to balancing effects.

Not the answer you're looking for? Browse other questions tagged linguistic-typology language-acquisition or ask your own question.