Why are J, U, W considered part of the basic Latin Alphabet?

J, U, W are included in ISO basic Latin alphabet which consists of 26 letters. However,

Why were J, U, W included? Is it just a coincidence that English is the only major language that used all these letters and no more in its orthography?

Related: Does any language using the Latin alphabet have a unique name for "w"?

A lot of early work in electronic transmission of text was done in America, and as such, the early codes used were designed pretty much exclusively for English. It's the same reason why American varieties of Morse code didn't have codes for ß and ø, and why American typewriters didn't have keys for them: they just weren't needed for English, and including them was an additional expense for not much benefit.

In the 60s, American manufacturers standardized "ASCII" (the American Standard Code for Information Interchange) to make it easier for their devices to talk to each other—without any particular consideration given to other languages, for the same reason as with typewriters and telegraphs. And due to the significant influence of American tech manufacturers, the original seven-bit ASCII eventually got enshrined in international standards; variations like eight-bit ASCII and eventually Unicode tended to extend it, not modify the core of it, with non-English letters like ß and ø relegated to higher codepoints separate from the English alphabet.

And thus, the "ISO Basic Latin Alphabet" is just a fancy name for the English alphabet, circa the 1960s and 1970s when these standards were first devised. It's a historical accident, really, nothing more.

Is it just a coincidence that English is the only major language that used all these letters and no more in its orthography?

Is it a coincidence? No.

But that's not the right test, because there are other letters that are not core to the orthographies of all major languages. (k, y, x and q, for example).

A more consistent test then would be if the letter is used in the orthographies of multiple major languages. And on that, j, u and w certainly qualify. 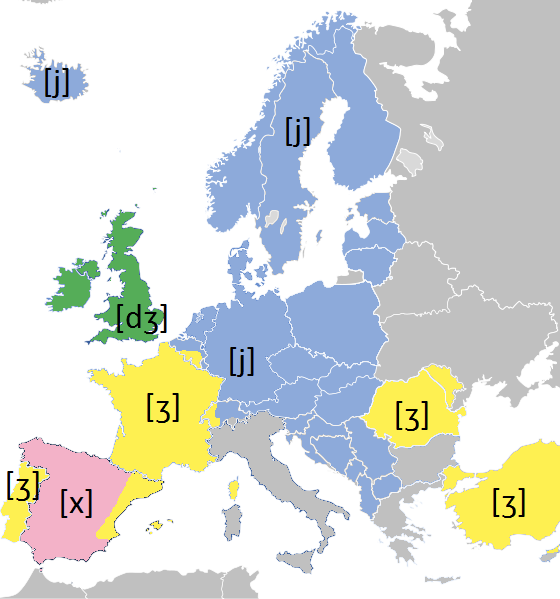 A map of pronunciations of j, and thus implicitly of where j is used. In fact, j does have a pronunciation in Italian, where it is still used in family names and placenames, and pronounced similary to i in the modern orthography.

6
Does any language using the Latin alphabet have a unique name for "w"?

17
Is there any point in the current ordering of the letters in the alphabet?
5
Is the Ampersands a Letter in the Latin Alphabet?
6
Are there any latin-alphabet languages written right-to-left?
1
Why does the NATO Spelling alphabet contain words with more than two syllables
1
Why are E and É both part of the Hungarian and Icelandic alphabets but the English and French alphabets only have E?
17
Are there modern languages without standardized spelling? If not, why?