What is Ugaritic "Ž"?

However, I haven't been able to find any source talking about a "Ž" in Ugaritic: Pardee doesn't list it in his orthographic charts or in his overview of the phonology, for example, and there's no codepoint for a "Ž" character in the Unicode block.

Astour mentions it's unclear if the first glyph in the quoted name is Ž or Ġ ("ghain", 𐎙), if that's at all helpful. There's one glyph in the alphabet whose pronunciation and transcription are uncertain ("ssu", 𐎝, alternates with S in some words), but that looks nothing like ghain.

So: what is this "Ž"? Is it an outdated name for some other glyph, or part of a superseded theory? (And if so, what is its modern equivalent?) Or is it something else entirely, e.g. a special character used in transcribing foreign words?

In the monograph Угаритский язык [1965, Сегерт С.] (“The Ugaritic Language”, 1965, by Stanislav Segert), page 22, section 3.14, the author states that in the latest stages of the existence of Ugaritic its interdental consonants changed their pronunciation: ṯ began to be pronounced as š and ḏ as ž. A screenshot: 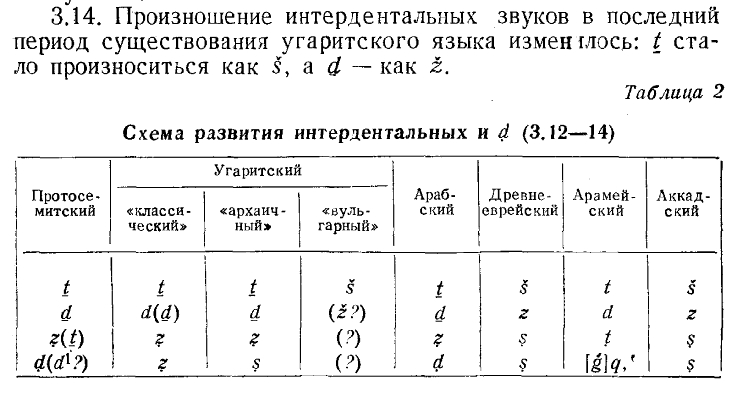 The chart is titled “Scheme of development of interdentals and ḍ”, the columns from left to right are: Proto-Semitic; Ugaritic, subdivided into “classical”, “archaic”, and “vulgar”; Arabic; Classical Hebrew; Aramaic; Akkadian.

Note that the Soviet book is also from 1965, just like the article you gave a link to, and ž is also followed by a question mark.

To add on to Yellow Sky's excellent answer, and based on suggestions by Vladimir F in the comments, here's an excerpt from Segert's later A Basic Grammar of Ugaritic Language (1985):

Emphasis mine. So this glyph is likely a dhal (𐎏), which looks similar enough to 𐎙 to be ambiguous if the scribe wasn't careful.

EDIT: Thanks to Alex B, here's another passage, from Sivan's Grammar of the Ugaritic Language:

It would appear that the shift ḏ > d took place in Ugaritic after the invention of the Ugaritic alphabet (in contrast to the shift ḍ > ṣ [cf. below] which has taken place prior to the use of that alphabet, since ḍ is not represented at all in Ugaritic writing). Once the shift ḏ > d occurred, the sign for ḏ was left devoid of meaning. Therefore, the Ugaritian scribes began to use it for representation of a foreign sound (particularly in Hurrian words and in foreign personal names). There are those who claim that the ḏ-sign was pronounced ž (cf. Garr 1986:47 n. 21), but there is no firm basis for this.

Sivan goes on to cite an instance where expected *šd is written ḏd, possibly indicating voicing assimilation, though there's not enough evidence to say anything conclusive about it.

3
What is the consensus on Sumerian auslauts?
2
What is known about the Hurrian "wa" compound signs?
7
What is Ś in Sumero-Akkadian cuneiform?
3
What are good references on Eblaite cuneiform?