What's going on with ŠÁR?

While most cuneiform signs are made up of wedges, hence the name, there seems to be one striking exception: the sign ŠÁR (aka ŠAR₂ aka 𒊹). Some sources (like the Hethitisches Zeichenlexikon) list it as identical to ḪI, a pattern of four small diagonal strokes, but others (like the PSD, or my browser's default font) show it as a large black circle.

What's going on with this sign? My best guess is that it was originally a circle, and this got simplified into a pattern of wedges over time, but I have no idea how you would make a circle with a cuneiform stylus. (Bonus: does anyone have images of how it actually looks on clay?)

TL;DR: The sign ŠAR2 was originally a numeral sign meaning 3600 = 60 × 60. Like all early cuneiform numerals, it was made by pushing the tip of a round stylus into the clay. When these round styli gradually fell out of use during the Old Akkadian period, it turned into a square made of four diagonal wedges, effectively merging with the sign ḪI, as seen in this excerpt from Labat's catalogue of cuneiform signs[1] (with colored annotations by me): 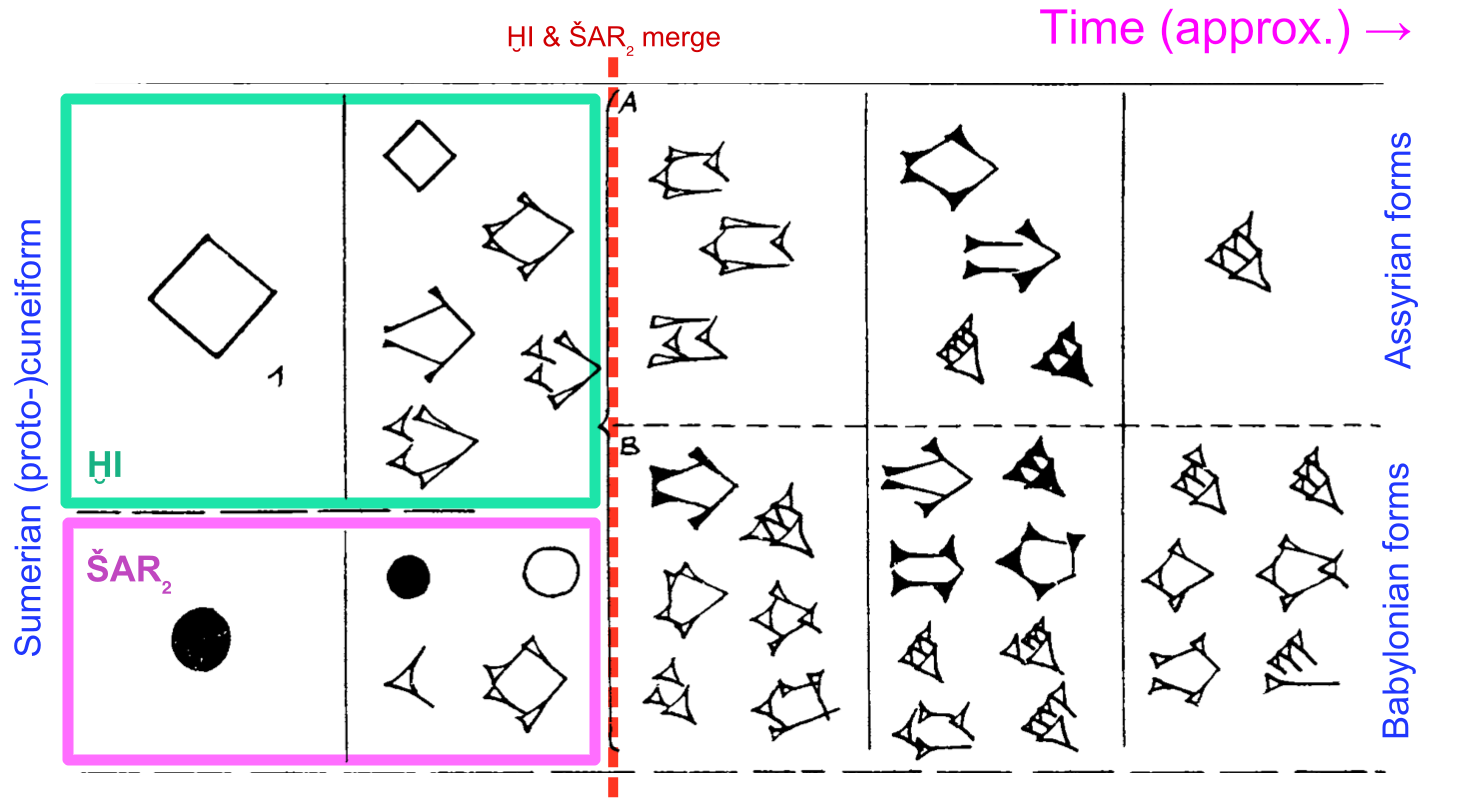 Anyway, to properly understand the origin and evolution of the ŠAR2 sign (and a number of other similar originally numeric signs such as DIŠ and U), one has to go back to the very beginning of the cuneiform writing system.

The earliest known proto-cuneiform tablets consist of numerical tallies made by pressing a round reed stylus into clay, either straight on (making a round mark) or at an angle (making an elongated "half-ellipse" mark) to represent different numbers (e.g. an elongated mark for 1, a round mark for 10). To represent larger numbers, similar marks could be made with a bigger stylus, and the marks could also be combined in various ways.

Apparently several different systems were in use, varying both regionally and also depending on the type of thing (discrete objects, liquid measures, dry measures, etc.) being counted, as illustrated below:

Illustration of two proto-cuneiform counting systems, denoted as system B and system C, taken from Friberg (2019)[2], showing multiples and fractions of a base capacity unit c.

Later on, as on the tablet shown below, line drawings representing the things being counted (as well as sometimes their source, recipient and/or purpose) began to be drawn next to the numerical marks using the tip of a sharpened stylus:

Notably, making all these different sized tally marks as well as the line drawings must have required the scribe to use at least two different styli, even if one assumes that the two opposite ends of the same stylus were used for different purposes. Presumably the inconvenience of switching between styli was balanced by both tradition and the convenience of being able to make each numerical sign (of which administrative tablets like this had plenty) with a single press of the stylus.

Later on, as the proto-cuneiform system evolved into true early cuneiform, scribes started simplifying the pictorial line drawings and composing them out of straight line segments made by pressing the edge of a sharpened stylus into the clay, causing the signs to take on more stylized shapes that would later gradually evolve into the completely abstract signs characteristic of later forms of cuneiform writing. But the special number signs, and the round styli used to make them, remained in use up to the Old Akkadian period.

As time went on, the number system simplified, as shown in the diagram below:

Illustration of the evolution of the cuneiform counting system S, also taken from Friberg (2019)[2]. The first line shows the early proto-cuneiform form of the system, the second line the Old Sumerian / Old Akkadian form (still using round numerals), the third like the Neo-Sumerian / Old Babylonian form (using cuneiform wedges, but still using a sign-value notation) and the last line showing the place-value form of the system using only combinations of the signs DIŠ and U.

The first change was that most of different proto-cuneiform counting system (perhaps better regarded as units of measurement) were dropped in favor of what's known as "system S". This was basically a sexagesimal (base 60) number system, but still using separate signs for the numbers 1, 10, 60, 600, 3600, etc., as well as for common fractions. And it still used the round numeral signs made with a separate (end of a) stylus.

The next step in the evolution of system S was that the convenience of using only one stylus won out and the round number signs were replaced by signs composed of the same kinds of cuneiform wedges as the rest of the writing system used.

The most common numerical signs (for 1 and 10) still retained the handy feature of being made with just one stylus press, with the sign DIŠ = 1 (originally a small vertical half-ellipse) evolving into a single vertical cuneiform wedge and the sign U = 10 (originally a small circular mark) into a single corner wedge ("Winkelhaken"). The sign GEŠ2 = 60, originally a bigger vertical half-ellipse, remained identical to DIŠ = 1 except bigger, being made by pressing the stylus deeper into the clay — thus paving the way both for the eventual evolution of base-60 place-value notation (see diagram below) as well as for enduring confusion on how to unambiguously write the number 60 in prose. The higher-valued signs, including ŠAR2 = 60×60, were drawn using multiple wedges, as were the traditional signs for the common fractions ⅓, ½, ⅔ and ⅚.

Finally, the sign-value system S was eventually supplanted (at least for proper mathematical purposes) by a true base-60 positional number system known as system Sp, where the signs for 1, 60, 3600, etc. became identical, being only differentiated by their position in the number (or in a column of aligned numbers) and the same happened to the signs for 10, 600, 36000 etc. While this made the system a lot more flexible and capable of representing arbitrary large (or small — the sign for 1 could also stand for 1/60, 1/3600, etc.) numbers, it also introduced a certain amount of ambiguity, since the system lacked a consistent way of marking zeros or decimal points. Still, in practice this system seems to have been more than serviceable, and remained in use with small variations for thousands of years.

However, the special signs for large numbers (and for common fractions) did not fall completely out of use. For one thing, they were convenient for representing round numbers in prose and in other contexts where the place-value system could be ambiguous. Also, by this time, many of the signs had acquired secondary uses. For example, besides denoting the specific number 3600, the sign ŠAR2 had come to be used as a generic sign for "a large number" and was even used as a logogram for the Akkadian word kiššatu(m) = "everything", "all", "totality", "the whole world", as well as in divine names such as dan-šar2 = Anšar (a Sumerian primeval deity, later synonymized with the Assyrian chief deity Aššur).

Quite a very precise question !
In later phases of Cuneiform, the sign HI and the sign SAR2 indeed tended to fuse into the same set of four slanted wedges.
As you rightly mention, SAR2 was originally a black circle, in the early phases.

21
Languages which changed their writing direction