What is meant by "s/he flies" in Plains Cree dictionary?

The VAI (animate intransitive verb) page doesn't have a description.

In English we have verbs "in the infinitive form" like "to fly". But his says "s/he flies". Does Plains Cree not have infinitive verbs? It states:

In actual fact, verbs not only convey actions (e.g. pimipahtā “run”) but also states (e.g. kāmwātan “it is calm”) and, in the case of Algonquian languages (which lack a distinct class of adjectives), verbs also attribute qualities (e.g. apisīsisiw “s/he is small”).

To me it feels like these "words" are really phrases or sentences. So I don't understand why they are included in a "dictionary". Can you please help me understand why?

Other examples I don't see why they are included in the dictionary:

And there doesn't appear to be a "to fly" at all. Why not?

In nêhiyawêwin (Plains Cree) and other languages in the family, the "words" are as you say, more like "phrases".

The concept of "is" doesn't exist in the same way in nêhiyawêwin, it's often encoded in the verb itself, and the language (along with many Indigenous languages) have been called "verb-based" as opposed to "noun-based". Being "verb-based" (if we can describe it this way), the concept of "is" can often combined with what would be considered the "adjective" to come up with what you will see in the dictionary:

(Note: that there aren't gendered pronouns in nêhiyawêwin, "s/he" really actually means "that one", however this is the definition you'll generally find in the dictionaries)

Further, verbs in the language will do what you expect, describe what the person is doing, or who they are interacting with:

To further complicate matters, there is an intersection of "transitive" verbs (involving more than one person/object) and a "gender" of nouns that have been (for better or worse) classified as "animacy". Generally speaking, "living things" can be called "animate" and "non-living things" can be called "inanimate" (though there are many exceptions here), and the breakdown ends up creating four different verb classifications:

Here's another view of the intersection of these concepts: 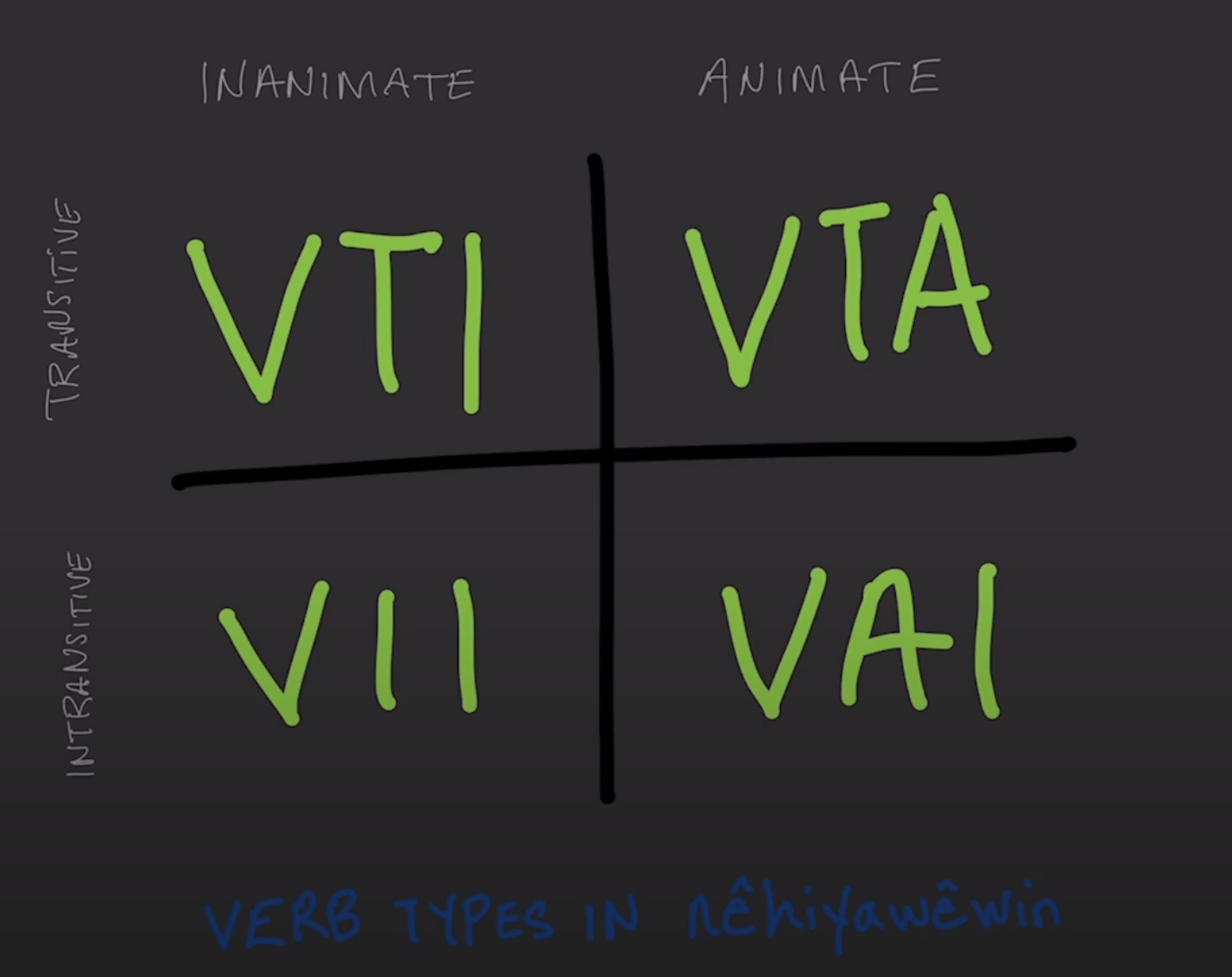 Here is an example of each:

Now these forms are only so useful, because you aren't always just talking about the 3rd-person, so in order to talk about yourself, you need to inflect the verb to mean "me", for example:

So. To answer your original question:

To me it feels like these "words" are really phrases or sentences. So I don't understand why they are included in a "dictionary". Can you please help me understand why?

They are really phrases, and the form that has been selected for the "lemma" (or "dictionary form") is generally the 3rd-person form, meaning the form you will generally see in the dictionary is usually "that one does XYZ", for consistency, and presumably also simplicity. In the case of transitive forms, you'll see the 3rd-person form again for VTI verbs, and the 3s -> 3' (third-person singular to fourth-person [or 'obviate']) form for VTAs. Further, verb inflections have have complex inflections and meaning, for instance:

Coming from nakiskamohtahêw [VTA] "s/he introduces s.o.", the above is possibly a poor choice for the lemma entry.

To also circle back to your earlier question:

Does Plains Cree not have infinitive verbs?

There is an infinitive inflection, again that could be specific to you or me (or anyone else) depending on the specific conjugation:

One of these (infinitive forms) potentially could have been selected for use in the dictionary, but ultimately the form that is used currently (3rd-person singular independent conjugation) is the one that offers the most consistent experience for learners when attempting to utilize a verb within the conjugation paradigms, which exist for each verb type.

For that VAI verb above (atoskêw "s/he works"), here is an example of the possible inflections, not including "tenses": 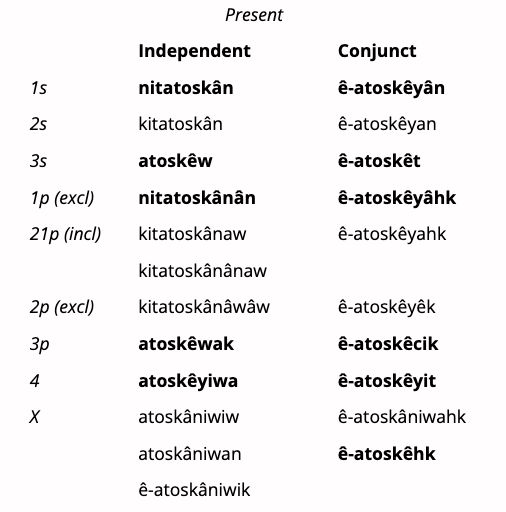 For VAI verbs, there are only a couple dozen inflections (before tenses) but getting into the VTA paradigms, there are several hundred possible inflections, further underscoring the need to have a consistent entry for the dictionary.

You can view these conjugations on the itwêwina dictionary being developed by the University of Alberta.

In Plains Cree, if I understand right, qualities are "verb-like", and there's no verb form that we would call an "infinitive". That's just how the language works; there's no better "why" than that.

As for the question asked in the title, "s/he flies" means that some animate referent flies. Cree only makes an animate versus inanimate distinction, and "s/he" is one way of neutralizing English "he" and "she".

As for the question of infinitives, the answer depends on exactly what you mean by "infinitive", but probably under most definitions of "infinitive", Cree doesn't have them. But that doesn't answer the question that you really seem to be asking, which is why this is the form used to present this particular verb. Cree is a highly inflected language where any root can have thousands (millions?) of specific rule-governed word forms, and you really don't want to list every single possible word of the language (ask a separate question if that is not obvious). So for any highly-inflected language, the question is, what is the best way to list a given lexical entry? It depends on why you are listing lexical items in the first place.

A very common reason is to assemble the information that is crucial to enable a reader to generate / interpret any morphological variant of that morpheme. Obviously you have to understand the grammar of the language in order to actually do this. One approach is to give an abstract underlying form, the product of a contemporary hi-tech theoretical analysis. The problems with that approach are (1) high-tech theoreticians disagree even with their earlier selves as to what the underlying form is and (2) the concept "underlying form" is too abstract a concept for untrained users. Regardless of your Anglocentric perspective on what counts as a "word", these are words in Cree, and words are things that people can handle. So from the user's perspective it is a highly functional way to convey information.

I don't mean that it is completely impossible to embed linguistic information in a linguistic theory and present it to non-linguists. Verbs in classical Arabic are lexicographically presented as consonantal roots that expand to certain specific forms (so that you know the vowels, and what happens to the glides). But this is not practical in Algonkian languages. If you want a "semantic" dictionary of a language (like Cree), you can learn the language and create one: most dictionaries are primarily organized around word forms, and secondarily meanings.

You might study the Giellatekno lexicon for North Saami. In their approach (hidden behind the scenes in the database), roots are indexed with an "analogy indicator" – for example

Their concern here is with form-generation. If you have a different purpose, you'd use a different data structure. If your question is what the traditional terminology of Algonkian means, you could read some traditional grammars such as Bloomfield's The Menomini language or Eastern Ojibwa.

Not the answer you're looking for? Browse other questions tagged verbs dictionary or ask your own question.

7
Sumerian cuneiform dictionary?
5
What's the largest dictionary in the world?
1
How Nesting Verbs Works (and if it is Even Possible)
0
What should go into a dictionary in heavily agglutinative languages?
4
How a learner of a polysynthetic language like Arapaho would use an electronic or printed dictionary?
21
What is the proper definition of a verb?
2
Concise IPA dictionary