Want to improve this question? Add details and clarify the problem by editing this post. 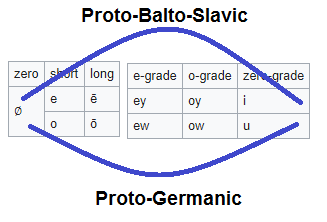 As three seconds of looking it up (probably in the same place you found those forms to begin with) shows:

So evidently the *i and *u are epenthetic and the result of the devocalisation of the vocalic resonants. That is to say, Proto-Indo-European *l̥ and *r̥ represent /l/ and /r/ functioning as vowels, which is something neither Proto-Germanic nor Proto-Balto-Slavic likes, so they convert them to consonants and add a vowel to avoid the loss of the syllable and further pronunciation difficulties.

"Zero-grade i" and "zero-grade u" aren't meaningful terminology. Your table shows the behaviour of an ablauting vowel and a following semivowel in Proto-Balto-Slavic; when the ablauting vowel is present, those semivowels exist as glides, and when it's not (i.e. when it's in the zero-grade), they turn into vowels. In this case the roots of these words are in the zero-grade, but they don't have following semivowels, so it's not relevant.

(There are other languages that deal with the *l̥ in *wĺ̥kʷos by vocalising the *w instead: Proto-Celtic *ulkos and Albanian ulk, for instance.)

Not the answer you're looking for? Browse other questions tagged proto-indo-european slavic-languages proto-germanic or ask your own question.