What do these diagrams of vowels actually represent?

I've heard many times that spoken language is subjected to variations and we never make the exact same sound when we speak, even for the same word. If that's the case, how can you be so exact about the placement of certain vowels in diagrams like these, especially when talking about certain languages like Russian and Swedish which have too many vowels in a specific area that makes it very crowded and it seems like maintaining a distinction is pretty much impossible.

I'm fully aware of the fact that in Swedish the primary distinction between some vowels phonemes is based on rounding, but there are still too many of them and not all can be distinguished primarily by rounding. Also, does the word primary here mean that they ARE in fact distinguished on other factors as well, which might include their positions in the vowel space, which would mean that native speakers do place them separately in their mouth when they make them? 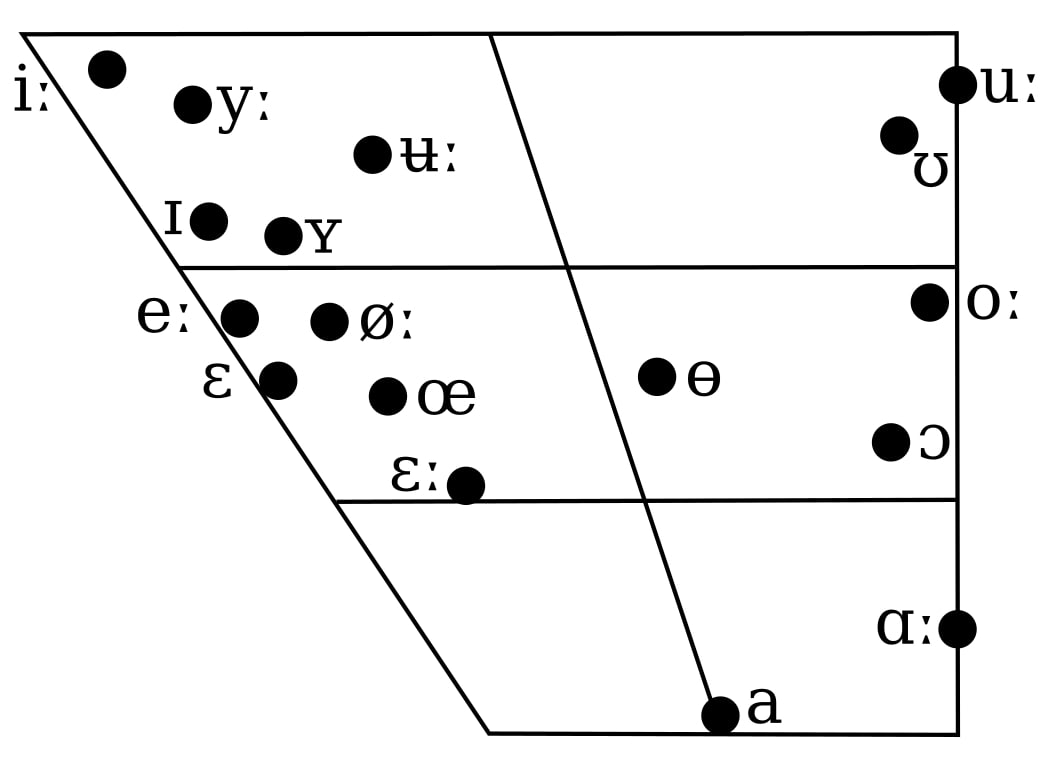 phonology phonetics vowels
Share
Improve this question
asked May 16, 2021 at 4:56

The "how" part is training on exemplars. First there needs to be some standard, and that was established by Daniel Jones with the cardinal vowel system. Essentially, Jones' students learned to produce the cardinal vowels, then taught their students. This provides reference points for a subset of the vowels in the IPA. The training tradition still exists in some institutions, and thanks to the miracle of the internet, one can find authoritative samples of the vowels (and consonants) performed by experts in the IPA, this chart from John Esling, and this chart with performances by Esling, House, Ladefoged and Wells (the Esling samples may be identical to his stand-alone collection). There are other such recordings, and classes that you can take.

These define the standard reference points for the IPA. If you hear Norwegian du you have a few choices as to which vowel it is closest to: credibly, [ʉ y Y] but not [u] or [æ]. If you listen to all of the reference samples, you will notice that the experts do not agree – this is a fundamental limit on the precision of the standard. Conventionally, "u" is assigned the value [ʉ] because (1) there is also [y] as in [dy], and (2) the vowel is auditorily closest to the standard [ʉ] for most expert performances. Each IPA symbol represents a range of values, and unfortunately ranges overlap a bit.

There is also a practice of micro-nudging vowel letters in the trapezoid, where the vowel [i] might be below the top line. This is the language-expert's judgment that the vowel is "a but lower", "a bit further back". Theoretically, this judgment can be aided by synthesizing vowels based on the formant values implied by this chart, and Keith Johnson did actually devise a "click on the chart" program which provided stimuli that aided people in making judgments as to where that vowel "is" (AFAIK it doesn't exist anymore for hardware reasons). One can generate comparative stimuli with Praat, which can give you a basis for saying "further back".

This is all about the phonetic values of vowels, and phonetic values are generally taken to be the primary determinant of vowel classification. However, phonological patterns also determine how people transcribe vowels. This is true to the point that people often disregard the phonetic facts in order to present a phonemic transcription, rather than a phonetic transcription. In Tigrinya, for example, the phoneme /ʌ/ is pronounced [ʌ ɛ æ a ɵ ɔ] depending on context, but this is (almost) never indicated in transcriptions, because it is rule-governed and people typically transcribe only contrastive details.

In other words, transcriptions and vowel charts are usually not claims about pronunciation, they are claims about the phonological system, but those claim are influenced by ideas of what the phonetics is. A couple of examples of phonetic vagarity are that the phoneme /e/ in Norwegian is usually a diphthong on the order of [ɛə], and the phonetics vs. phonology of Russian ы is a matter of extreme controversy (IMO [ɨ] is phonetically wrong but might be okay phonologically).

A chart like this might also represent mean formant values from a corpus in the language. Your particular chart looks more like a plot of computed formants, not a chart of auditory space.

In theory, that kind of chart represents an average position of the acoustic parameters of the first formant (F1) frequency, and second formant (F2) frequency (which don't actually correspond in a straightforward manner to tongue position).

If you were graphing actual data points, you would use a scatter plot. "The phonetics of schwa vowels" by Edward Flemming has some examples.

Not the answer you're looking for? Browse other questions tagged phonology phonetics vowels or ask your own question.

6
On the phonetics of Russian ы
11
Why don't minimal pairs like "быть" and "бить" prove that /ɨ/ and /i/ are separate phonemes in Russian?
2
Are there any minimal pairs between [ɨ] and [i] in Russian phonology?

5
Do some dialects of English have a liquid vowels, such as /ɹ/ and /ɫ/?
0
Why isn't "N" considered a partial vowel
5
Does the primary distinction of retroflex consonants lie in their effect on surrounding phonemes?
17
Why vowels sound different from each other
4
Why are vowels said to be segments produced with no obstruction whatsoever?
5
Why were the formants of high and back vowels difficult to obtain? And why not anymore?
0
Epenthesis using SPE-notation
1
How many vowels does spoken Hindustani have and what are the proper values of /e/ and /o/?
0
Confusion about compression vs. protrusion in rounded vowels