The classification of morphemes

I have seen conflicting charts and models of morphemes. Here's how I understand it. 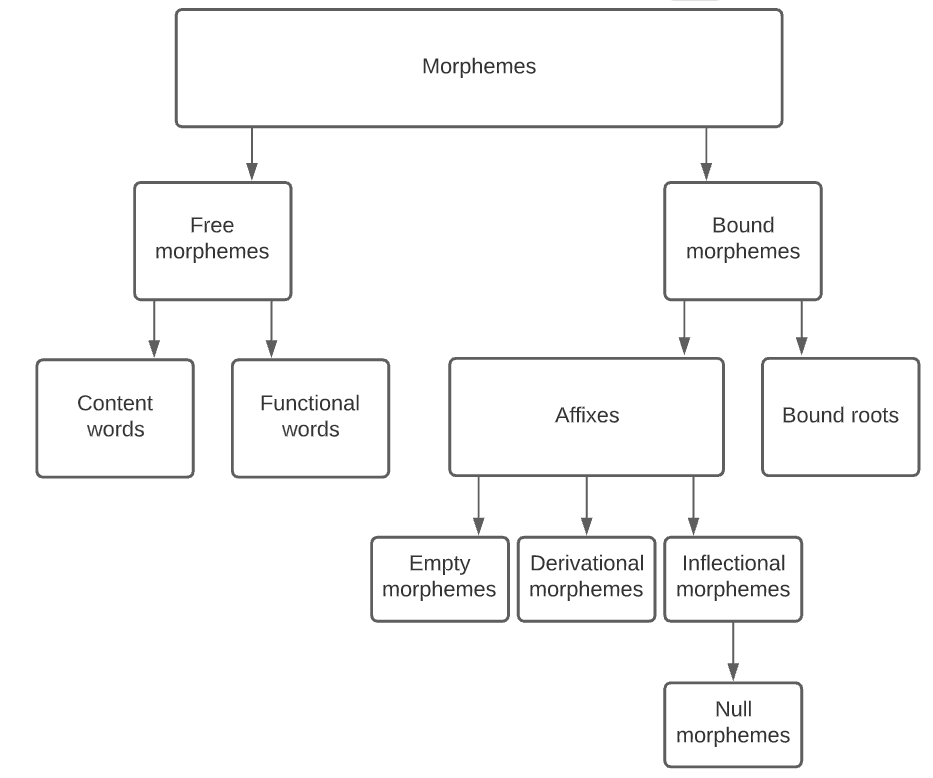 Free morphemes do not require other morphemes to make sense. That means that all free morphemes are words. Content words have meaning, but no function beyond that meaning: examples include dog, house and car.

The category of functional words is comprised of all conjunctions, prepositions, determiners, auxiliary verbs, modals, qualifiers, question words and pronouns, who serve a function instead of possessing a concrete meaning. Examples include the, over and her. Content words is an open class of words, meaning it receives additions more commonly. Functional words is a closed class of words, meaning it rarely receives additions.

Affixes are additions to a word, either at the front (prefix), end (suffix), in the middle (infix), around (circumfix), at multiple places (transfix). These additions may take the form of one or multiple phoneme changes (simulfix), the full or partial, identical or similar, duplication of a root/stem/word (duplifix) or the removal of a part of the word (disfix).

The inflectional affixes modify the grammatical properties of the word, such as a verb's tense, aspect, person, mood or number, or a noun/adjective/pronoun's number, gender or case. According to Wikipedia, affixes that change the class of a word (comprised of nominal, verbal, adjectival and adverbial affixes) are a part of the derivational affixes. This doesn't quite make sense to me, as I thought a word's class was a grammatical property.

Null morphemes are morphemes without phonemic content. In English, there is no affix for words that are singular. No visible or audible affix, that is. There has been conceptualized an affix, or a null morpheme. For example, dogs can be divided up into dog + s, the s being the inflectional morpheme that changes the root's number. However, dog could be divided into dog + /Ø/, the /Ø/ being an unpronounced and unwritten morpheme that may only exist in the average person's subconscious conceptualization of words and the linguistically educated person's subconscious and conscious conceptualization of words. 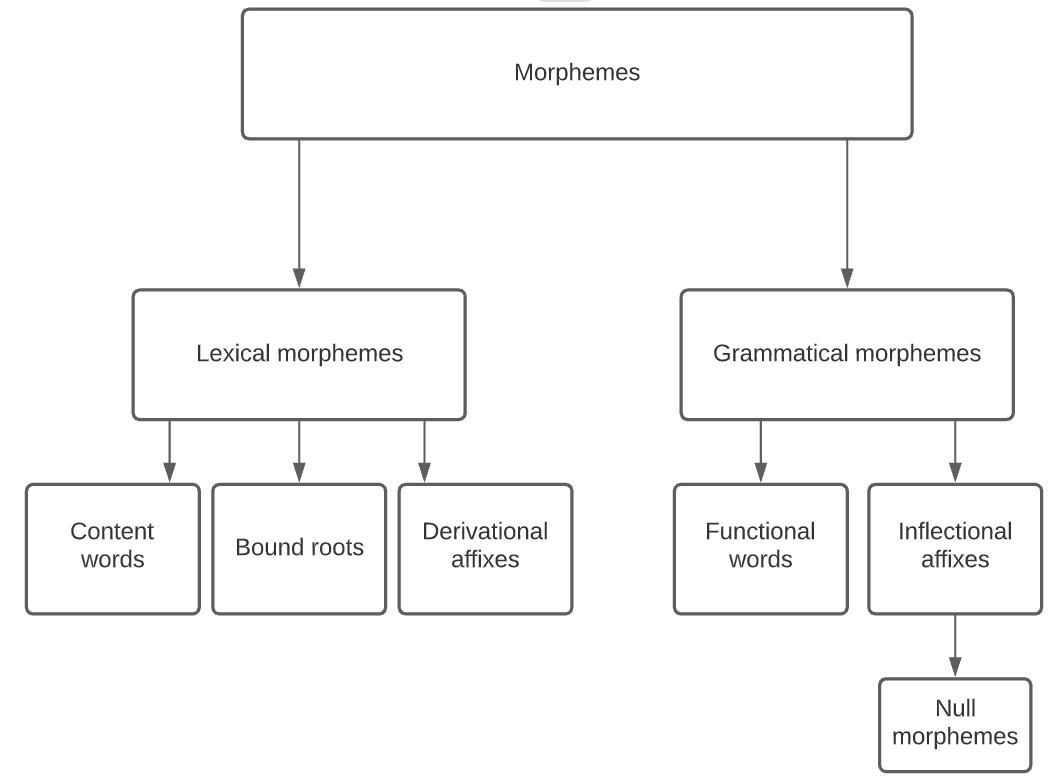 The category of empty morphemes doesn't really have a place on this diagram because they neither have meaning nor a grammatical purpose. If they should exist on the first diagram is debatable in the first place.

So, the questions I am left with are these: Are the two featured categorizations correct? Why aren't class-changing affixes regarded as inflectional affixes? What is really the fundamental difference between a bound root and an affix? They are both units of meaning that require other morphemes to make sense; why is one considered a root and the other not? Why are "empty morphemes" a thing when they don't comply with the definition of morphemes?

• Why aren't class-changing affixes regarded as inflectional affixes?
Here I will speak about the state of things in the languages that have both word classes and inflections, like the languages of Europe. Each kind of inflection works on words belonging to a certain class of words. For example, in Latin, nouns inflect for case, and verbs inflect for person and tense. But words don't inflect for word class (a.k.a. part of speech), a words belongs to a word class, words are classified into word classes according to the kinds of inflection they have. — Inflected for case? You're a nominal. Inflected for tense? A verb. If by attaching a morpheme a word changes its class, it becomes another word, not another form of the same word. And making one word from another is called derivation, the resulting word is derivative. That's why class-changing affixes are not regarded as inflectional affixes, they work in the realm of derivation.

• What is really the fundamental difference between a bound root and an affix? They are both units of meaning that require other morphemes to make sense; why is one considered a root and the other not?
Not all the languages are like English or other Germanic languages in which content words are very often just single free morphemes, like in “Mother loves her son” — each of the 4 words here is a free morpheme. If you take, say, Ukrainian, this sentence will also have 4 words, but 8 morphemes — each word being a root morpheme + inflectional morpheme:

Of these 4 roots, only син ‘son’ can be used as a free root, without any other morphemes (or call it with a zero morpheme), the remaining 3 root are never used without inflectional morphemes, they cannot just add a zero morpheme. They are bound roots. They have lexical meaning, they can be inflected, each of them belongs to its own word class, they are roots, they are not affixes, they do not modify anything, it is they that are modified. Latin has lots of such roots, e.g. terr- ‘land’ is a bound root, used only with an affix (terra, terrae, terram, terrīs, terrārum, etc.), never with a zero one. Also lup- ‘wolf’, hom- ‘human’, etc., hundreds of them.

• Why are "empty morphemes" a thing when they don't comply with the definition of morphemes?
You mention this definition of morphemes: “a morpheme is the smallest meaningful unit of language”. It follows from your definition (and I agree) that morphemes work on the plane of meaning, meanings are constructed from morphemes. It is this point that completely rules out any possibility for those “empty morphemes” to be mere phonemes, since phonemes have no meaning of their own, they just distinguish one morpheme from another, they are features of morphemes, they have to do with form, not with the meaning. Phonemes are units of the phonological level, that is the level of pure form devoid of any meaning, phonemes are empty shells and details to make shells, or even the theoretical constructs of empty shells. Generally speaking, on each language level, the units of this level consist of sets of units from one level lower: a phrase consists of 1 or more words, a word consists of 1 or more morphemes, a morpheme consists of 1 or more phonemes. A phrase cannot consist of 2 words and a morpheme. If this phrase is relevant, then it's not just a ‘morpheme’, it's a one-morpheme word, thus the phrase in fact contains 3 words. The same with those “empty morphemes”. If the word ‘speedometer’ has the morphemes ‘speed’, ‘meter’, and something else in between 'em, this something else in between 'em can be only another morpheme, or else ‘speedometer’ is not a word!
Alright, but what about meaningful? Morphemes are to be meaningful! So, in fact, they are. No lexical meaning, no inflectional meaning, they are just mortar morphemes, they serve to connect another morphemes into a single word so that it would be distinguished from a free word combination. Isn't it enough? Besides, given you're ready to accept the existence of zero morphemes devoid of form, it shouldn't be too hard for you to accept the empty morphemes, too, since zero really matters and although it means ‘nothing’, still it does mean it. Just imagine all those millions of trees made each year into the blank empty paper in those spaces between words! Brrr!

Not the answer you're looking for? Browse other questions tagged terminology roots affixes morphemes grammatical-category or ask your own question.

11
Agglutinative vs. Analytic. What's the difference?
7
Across agglutinative languages are there tendencies for morphemes to occur in certain orders?
2
Are all complex words polymorphemic?
5
Are all morphemes meaningful?
1
Morphology - Detailed description
4
difference between the root, lemma and stem for a derived word
2
Why are pronouns considered grammatical (functional) morphemes?
3
Criteria for judging allomorphs and different morphemes?