Is there an approach to quantification theory that construes quantifiers as subset creators?

In formal semantics, the theory of generalized quantifiers analyzes quantifiers (e.g. all, some, no, most, few, etc.) in terms of sets to sets. The meaning of the quantifier some, for instance, is understood in terms of two sets, say, set F and set G; some, then, denotes the intersection of F and G (F ⋂ G), as expressed in the copular sentence Some Fs are G. This meaning is sometimes visualized using Venn diagrams. One circle, labeled as set F, is drawn in such a manner that it overlaps with another circle, labeled set G. The precise area where the two circles overlap is the intersection of F and G and is then understood as representing the meaning of the quantifier some. 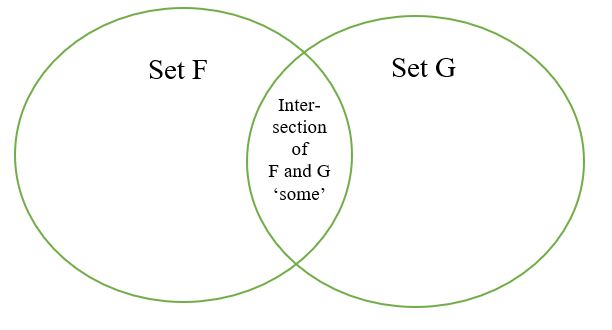 My question concerns the potential of an alternative approach to the meaning of quantifiers. Instead of sets to sets, one views quantifiers as subset creators, that is, in terms of subsets of sets. One would still access set theory to interpret the meaning of quantifiers, but instead of acknowledging two distinct and independent sets that do or do not overlap to a greater or lesser extent, one acknowledges that the one set is a subset of the other. Thus if we consider the meaning of Some men in the sentence Some men are happy, we understand it in terms of the following Venn diagram: 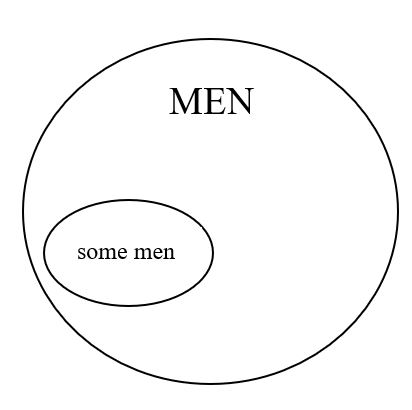 Has this sort of approach to the meaning of quantifiers already been developed by anyone? If not, why not? Is there a reason why such an approach would not work? Any and all commentary and guidance in this area will be much appreciated.

I should perhaps first clarify how the traditional theory works:

Quantifiers with a slot for a subject restriction, like some, every, do not denote sets of sets. They denote binary relations between sets: [[some]] = the set of all pairs of sets F, G which overlap.

The quantified sentence is then formed by plugging in the verb phrase for the second argument G: [[some men are mortal]] = true iff the set of mortals is among the set of sets which intersect with the set of men, i.e., true iff men and mortals intersect, and false otherwise.

In the computation of [[some men]], there is no explicit reference to the set of mortals. [[some men]] is simply the set of all sets which intersect with the men. It does not have to be established at this point which of these sets coincides with what is comprised by being mortal, or any predicate for that matter. The sets are anonymous. [[some men]] consists of any conceivable collection of individuals so long as it has at least one element with the men in common; these arbitrary sets exist independently of linguistic expressions that describe them, many of them may not even fit a single concise description at all. It is only when combining the quantified subject with the verb phrase in question that [[mortal]] has to be evaluated, in order to establish whether what it extends to coincides with one of those sets that intersect with the set of men, i.e., whether what man comprises and what mortal comprises have at least one element in common. But before putting together the subject and the verb phrase, [[mortal]] is nowhere needed in the definition of [[some men]].

If I am understanding you correctly, you are proposing that quantified determiner phrases like some men do not denote sets of sets, but sets of individuals, with the requirement that this set always be a subset of the subject noun phrase. Then a quantifier must be not a relation between sets (something where you put in two sets and get out yes or no), but a function from sets to sets (something where you put in a set and get out another set): some would take a set and return some subset of it.

What would this function look like? Which subset should be assigned to the set of men such that it fits the nature of "some"? And how should it combine with the verb phrase predicate? Which relation does the set of mortals need to have with which particular subset of the men?

If a subject with the quantifier incorporated denotes a set and a verb phrase denotes another set, what is the additional rule that relates them? With the traditional theory of generalized quantifiers, a quantifier combines with two predicates and gives you 'yes' or 'no', depending on whether or not the two sets stand in the specified relation, so that the sentence can be composed to have a truth value. If your quantifier no longer does the job of comparing two sets, and instead gives you some subset of the subject noun phrase and leaves you with two sets (the quantified subject and the verb phrase), what other hidden syntactic element makes sure that these two sets combine to something which can be true or false, and how?

And how would you go about reasonably defining a quantifier like no (as in No man is mortal) while demanding that no man be a subset of the set of men, when the meaning of no is precisely that whatever is predicated in the verb phrase does not share any elements with the set of men?

I see no easy way to define the standard quantifiers and the rules for their composition in this way.

I am also not convinced that such an assignment from sets to subsets would be more intuitive than the conventional theory of generalized quantifiers.

I agree that the conception of a set of sets, as the denotation for a half-baked sentence like some men with the subject noun phrase already plugged in but the verb phrase out of the picture, is hard to make sense of intuitively. Simply put, some men describes the properties which apply to some men; assuming that a property corresponds to a set of individuals, a quantified determiner phrase should thus be a set of such sets of individuals.

Yes, it's been developed in the early 1980s, read Jerry Hobbs' paper "An Improper Treatment of Quantification in Ordinary English". To combine dependency syntax with formal semantics you could use linear logic, it's been used in unification grammars so it'll work equally well for DG.

Not the answer you're looking for? Browse other questions tagged semantics formal-semantics quanfiers or ask your own question.

0
Establishing the most common "semantic units" in a corpus
1
Predicate: traditional vs. modern view / semantics vs. syntax
3
Are the following two versions of a meaning postulate of Montague Grammar equivalent?
3
Representing constructive and non-constructive claims in formal semantics
0
Is it possible that whole relative clause refers/describes one word/phrase in the main clause (without anaphora)?
1
Definite descriptions and essentially indistinguishable participants
3
Does simple type theory distinguish between those common nouns that are used as arguments and those that are used as predicates?