In what sense are terms for "white/shining" and for "swamp/marsh" "semantically connected" in many languages?

Although a closed question, reading THIS we find a link to Wictionary with the text:

How is that connection possible? On what rationale is it based?

The semantic connection between "white" and "swamp, mud" is not obvious, but has been attested in many languages. Beside the mentioned Lithuanian, also in e.g., Old Polish biel (“mud, swamp”) (< *bělь, from *bělъ (“white”)). This is probably due to the widespread presence of the marsh grass called cottongrass (genus Eriophorum), whose the white fluffy seed heads are white, or the color of the dried clay taking light hue, depending on soil.

And shows this picture as... proof: 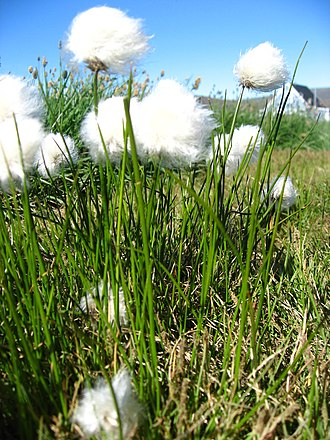 It is: "Eriophorum scheuchzeri, with white fluffy seed heads, is found throughout the temperate Northern Hemisphere in acid bog habitats."

It seems that it's the use (practical/empirical closeness) that imposes this connection, not any pre-concived rule, although the botanical explanation looks odd.

The second part of the question was posted by me as an answer to an initial form of the question asking simply "why" the terms for white and shining are considered connected. Now I see that the answer was that they were "semantically connected" .

But why? Isn't a such explanation circular, and if not: why?

What does it mean that a semantic connection that is not obvious is nevertheless attested?

I think there is indeed such a connection, but having nothing to do with cottongrass or other fluffy white plants.

According to Schuessler's ABC Etymological Dictionary of Old Chinese, the character/morpheme 澤/泽/zé meant something like "unfold/draw out" and combined with other affixes produced words meaning "unloose"; "let go"; "explain"; "interpret." There is also the graphically, and presumably etymologically, related character/morpheme 燡/yì, which means "bright."

A reasonably explanation for these facts is that the concept of sheen or luster gives a semantic connection to all these meanings. The concept of wet or wetlands could explain the meaning "marsh." Wet foliage covered in dew has a sheen that resembles the clear luster of certain jewels that lends them a certain shininess. Opening something up also lets light in and "clears" it up.

These Chinese etymons do not, however, include the meaning "white." There is the character/morpheme 白, which is the normal word for "white," but is also a morpheme that can add the meaning "understand," "explain"; "clear." Wiktionary puts these under one etymon, but the ABC Etymological Dictionary of Old Chinese puts the meaning "understand" under a different phonetic reconstruction and a different etymon borrowed from Austroasiatic, citing as an example Vietnamese biẽt.

Based on all these relationships, you can posit meanings linked on something like the following lines:

It's most probably a complete chance coincidence. Words meaning "marsh" are probably substratic in light of Basque (correction not balta => sorry the right word is) baltsa "marsh, pond, also mud". The other words meaning "white" have nothing to do here.

simply put, clean water is bright and translucent as supposed to dark and opaque. Fertile meadows near clean water may be thought of as healthy, or literally soaked, soggy. I refer to German saftig "juicy", said occasionally of grass as well as green color.

Further tangential evidence is provided by etymologies of green, yellow and (baby) blue, turquoise, bleen etc. corroborating the basic facts of color perception that those are light colors, typologically emerging as distinct from brownish shades which include most often red, ochre and the like, which may be triviallly associated with barren dirt, wood, not to mention stone gray lacking in color.

Not the answer you're looking for? Browse other questions tagged etymology proto-indo-european indo-european cognates or ask your own question.

0
Why does Latin, Turkish, and Albanian share common words?

10
What are the Proto-Germanic words for sea, lake and a couple of others?
26
What are the historical origins of terms for north, south, east and west?
3
In PIE are words for two and for hate connected?
9
Why are there words meaning both "breath" and "life/spirit" in so many languages?
10
Any reasons for unexplained centumization in Balto-Slavic?