Intuitively, my answer in this case is “Yes, it does”. But now consider the next two sentences:

(3) Frank called the woman in his class.

In this case, intuition fails me. I am unsure whether the truth of sentence (3) entails the truth of sentence (4). Sentence (4) seems vague in such a way that does not allow one to reach a conclusion about potential entailment, one way or the other. Note that on Friday in (1) is an adjunct on the verb arrived, whereas in his class in (3) is an adjunct on the noun woman.

So, how should we understand the influence of adjuncts on entailment patterns?

Considering that adjuncts are considered pieces of sentences that add additional information about time, place, manner etc. without changing the core meaning of the sentence, yes, it makes sense that a sentence with an adjunct would entail the sentence without the adjunct.

This is especially visible in event semantics, where the semantic content of an adjunct is typically conjoined (and-ed) with the phrase it combines with: 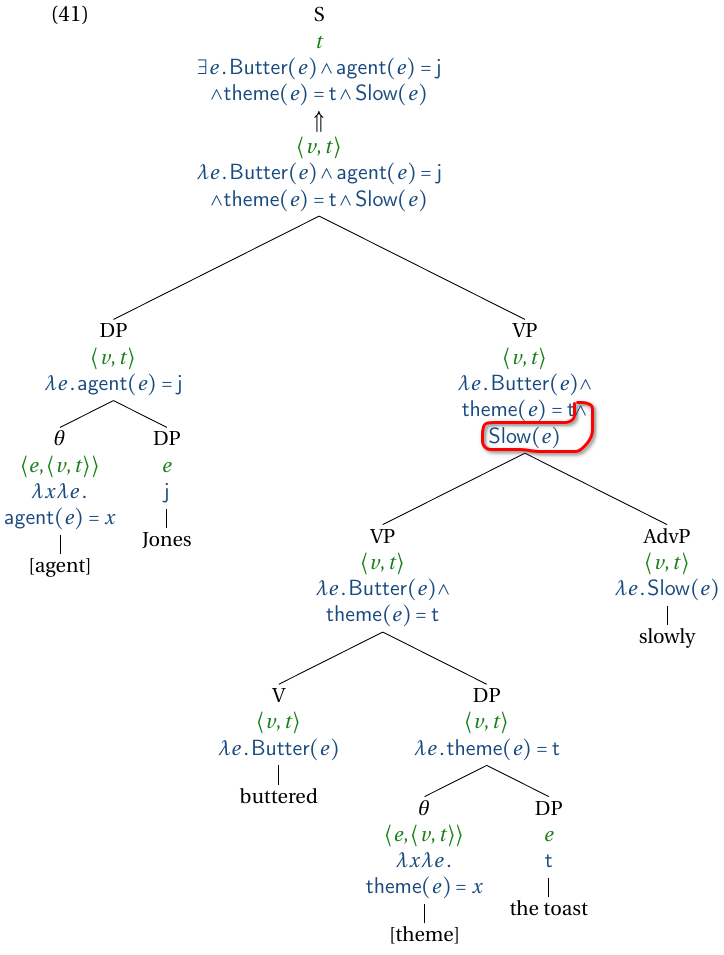 The semantics of the VP together with the adjunct reads "is an event which is a buttering event and whose theme is the toast and which is a slow event".

It would work the same way with PP adjuncts, e.g.

The last sentence one could perhaps analyze in more detail and say that "the woman in his class" denotes the unique individual such that they is a woman and in class with Frank, and "the woman" without the adjunct may fail to denote since there may be no unique woman, in which case the sentence would have no or a false truth value and the entailment fails.

Not the answer you're looking for? Browse other questions tagged syntax semantics entailment or ask your own question.