In X bar theory, is the first auxiliary the head of an interrogative clause and the remainder the complement?

In X bar theory, the first auxiliary is the head of a declarative clause:

(1) She will have finished it by tomorrow.

Here, subject she is a specifier, and verb phrase have finished it by tomorrow is the complement of the head will.

The first auxiliary remains the head of a corresponding interrogative clause through head movement:

(2) Will she have finished it by tomorrow?

Here, is the remainder she have finished it by tomorrow the complement of the head will?

The simple answer to the question is as follows: Yes, the complement of an auxiliary verb in a traditional X-bar-theoretic approach does view the entire string following the inverted auxiliary as the complement of the auxiliary. That this is so can be seen by examining an example. The next tree is taken from Haegeman (1991: 109). Haegeman’s book was written at a point in time when the influence of X-bar Theory was perhaps at its greatest. 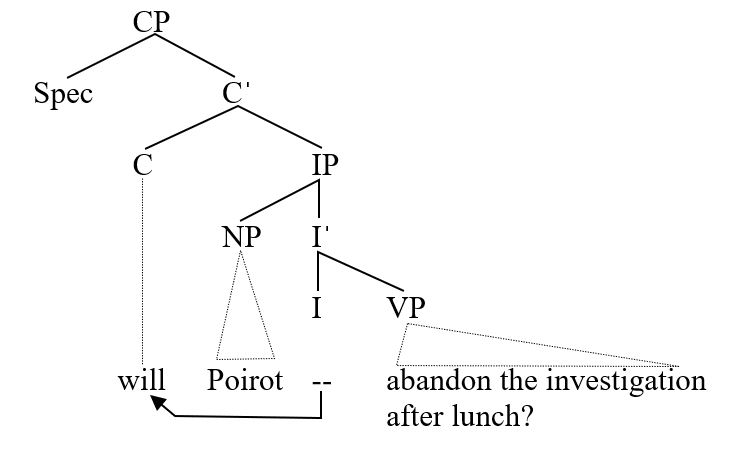 This tree shows what is known as “head-to-head movement”. The auxiliary will moves out of the I head position and into the C head position. The entire IP is then the complement of the C head.

Taking Haegeman’s example as guidance, the X-bar-theoretic analysis of the sentence in the question would be as follows: 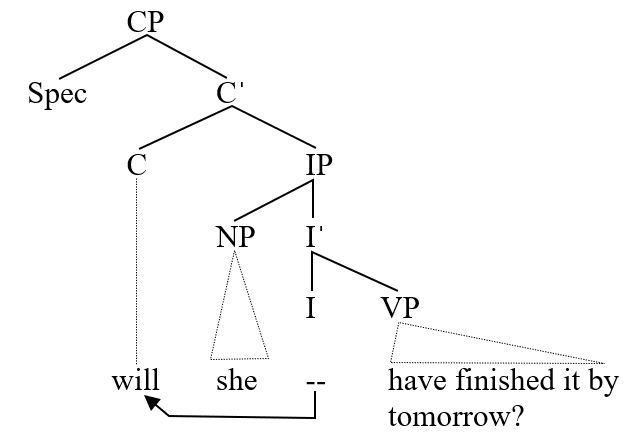 The same sort of movement occurs, although some sort of category adjustment might be necessary to accommodate the presence of the additional auxiliary, i.e. of have.

One thing to be aware of in all this is that X-bar Theory as understood here is something that has influenced the development of syntactic theory a lot, but many syntacticians today do not assume X-bar structures. Most modern approaches in the Chomskyan tradition assume some sort of reduced version of the traditional X-bar schema.

Consider further in this regard that what appears to be a straightforward and simple question about X-bar Theory, i.e. the current question, has gone unanswered in this forum for a few days. The fact that a bounty has been necessary to receive a response suggests to me that the sway of X-bar Theory in the field of syntax is by now quite minor.

Not the answer you're looking for? Browse other questions tagged x-bar-theory auxiliary-verbs modal-verbs complement inversion or ask your own question.

2
Do all frameworks of syntax view the string following an inverted auxiliary verb in English as the complement of the auxiliary?

1
Can the first auxiliary verb be the specifier of a VP in the X-Bar theory?
5
Tree diagrams in CGEL
4
Is "of the kitten" in "the paw of the kitten" a complement to the NP or an adjunct to the DP?
7
I have my hair cut - "my hair" a Direct Object?
6
To what extent was Chomsky influenced by Tesnière?
1
In generative grammar, is the first auxiliary always the head of an interrogative clause?
2
Do all frameworks of syntax view the string following an inverted auxiliary verb in English as the complement of the auxiliary?