Why treat 'verbal group', not 'verb phrase', as a constituent of a clause in Systemic Functional Grammar?

SFC (Halliday, etc.) doesn't treat as a constituent of a clause a verb phrase (VP), which combines with an noun phrase (NP) to form a clause in a canonical English construction. Instead, SFC uses the concept of a verbal group (VG), which comprises verbs only (auxiliary and lexical verbs) and doesn't include any complement or adjunct, and treats the VG as a constituent of a clause.

In the clause, for example,

someone’s been eating my porridge

the VG is has been eating.

If not, what's the motivation for SFG's treatment of the VG as a constituent of a clause?

Although I do not have much direct exposure to SFG, I believe the primary motivation for doing it that way in SFG is a desire to render periphrastic verb combinations structurally similar to their unary counterparts. Consider that in French

in English. Thus, the periphrastic two-verb combination will be in English corresponds to the one verb sera in French. If one views will be as a constituent as described in the question, then there is compatibility across the languages in the syntax insofar as the verbs that match each other in meaning also match each other in the syntax as constituents. In this manner, the syntax of synthetic and analytic languages become more similar, the relevant units of meaning corresponding to constituents regardless of the language at hand.

The question also inquires about whether the SFG approach in this area could be rendered in terms of the dependencies of DG. The answer is clearly No! There is no way to produce a dependency analysis that would render such verb combinations as complete subtrees. Consider the next two competing analyses of the sentence Frank has been working hard in this regard. 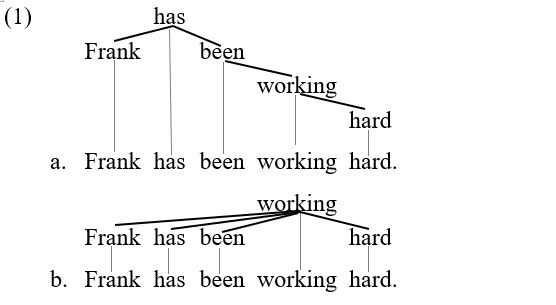 The analysis in (1a) is the one I prefer and is the dominant one in DG reaching back about 40 years. The one in (1b) is prominent now in certain circles, especially for the people who assume the annotation scheme of the Universal Dependencies (UD) project. There is no other option that could claim any plausibility. On both analyses here, the verb string has been working fails to qualify as a complete subtree (due in part to the presence of hard as a dependent of working). It is therefore indeed the case that the SFG approach simply cannot be rendered in terms of the dependencies of DG.

The SFG analysis is not plausible in my view, mainly because there is little evidence suggesting that periphrastic verb combinations such as has been working in (1) should be construed as constituents. Such combinations fail most tests for constituency. Note, though, that on the analysis in (1a), the periphrastic verb combination has been working does qualify as a concrete unit of dependency syntax, namely as a catena.

Not the answer you're looking for? Browse other questions tagged systemic-functional constituents verb-phrase or ask your own question.