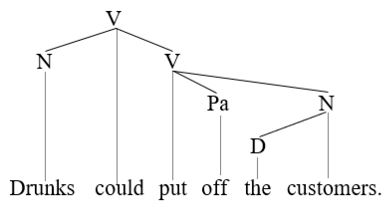 This is a Dependency syntax tree from an official website. As can be seen from this pic, "off" is deemed as a complete subtree. But when we use constituency tests to verify it, it does not perform as a constituent actually. I thought that "customer" was supposed to be a dependent of "off". Can somebody help me understand the place off "off" in this pic. Is it similar to the determiners in dependency trees?

This gets into the issue of phrasal verbs.

However, sometimes we see a similar structure where the preposition and the following phrase aren't a constituent together:

The second type are called phrasal verbs, and that's what "put off" is here:

"Off" seems more closely bound to "put" than "the customers" here:

It's the customers that drunks could put off.

So it makes sense to say that "off" and "the customers" both depend on "put" (in different ways).

As a side note, this phrasal vs non-phrasal distinction can in some cases distinguish homophones in English:

It's one of the interesting quirks of English syntax.

4
Syntax: How can this tree be built?
6
Infinitive verbs in syntax tree
2
Dependency tree with "seem"
0
Help with an ambiguous English syntax tree (studying for a final)
3
What should the root of a syntax tree be labelled with?
1
Description of various placements of PPs in a syntax tree
1
Syntax tree for "the Middle East"
4
Are individual words really constituents?