How to treat adverbial phrases in X-bar theory

My question is about how to represent so-called adverbial phrases like "last night" or "all day". My confusion arises because there seems to be a consensus that these phrases are adverbial or simply adverbs, yet from a lexical standpoint, "last night" and "all day" are noun phrases.

It's fine to say in general, "These are adverbs/abverbial phrases! These are NPs acting adverbially!" -- but how can this be represented in a tree, and how does this interact with phrase structure rules, which probably do not allow AdvP --> NP?

How can I represent an adverb phrase that looks exactly like a noun phrase?

Below are three trees which I hope clarify my question; one showing a simple sentence with a regular adverb, and the other two showing the phrase "all day" in the same adverb position. I guess my question is, it it okay to draw trees like this, and essentially just pretend that "all day", "last night" etc. are one-word adverbs, and not multiple-word noun phrases? 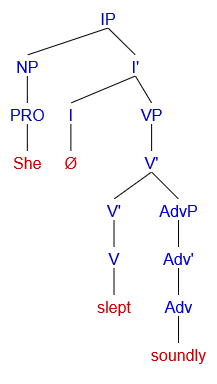 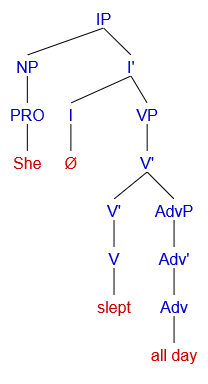 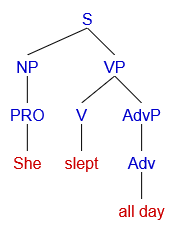 Thank you for your consideration.

'[I]n the many places where I was guilty of the reprehensible and shockingly common confusion of the notions of "adverb" and "adverbial"; these defects, for which I hang my head in shame, I have corrected wherever I have found them.'

In the quote above, McCawley draws attention to two problems endemic in the grammatical literature: the widespread confusion between adverbs, adverb phrases and adverbials, and the loose writing that contributes to this. The Original Poster is an unwitting victim of these scourges. Further below, I argue that the term adverbial should be avoided at all costs.

As the Original Poster correctly assumes, the string all day is an NP. It should be labelled as such. This is its status in terms of its phrasal category.

In terms of ɢʀᴀᴍᴍᴀᴛɪᴄᴀʟ ʀᴇʟᴀᴛɪᴏɴs, such as Subject, Object, Head and so forth, all day is an Adjunct or Adverbial within the example sentence. When people refer to Adverbials as "adverbs" or "adverb phrases", this is just loose talk. We should avoid doing this ourselves and such labelling should never occur in serious analyses or in x-bar trees. As happens in many other traditions, grammatical relations do not make it onto syntax trees in x-bar theory in any case, and so the OP need not worry too much about the 'adverbial' label here.

In the free, extra section below, I argue that the term Adverbial, partly because of its association with adverbs and adverb phrases, is one that should be avoided at all costs. It is self-plagiarised from a post I wrote on EL&U+.

The term adverbial is a bane to the principled study of language. It is the epitome of the worst problem in the field of language study - a problem which should by now be regarded as a schoolkid problem - the problem of not understanding the difference between syntactic functions (or grammatical relations) and parts of speech or types of phrase.

For a few principled writers who use the term, an adverbial is a phrase which functions as an Adjunct (read Modifier) in a clause. The important point there is that adverbial in any principled description of language is a type of syntactic function (or grammatical relation). It is not a type of phrase or a type of word.

Syntactic functions (also described as grammatical relations) are the different jobs that chunks of words can do in a sentence or phrase. So for example the chunk of words the elephant you met yesterday, which happens to be a noun phrase, has the function of Subject in :

It has the function of Complement of a preposition in:

It has the function of Object in:

It has the function of Predicative Complement in:

It has the function of Determiner in a noun phrase in:

So as can be seen from the examples above, a type of phrase, in this case a noun phrase, can have many different types of function. It's also important to realise that the same syntactic function can be realised by many different types of phrase. So, for instance, Predicative Complements can be noun phrases, adjective phrases or preposition phrases:

In the examples above we see a noun phrase, an adjective phrase and a preposition phrase functioning as Predicative Complement of the verb BE.

So the important question here is: what's an Adjunct? In terms of clause structure, an Adjunct is an extra phrase in the clause. It is not a Subject or a Complement of the verb. A Complement of a verb is a phrase which fills a special slot set up by the verb. For example, the verb PUT has two special slots for certain types of phrase. Apart from a Subject slot, it has a slot for the thing that is being moved and it has a slot for the destination of that thing. If one of these slots isn't filled the sentence will be ungrammatical or seem a bit odd:

In the example above the pen and on the table are two separate Complements of the verb.

In contrast with Complements, Adjuncts in clause structure don't fill a special slot set up by the verb. They are syntactically and semantically extra elements. Sentences are well formed with or without Adjuncts. Adjuncts have no special relationship with the verb. In the following example at four o'clock is an Adjunct:

Very importantly for the discussion here, Adjuncts can take many different forms. For example, they can be adverb phrases, preposition phrases or noun phrases:

In the three examples above, for people who use the term in a principled way, the phrases very well, on Saturdays and every day are Adverbials. They are phrases which have a special function in the clause structure. The term adverbial is derived from the old-fashioned (and not very acutely observant) idea that different parts of speech are related to specific different syntactic functions or grammatical relations. Adverbs have traditionally been regarded as having the special function of modifying verbs or verb phrases. The term adverbial, therefore, is used to describe phrases which have the function of modifying verbs, verb phrases or clauses. Remember though that there are many different types of phrase that can modify verb phrases, not only adverbs. The term adverbial then, when used in this way, means something like having an adverbish type of syntactic function. It does not mean that the phrase is an adverb or anything like that.

Of course, even that adverbish type of function idea is misleading. It gives us the idea that Adjuncts are usually adverbs - and they aren't.

Preposition phrases can have many different types of function. For example they can be Subjects:

They can be Predicative Complements:

They can be Locative Complements:

They can be Modifiers in a noun phrase:

There are many other types of function that preposition phrases can have. You need to be very careful therefore when you read passages which use the term adverbial. If the writers are thoughtful, careful and principled writers they will use the term to describe a particular type of function, namely Adjunct in clause structure. On the other hand they may be talking about a type of phrase, namely a preposition phrase, as opposed to a noun phrase, for example. However, if you're very unlucky they will be mixing and matching the phrase type and the function without realising it. Nearly every writer who uses the term adverbial to mean a preposition phrase will be guilty of this crime.

The worst problem here is that the people who do this do not understand what they are doing. They will quite happily screw up the line between functions and types of phrase within the same paragraph or even within the same sentence without the slightest idea what they're doing. Perhaps even more gravely than this, the use of the term adverbial is so unevenly used and so confused in terms of whether it is a function or a phrase category, that many writers even substitute the word adverb for the term adverbial. This means that you will see many intelligent people saying ridiculous things such as:

What to do about this

Ideally we can avoid actually using the term adverbial ever at all. But if we do have to use it, because our peers do for example, we need to be careful that we use it to refer to a function in clause structure. If we absolutely have to use it to refer to a type of phrase (specifically a preposition phrase) we need to make it crystal clear to our readers or listeners that we are using it in this way. Most importantly we need to make sure that when we use it, we ourselves know exactly what we are referring to and that we don't slip between functions and phrasal categories like a hormonally confused teenager.

Not the answer you're looking for? Browse other questions tagged syntax syntax-trees x-bar-theory phrases adjuncts or ask your own question.

1
Phrases and clauses used as an adverb, and hence don't take a preposition
1
The function of prepositional phrases
4
Is the adverbial phrase and adverb phrase identical?
4
How do noun-noun compounds fit into a noun phrase in syntax?
0
Does an adjunct really "modify" something?
1
Analysis of adverbial phrases composed of NOUN and NOUN
0
Is there any case in English where a noun phrase is not the subject of a sentence, or a complement of a verb, or the object of a preposition?
4
When / why can adjective phrases come after nouns in English?