How to write the Greek letter beta and the German letter eszett so that they look different enough?

I've seen variants of beta with the final arc ending on the vertical line and ones which have a break there. In eszett the break seems to be always present. Is that the easiest distinction to learn to apply consistently in handwriting? And if so, is it allowable (I know it's not hard science, but I'd like to know if, despite not widespread, it's attested in some fonts and people's handwriting and wouldn't raise many eyebrows) to cross the vertical line with the arc in beta?

There are at least 2 features of eszett that differ it from beta:

Also, in regular type as opposed to italics, eszett usually sits on the line while beta has a tail hanging below the line, but in many fonts and in handwriting eszett has the tail, too, so this difference is not very reliable.

When German text contains Greek letters, sometimes a special 6-like shape of beta ϐ (shape 2 in the image) is used to tell beta from eszet.

Having eszett with the curved conjunction and with no tail below the line will suffice to tell it from beta with angular conjunction and the tail, not to say about having beta of shape 2.

As for the crossing or touching the bar, that is just individual, like flourishes, there can hardly be any tradition about it. 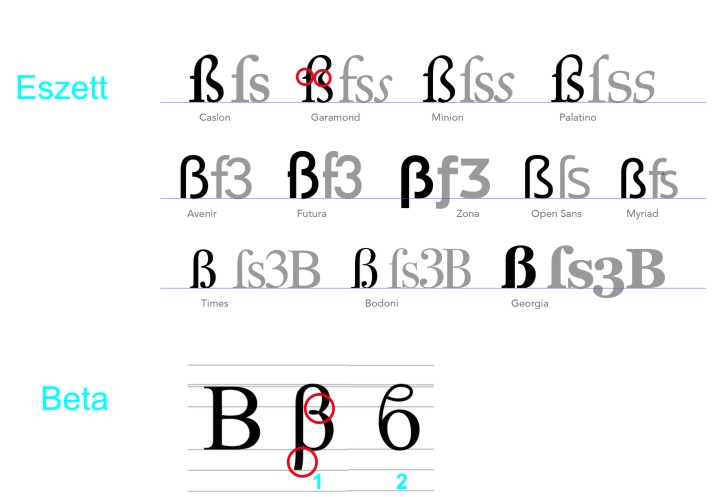 Not the answer you're looking for? Browse other questions tagged greek written-language german writing or ask your own question.

11
Are there languages where a change of character casing can lead to a different meaning of a word?
0
What is the difference in usage of the word "root" in PIE and its daughter languages?
0
Boustrophedon-like writing system with single character orientation