When / why can adjective phrases come after nouns in English?

When and why can adjective phrases come after nouns in English, if at all?

So, firstly: I am not talking about special usages like poetry or drama etc. where people may say things like "The night dark and stormy", but standard normal English (whatever that is).

I will use an example: "The bread available in the bakery looks delicious". This is a pretty normal English sentence, right?

(1) *the fluffy in the center bread

(2) the bread fluffy in the center

(3) *the proud of his children father

(4) the father proud of his children

(6) the people slow to move

While there are certainly exceptions of various sorts, the tendency itself is clear; adjectives with post-dependents usually follow the nouns they modify.

There is a principle of syntactic organization that motivates this behavior. Center-embedded structures are more difficult to process than consistently ascending or consistently descending structures. In other words, elbows in the sentence structure are avoided due to the increased processing load that they incur. The next dependency trees illustrate the presence and absence of such an elbow: 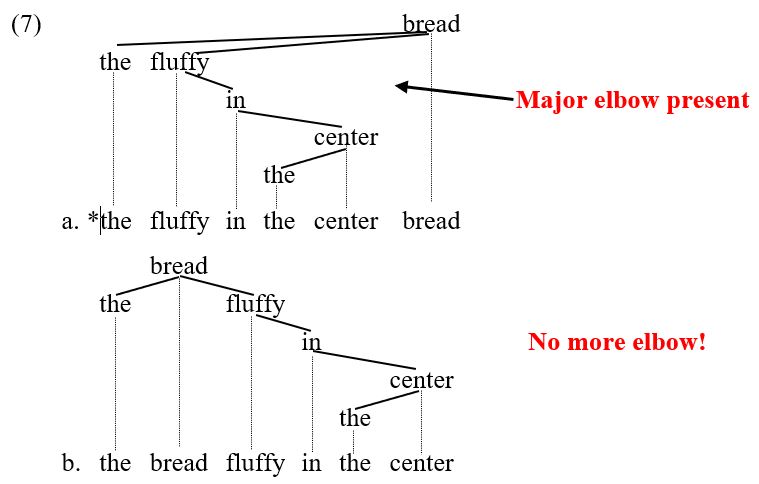 The principle of syntactic organization here is similar to the one that is responsible for rendering the following well-known instance of extreme center-embedding incomprehensible:

There are three or four major elbows present such that the syntactic structure extends mostly straight down. Such structures burden the human processor because of the inability to attach the words to the preceding structure as the sentence is produced and processed incrementally left to right. Immediately after dog is uttered, there are three unattached strings that must be maintained in short term memory at the same time: the rat, the cat, and the dog. Short-term memory apparently cannot manage this extreme load; processing breaks down entirely.

The relevant principle, then, is one that prevents center-embedding within noun phrases; it prevents the elbows from occurring that would render the noun phrases difficult to process.

Concerning the potential of ellipsis occurring, whereby often that is would be elided, such ellipsis may be difficult to motivate, for I am aware of no concrete facts that demonstrate the necessity of assuming ellipsis in such cases. The explanation given here would no longer be as insightful if ellipsis were assumed.

Finally, there are a couple of publications that go into this matter in more detail. I would be happy to share them with anyone who might be interested. You can contact me at tjo3ya@yahoo.com.

Not the answer you're looking for? Browse other questions tagged syntax english phrase-structure or ask your own question.

4
Term for the modified part of a prepositional complement
4
Can predicate adjectives take more modifiers than attributive adjectives in English? Across languages?
0
Help with an ambiguous English syntax tree (studying for a final)
1
Is there a term for syntactically and semantically linked modifying phrases?
0
Can adjuncts modify nouns?
0
When are prepositional phrases sibling to leaf nodes?
0
In syntax trees, why aren't single-word phrases reduced to that word?