Why we do not usually say "who did eat the apples" while "What did she eat" is perfect to use? [closed]

Ask Question
Asked 1 month ago
Active 1 month ago
Viewed 187 times
4
Closed. This question is off-topic. It is not currently accepting answers.

I don't know how much background in syntax you (or later readers) have, so I'm going to start with some basics (the complementizer layer, do-support, and object Wh-questions) before going into subject Wh-questions. Also, fair warning: syntax is not really my field, so things may be incomplete or incorrect, and anyone is invited to add or correct things.

The complementizer layer for yes/no questions

A sentence like You have seen Louis is analyzed with have in T(ense) and you moved from Spec,VP to Spec,TP, the default for subjects: 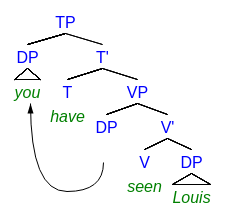 To account for the word order in the corresponding yes-no question, Have you seen Louis?, it is argued that have moves from T to a higher layer C: 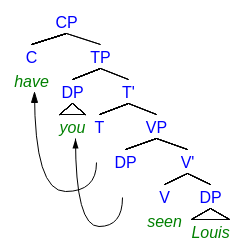 The reason behind this is that the C head has a [+Q] ("question") feature, which needs to be phonologically realized, i.e. it must contain something / cannot be null. Support for this comes from languages like Irish, which have an overt [+Q] complementizer (rather than T-to-C movement), Ar:

Further support comes from the fact that T-to-C is blocked when there is an overt complementizer, which is the case in embedded questions in English:

This poses a problem for sentences without auxiliary verb. The T head cannot move into C to give it phonological content, because it is null itself! As a last resort, a dummy do is inserted in T so that it can move to C: 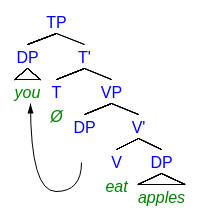 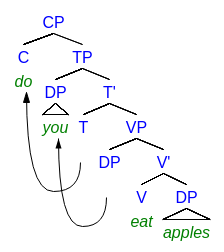 We now come to Wh-questions. We first need to look at questions where the Wh-element is the object. In this case, the object moves from its position in the VP layer to Spec,CP: 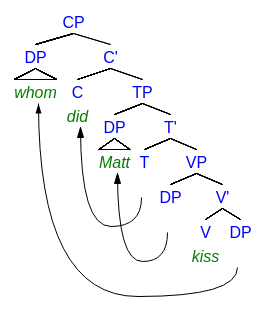 Note that do-support is still needed because whom cannot check [+Q].

(Example (4c) is possible when did is focused, but this is not a case of do-support because it is not required for [+Q] feature checking. It also occurs in Mary did buy the book!)

Why this happens is a bit of an open question, so good job on noticing the asymmetry.

Below are two possible solutions. There may be more, this is not really my field.

Pesetsky & Torrego (2001) argue that in main interrogative clauses, C bears an uninterpretable T feature uT. This means that something must be done to delete this feature. This is done by moving T to C. This is as before, but the terminology has been updated: we now talk about a uT feature that must be deleted instead of a [+Q] feature that must be checked.

Next, they propose that nominative DPs have a uT feature on the D head. This is the key proposal of their paper.

Within this framework, when a feature is deleted it remains somehow available, and it can itself delete features of the same type. So once the subject has moved into Spec,TP, it bears a deleted feature uT. By moving it further into Spec,CP, it can delete uT on C. When this is done, there is no need any more to also move T to C.

A question that may arise is: why in this situation must Spec,TP move to Spec,CP to delete uT on C; why can T not move to C instead? This would give Did who buy the book?, which is clearly ungrammatical. The answer here is twofold. First, Spec,TP really must move to Spec,CP because we still have the [+Wh] feature to check (or, rather, the uWh feature to delete). Second, by assumption, we only allow as many movements as are necessary to delete all uninterpretable features. After Wh-movement there is no uT feature left on C, so there is no need for T-to-C.

Of course one needs to explain why a nominative DP has a uT feature. Pesetsky and Torrego argue that this is not entirely unexpected because the reverse is true: T holds uD features like person and number for which it needs a subject DP.

Adger (2003, §9.3–4) gives a slightly different account for do-support, from which the lack of do-support in subject Wh-questions follows.

In his theory, T has a uninterpreted uclause-type feature that can be deleted by C[+Q]. This explains T-to-C movement in yes/no questions and object Wh-questions. As above, the requirement of T-to-C leads to do-support.

In subject Wh-questions, there is at some point a [+Wh] DP in Spec,TP. Adger suggests that the [+Wh] feature in this position deletes uclause-type on T. Afterwards, the subject goes on to Spec,CP to delete uWh over there.

Not the answer you're looking for? Browse other questions tagged syntax english wh-words or ask your own question.

4
Why is there no Subject-Auxilliary inversion in Subject questions?

4
Semantic logic of the word "both" in English - different from "and"?
26
Why did English lose declensions while German retained them?
2
Logic disambiguation in composed sentences with negative predicates and "or" conjunction
1
Why is it that the wh-word as a subject in the spec position cannot raise over an auxiliary verb like 'did'?
1
"To whom" in pied-piped infinitive relative clauses
0
Errors in my linguistics textbook
1
Simple Way to Determine if IPA Words Rhyme (English)