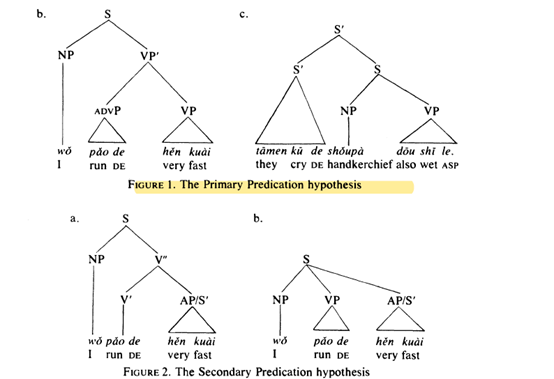 Anyway, he thinks there is a pro dropped in the embedded clause of (1). The predicate logic is shown below,

In (1), can “ta” be a binder of pro and also be a bindee of Zhangsan? Or it can be analyzed that pro is bound by Zhangsan and ta is also bound by Zhangsan. Here comes up another question, can a binder bind two bindees? I am not sure about the theory itself. So I am wondering if you know anything of it? Does English have this similar phoenonemon? The pro is in third predicate and the secondary predicate of the embedded clause, so which one is its binder?

I guess for English, it is not that complex since the reflexive can not be subject because of the morphology. "John knows he is full" and "John knows he has done it." The pronoun can corefer in both sentences. But in Chinese, if we use "zuo de dui", it is very likely to corefer while if there is no secondary predicate in embedded clause, it is marginal.

Browse other questions tagged syntax pronouns binding-theory or ask your own question.

6
Is the commutative CFG in the mathematical linguistics literature?
3
Are there other languages where pronouns behave like they do in Japanese, Korean, and Ryukyuan?
5
Is there any fusional language where pronouns and nouns share the same declension?
2
Nouns and Interrogative Complements
1
Is a sentence, composed of mainclause and subclause, represented by one or two syntax-trees?
2
Interrogatives and Copulas in Malay
3
Do nonfinite (adverbial) adjunct clauses have to be controlled?
9
Can one sentence have two or multiple possible phrase structure grammars? And what is this called?