What percentage of verbs in English take both a direct and an indirect object?

I am assuming that the number of transitive verbs that take both a direct and indirect object in English is a subset of those that just take just a direct object. Does anyone know how much smaller? How does this compare with other languages (e.g., German, Spanish, Russian)? Are there databases that can be used to explore this further?

As John Lawler notes in his comment, the big problem is defining the class of verbs you mean. Typically, we use "give" as an example of a verb that can have both an indirect and direct object: you can say "I gave Bob a cake". You can also say "I gave a cake to Bob": does that version count as an example of IO+DO? Let's say "no" (if you say "yes" then the answer probably has to be "pretty much all of them"). An Indirect object is an "object-like NP" that doesn't have a preposition. So we also have "I sent Bob a letter" which has two bare O-like nominals.

We also have "I baked Bob a cake", which we could derive from "I baked a cake for Bob". Now we can start looking for verbs that we can do "for" people, and see to what extend we can shift "V NP1 for NP2" to "V NP2 NP1", i.e. "dug Bob a hole", "skinned Bob a vole", "bought Bob a pole", and also try more examples of the analogous shift with "to", like "threw Bob a rope", "showed Bob the dope".

So a paraphrase of the question could be: which verbs engage in the V NP prep-NP ~ V NP NP alternation? For example, *"introduced Bob the pope", *"lobbied Bob his vote". As far as I can tell, "underneath" can never enter into that relation (*"I found the table the book" meaning "I found the book underneath the table"). It's not always or obviously always prepositional phrases, though, for example "They elected Bob mayor" matches "They elected Bob to be(come) mayor" or "They elected Bob as mayor", without movement or a second PP (unless you think of "as mayor" as a PP). Of course nobody would say that "I hammered the metal flat" has an IO and a DO, because "flat" is an adjective, not an NP.

In Bantu languages, the general answer is "everything", because there are valence-increasing suffixes that allow all forts of thematic roles to be integrated as bare NPs.

I am not a linguist by trade, so I don't know if I should even attempt to answer this, but here it goes because curiosity is killing this cat. In an attempt to answer my own question, I simply took the first most frequent 25 verbs in English and then compared their transitivity to a randomized selection of the most frequent 1,000. I did this simply because I was interested in how they compared. 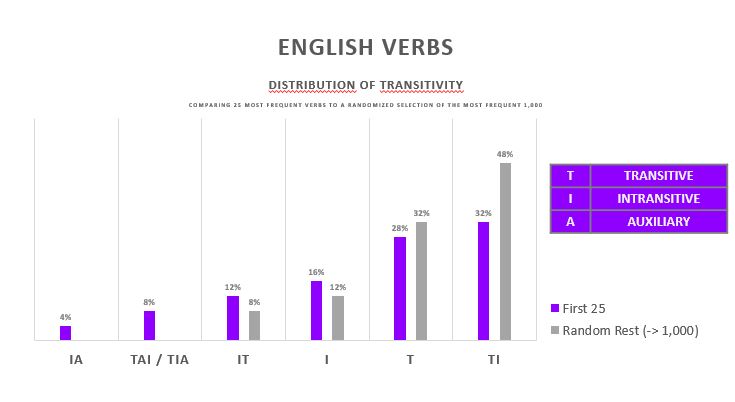 So, after doing that, I attempted to do the same thing with German verbs. As with the English, the first most frequent 25 German verbs were from a list of infinitives. That may be the most consistent aspect of the methodology.

But the methodology for the collection of German words is contaminated with flaws as well because I also did not use the same lists for the first most frequent 25 and the most frequent 1,000. In addition to that, the English list did not appear to show any past tense forms, but it did have conjugated present tense forms. This is not true for the German which appeared to contain not only all conjugations, but all tenses as well. Nevertheless, perhaps some of you can draw some conclusions out of these charts just the same. (Or, perhaps this poor answer will inspire someone to contribute a better one!) The German distributions are below: 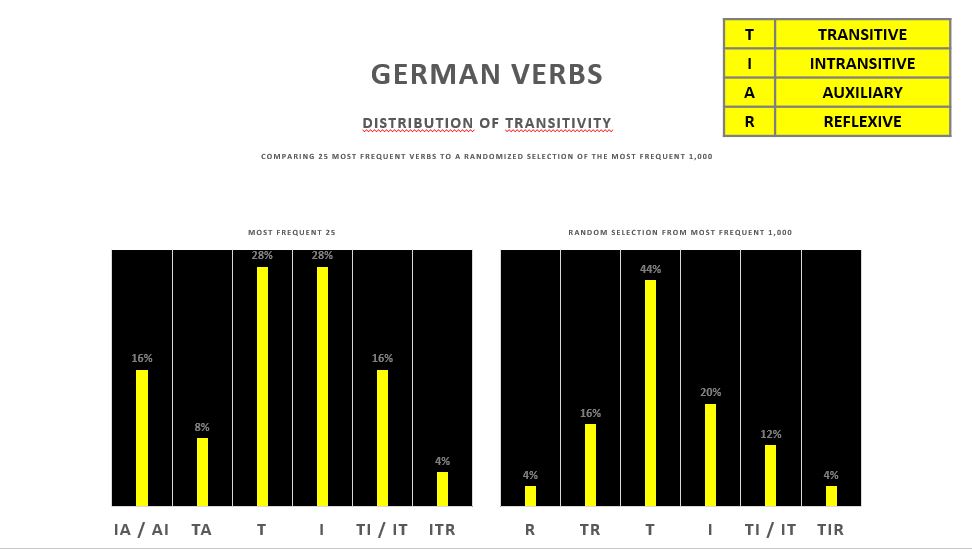 Due to the lack of rigor in the methodology and my lack of experience with linguistics, I won't draw too many conclusions from these charts, but what I didn't know before I began this attempt to answer my question is just how many verbs in English aren't just either exclusively transitive or exclusively intransitive. Many verbs can play different roles along the transitivity spectrum depending on context. Even so, it does appear that this is less of a tendency with German verbs. Of particular note is the larger percentage of exclusively transitive and intransitive German verbs compared to those for English. (44% vs. 32% for transitive and 20% vs. 12% for intransitive.) Perhaps this is common among languages with case systems. Perhaps in languages without case systems, verbs become more flexible in usage which affects their transitivity as well.

For the record, I used WordReference.com to assign transitivity for both the English verbs and the German verbs.

*Note: I realize that this answer morphed into content regarding transitivity rather than what percentage of verbs take both a direct and an indirect object, so let me close by saying that when I looked at the randomly selected transitive verbs that were included in the tabulations for this answer and determined which ones took both a direct and indirect object, I came to this estimate: 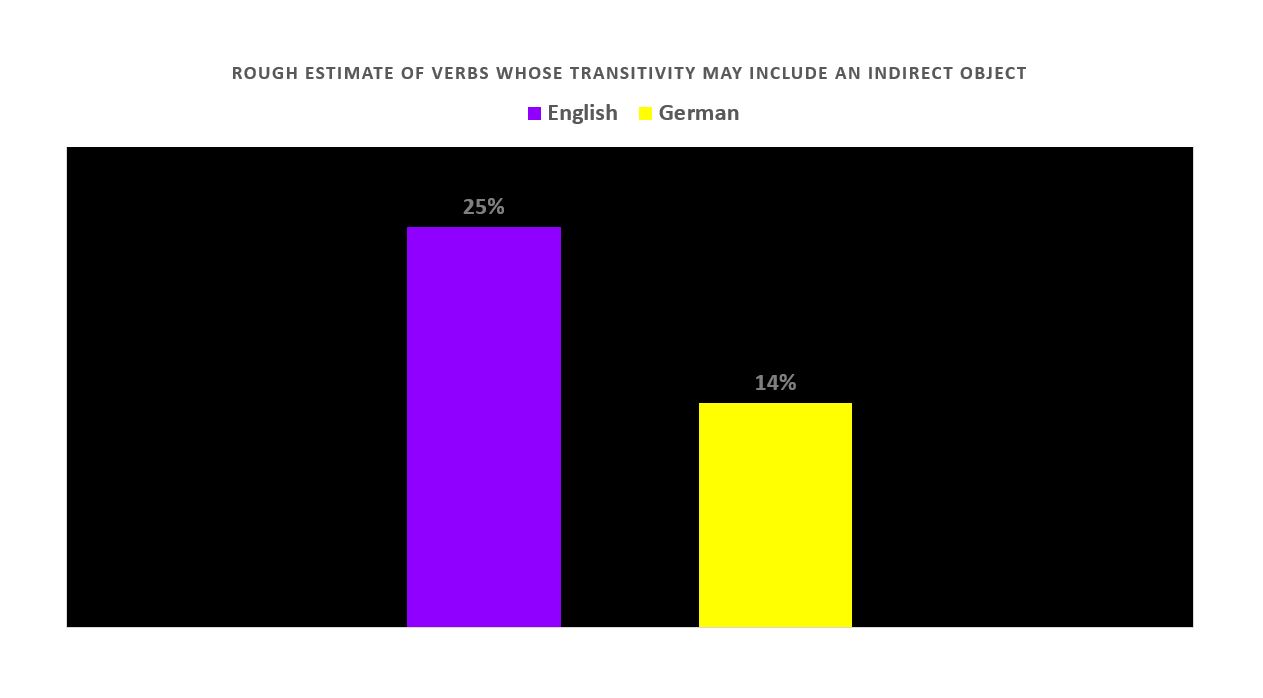 Granted, the numbers are really, really small, and the methodology was a bit shoddy, so these estimates are a bit of a leap. In fact, if this were an academic paper, I would never settle for such limitations, but as it is, especially due to a lack of experience and linguistic toolsets, I'm content to leave it at this for now.

3
What are intransitive verbs with dative complement called?
3
Intransitive verbs that take Indirect objects
2
Can a control verb simultaneously be a raising verb?
8
Do languages with cases frequently have verbs which use particular cases for their objects?
13
Is there a name for the type of word that the word, “scarecrow,” is? (a transitive verb conjoined with its object)