Why are affix hopping and head movement considered as distinct operations?

Affix hopping is a morphological operation by which an unattached affix in the T position is lowered onto a verb. This attachment is done by the "Phonetic Form component" (the posited component in the mind that transforms the inputs it receives from the syntactic component into phonetic spell-outs). For example:

The boy kicks the ball.

The underlying syntax tree for this sentence can be represented as: 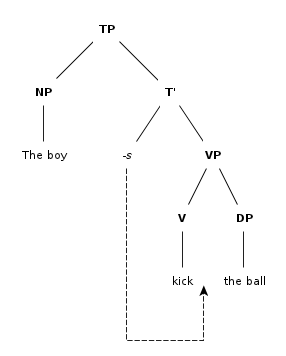 Here, the suffix -s (that indicates third person, singular, present tense) has been taken from its original position and then attached to the end of the verb, producing the form kicks.

Head movement is another operation, by which the head of a phrase is moved (in fact, copied) from its original position to another one. This is a syntactic operation. An example of head moving for a question in English:

Will you marry me?

which can be syntactically represented as: 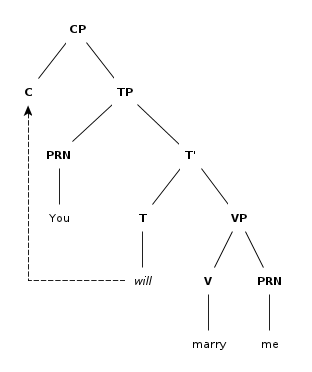 In this case, the auxiliary will has been moved from its original position to become attached to the null complementizer that marks a question.

Both operations involve moving a head from one position to another. But affix hopping is assumed to occur at a different level (or different "mind component") than head movement. What is the fundamental difference that makes linguists classify these two apparently similar kinds of movements as two very distinct operations?

There are a couple of reasons that syntacticians make this distinction:

As to the first, in a language like French (which has obligatory V -> T head movement), adverbs can separate the (main) verb from its object:

In English (no V -> T movement), the facts are exactly the reverse:

The second point has to do with the fact that Lowering cannot jump across an intervening projection, whereas Head Movement can1. So in a structure like the following, we predict that T cannot lower onto V, because of the intervening Neg. This is the motivation for do-support – do is inserted to "support" the features in T (which would otherwise be flagged ungrammatical by the Stray Affix Filter, which says basically that you cannot pronounce a bound morpheme in isolation). 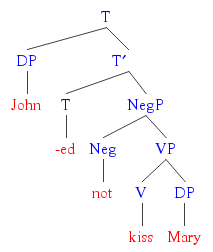 Other languages which lack head movement have different strategies for avoiding this clash. Mandarin, for example, which lacks verb movement to C, has a non-affixal question complementizer ma.

Analyses which merely say "and then it moves in the phonology!" are punting the question of what happens in Lowering derivations. If you are curious about how to say something substantive about Lowering/Affix Hopping in the phonology, this 2001 paper by Embick and Noyer (pdf link) is a recent-ish attempt to construct a theory of post-syntactic movement. (It also has several examples of post-syntactic movement other than the standard English verb-inflection one.)

(1): Many syntacticians would like to say that head movement in fact cannot skip intervening heads, and must stop at every one along the trail from source to destination. But this isn't agreed on by everyone; "long head movement" is the name that putative counterexamples go by.

Oh dear, I haven't heard about affix hopping since the good olde GB-days. In Minimalist syntax (aka Program), there is Agree. So, in your first example, T has an uninterpretable phi-feature, number (among many others), and it gets its value from (or it is checked by) the DP in the specifier position of (little) v. See Adger's 2003 Core Syntax for a start.

Concerning mininamlism: Also Adger's sophisticated Concept of features does not get rid of the basic problem, that do support is irregular - it only applies to negative affirmatives and interrogatives and positive interrogatives (without having an extra emphatic taste to it). Adger tries to capture this via a last resort do insertion, which in my opinion is a far too powerful concept. Fun fact: diachronically speaking do support used to be regular - it could be used in a non emphatic sense in modern English positive affirmative sentences.

3
Can we parse the hell out of this construction?
0
How is the 什么...都 (shénme ... dou) construction in Standard Chinese usually analyzed?