From my understanding, a tonal language is when a difference intonation of the word changes its meaning. Now: Italian for example (which I was told is not tonal) differentiates questions from affirmations simply on how you say the sentence (while other languages have things like a different word order or words indicating that what you're saying is a question): isn't this tonality, since you're changing what you're saying completely solely based on the pronunciation?

This is not just for questions: pretty much all punctuation represents a way of pronouncing the sentence which usually changes how people interpret it, and there's the fact that putting emphasis_ on a word will also (usually) change how people perceive the sentence, thus changing its meaning.

Don't most spoken languages do something like this? Is this tone, or is it something else?

Most languages called tonal are more precisely described as having lexical tone. This means that tone conveys a meaningful distinction between different lexical items. E.g. in Mandarin, 妈 mā with a high tone means "mum", but 骂 mà with a falling tone means "to chide".

There are some languages with grammatical tone, where a shift in pitch conveys grammatical information. E.g. In the Ngiti language of the Democratic Republic of the Congo, four different tenses of the verb "to whistle" can be distinguished using tone alone: ma màkpěnà "I whistled" (recent past), ma mákpěná "I whistled" (intermediate past), ma makpéna "I will whistle" (near future), ma makpénà "I used to whistle" (past habitual). [source]

This does open up a can of worms around determining what is a word and what is a clause, but in many instances, this is a useful enough distinction to be getting on with.

It has been a long-standing challenge to define the difference between tone and intonation, since both exploit fundamental frequency as a physical exponent. The difference is generally drawn by reference to that which can be contrastive within the word (serves as a factor marking one word vs. another word), versus that which signals functional properties of collections of words in a sentence. However, intonational differences can be found within single words which are complete utterances, for you can utter "John" with various different pitch patterns, thereby signalling impatience with John, asking whether you are referring to John (vs. someone else), or sharply admonishing John. Also, there are languages like Zigua where lexically contrastive properties of one word (perhaps a specific noun, perhaps a particular verb tense) are realized not on the word that underlyingly bears that property, but on some following word (this is known as tone shift).

Attempts to define the difference in terms of physical substance simply don't work. The best characterization of the difference is framed in terms of how each functions, but identifying functions has proven tricky, because inflectional categories can be signaled with segmental affixes but also with tonal modifications: but the typical pragmatic distinctions signaled by intonation can also be signaled with segmental inflections. Indeed, the ambiguity reaches the point that one cannot definitively say, in certain tone languages, whether a certain regularity is the result of a tone rule, versus an intonational pattern. Example: in Shona, yes-no question can be signaled by changing a pre-pausal H tone to L – or by intonationally lowering the pitch of that H.

In other words, it may be impossible to devise a compelling argument that some fact of a language is "tone" versus "intonation". The main argument for treating that Shona phenomenon as a phonological rule of tone change is that is neutralized otherwise distinctive utterances. There is a theory that phonetic implementation does not fully neutralize phonological distinctions, which is IMO the most-viable diagnostic of the tone / intonation distinction.

All languages have intonation (at sentence or phrase level), or the rise and fall in speech over an utterance but not all languages are called tonal.

Let's take Chinese (which I don't know at all). There is, however, a standard explanation of tones in Chinese as follows below.

So what is transcribed as MA in English has four tonal patterns.

Here is a chart of those tons:

The Complete Guide To Chinese Tones by Olly Richards [...]

Below is a graph showing you the pitch level of the four tones. And also the symbols used on top of the letters to represent them. 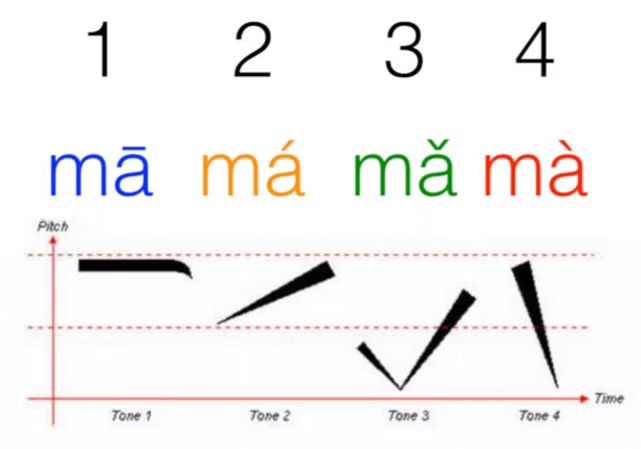 So, in English, the letter a has many sounds and each is different. In Chinese, the pronunciation is the same for the phoneme is the same but it is the pitch ( flat, rising, dip and falling, are the typical descriptions of them in English ) within the phoneme that creates a semantic difference. This does not exist in a non-tonal language like English.

Take the word Ma, for mother in English. It will not be a change in pitch of the letter a that will make it mean something different. It will be the pronunciation of the a. For example, Ma meaning mother could presumably be: æ (as in mat) OR ɔː(as in maw) Those are two different sounds for the a in Ma. A child can shout out: "Ma, stop tickling me!" and draw out the a sound. Or, that same child can shout out: "Ma, I want to go now!" and rise and fall in the a sound, and that would be known as whining in English but does not change the word.

Whereas in Chinese, ma can mean: “mother,” “hemp,” “horse,” or “scold” depending on the pitch used.

It is rather difficult for English speakers to learn these tones after childhood. However, it can be done.

Please note though that this is nothing compared to Vietnamese which has six tones! So good luck with that, English speakers. :) I have tried over the years to hear the difference and cannot. (There are other tonal languages, like Thai, but I can't cover all of them. This is just meant to be a taste not a meal.)

Here's an explanation of them:

And notice how poetic this description of them in English is:

Not the answer you're looking for? Browse other questions tagged terminology tone prosody tonal-languages or ask your own question.