Does linguistics have a concept of "set phrase" with a meaning differing from "idiom"?

I had long believed there was such a thing as a "set phrase". I thought I had learned it in my school days.

Set phrases included but were not restricted to idioms.

Idioms were a special class of set phrases whose overall meaning is not transparently based on the sum of its parts, such as red herring and to kick the bucket.

Other set phrases were transparently based on their parts but still tended to occur as fixed units. Perhaps like at this point in time (but there may be better examples).

However the Wikipedia article on set phrases has always been very poor, which makes me wonder if the concept I learned may not be as widely held as I thought:

Are there some more solid references? Is this a linguistics concept? Do I have the right term but the wrong definition?

No need to say that there is a lot of variation in linguistic terminology. See Table I.I below from Cowie 1998: 5 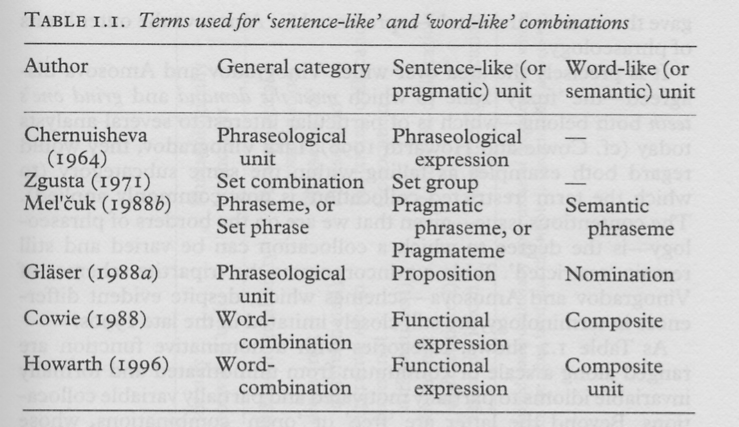 Here are some most common ones - based on Granger and Paquot 2008.

The term "set phrase," when used in the broad sense, will include anything but free combinations (Cowie's classification above); semi-, quasi-, and full phrasemes (Melchuk's classification). For example, Mel'chuk 1998 says the following:

"People speak in set phrases, rather than in separate words, hence the crucial importance of set phrases. At the same time, set phrases, or PHRASEMES, represent one of the major difficulties in theoretical linguistics as well as in dictionary making" (Mel'chuk 1998: 24).

Burger, Dobrovol'skij, Kühn, and Norrick 2007 argue that "set phrase is a widely accepted term in English. [...] It thus includes all fixed expressions of a language, such as collocations, idioms, quasi-idioms, catch phrases, routines, proverbs" - in other words, it is equivalent to German Phraseologismsus in the broad sense (Burger 1998). To make things worse, some Anglo-American linguists use "idiom" or "collocation" in this sense, too. Here's what Burger et al. suggest: 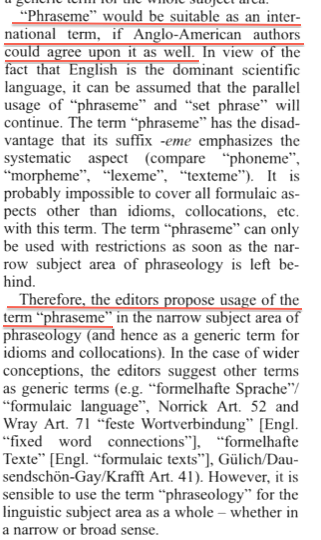 To show how huge this terminological divide between Anglo-American linguists and the rest of the world is, in Granger and Meunier 2008 (23 papers, more than 400 pages), the term "set phrase" is used in two papers only (!), three or four occurrences only, the phraseological unit or phraseme being used much more frequently.

For more details, see Burger, Dobrovol'skij, Kühn, and Norrick 2007 or a collection of papers in Granger and Meunier 2008.

Istvan Kecskes uses the term "situation-bound utterance" (SBU) to identify "highly conventionalized, prefabricated pragmatic units whose occurrences are tied to standardized communicative situations". Kecskes (following a line of thought in linguistic pragmatics led by Coulmas, 1981) notes that "set phrases" (that is, prefabricated pragmatic units) can be classified on a continuum from least obligatory in a given situation to most obligatory, i.e., an SBU. An example of an SBU is the set phrase "all aboard!" that is tied to the situation of boarding a train. SBUs differ from idioms for their situational obligatoriness and also for their semantic transparency. To differentiate between an idiom and an SBU, take "he has kicked the bucket" vs. "he has gone on". The idiom is not semantically transparent (it doesn't mean what its words say).

This is all to say that there are many kinds of "set phrases" in language, and linguists set out to identify them and give them precise terminology.

Not the answer you're looking for? Browse other questions tagged terminology set-phrases or ask your own question.

1
The Correct Research Methodology To Substantiate If an Expression is an Idiom?
1
What part of speech is the French "à la mode"?

7
What does linguistics call sets of words with the same spelling, different (but perhaps related) meaning, and different emphasized syllables?