What's the difference between recursion and embedding?

Recursion in phrase structure grammar is where an expression of some type contains an expression of that same type. Under this definition, chains of relative clauses count as an instance of recursion. We can see this more clearly by drawing a (simplified) Phrase Structure Tree of your example (note i'm abstracting away from irrelevant details, e.g. the syntax of relative clauses. The 't' in the subject position of each relative clause stands in for an empty category - every theory of relativisation has to assume something like this): 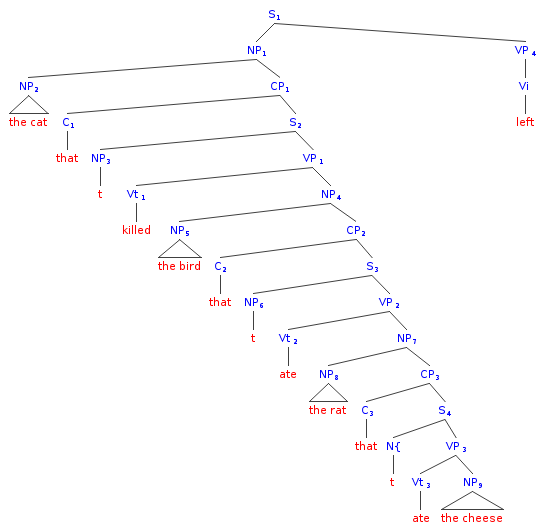 The tree can be characterised by the following set of rewrite rules:

Now let's consider your example involving a string of attributive adjectives. Under standard assumptions, adjectives are adjoined to the Noun Phrase - this captures the fact that an NP modified by any number of adjectives still behaves as an NP externally. Consider the following simple example + PS-tree: 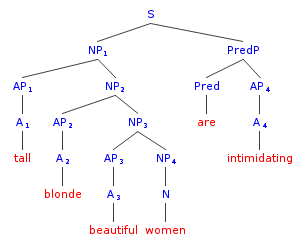 We can characterise the tree via the following set of rewrite rules:

I hope this clarifies the distinction between recursion and embedding. Recursion crucially involves embedding an expression of some type within an expression of the same type. If the types are distinct, we aren't dealing with recursion (in the narrow, linguistic sense).

(my slightly incoherent ramblings on recursion, Merge, and embedding)

Recursion is not Merge

cf. Berwick 1998's observation that recursive generative capacity is an inherent property of Merge (p. 332). They are both concatenative (or combinatorial) operations; however, Merge involves hierarchy.

Nevins et al. argue that Merge is recursive because it can combine “lexical items and phrases” of any type (p. 367, n.11), cf. Zwart 2011 “[t]he operation Merge is standardly taken to be recursive in that the output of Merge may be subject to further operations Merge” (p. 116).

When alpha and beta are Merged, either alpha or beta projects its property (N, D, V, v, T, C etc.) onto this whole new phrase. This is what Horsntein 2010 calls Label (and Chomskyan Merge is Concatenate under his proposal; also notice that some generativists don’t do labels, like Chris Collins). However, this information about the head isn’t necessarily preserved through several instances of Merge, e.g. V selects a DP and we end up with a VP. What makes Merge truly recursive is that “the output of one derivation functions as a single item in the next derivation” (Zwart 2011, p. 116). I think this is very important, otherwise Merging gamma with [alpha+beta] will lead to simple iteration. [alpha+beta] must be treated as a single unit when it is Merged with gamma.

Things are rendered a bit murky by the fact that the notion of 'category' began to get a bit fuzzy with the introduction of features into trees with Aspects of the Theory of Syntax (1965) and especially Remarks on Nominalization (1971), where NP, VP etc were treated as [+N, +'double bar'], [+V, +'double bar'], etc, and people were also treating case, etc as features on NPs. So how many features do we pay attention to? The minimalist doctrine says 'ignore all of them', but there could also be a 'maximalist doctrine' that says 'pay attention to all of them', in which case many instances of recursion would go away due to feature differences between the levels of the embedding. So for example 'John's picture of Mary' would not be recursive if you supposed that 'of' assigned a kind of abstract genitive case to Mary that was not present on John.

In practice, most linguists (eg Carnie in his textbook) seem to have assumed that standard PS category features count for recursion and others don't, but there is no satisfactory delineation of what the category features are, so the Minimalist view is probably the most coherent one out there.

12
What is recursion?
4
What are the structural similarities that exist common to all languages?
1
Does the recursive capability of Merge demonstrate the productivity of human language?
0
Is there any rule in recursion?