Etymology is the study of the origins and history or development of words and phrases.

What exactly is the relationship between etymology and linguistics?

When etymology as such is covered in a linguistics curriculum, it is usually in a historical linguistics class, and I think what current research there is (not so much as there used to be, for sure) is often done by people who would consider themselves doing historical linguistics of some kind. Much of this kind of research is now under the heading of "semantic change", and is more theoretically motivated than traditional "etymology". I.e. the interesting questions aren't what are the histories of particular words, but rather, what explains the attested/possible patterns of semantic change. I think there is also a certain amount of less historically oriented work on semantic change in pidgins/creoles and that kind of thing. In general you may get the impression that it isn't part of linguistics because though it is a part of linguistics, that part is more or less outside the mainstream as represented in the USA.

(Contra Alenanno's answer, I'm not really aware of any researchers, courses, or conferences that cover "lexicology" as any kind of coherent subfield in the way that the other things in that chart are.)

Technically it belongs to Lexicology, but since this last one in turn belongs to Linguistics, you could say that Etymology is part of it as well.

Plus, Lexicography is actually under Lexicology. See the following scheme: 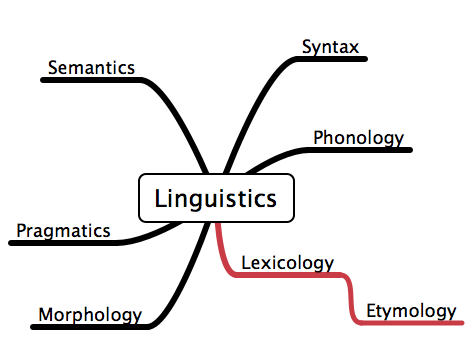 As a first approximation, one could probably claim that etymology is the diachronic dimension of lexicology but that would probably be too reductive. This is because to fulfil its role, etymology draws on many other disciplines of linguistics.

For instance, etymology relies heavily on phonology to justify successive forms of words because it needs laws to justify how phonemes morph into one another or even disappear altogether. This in turn even allows the reconstruction of bygone pronunciations and unattested word roots.

It also builds on morphology to explain how people evolve the words they need from the ones they have and semantics because meanings shift no less than phonemes.

It is thus both a fundamental component of and an indispensable contributor to historical linguistics and works in this respect hand in hand with hydronymy and toponymy.

Because historical linguistics adds the time dimension to synchronic linguistics it is one of the litmus tests allowing us to prove or disprove theories aiming at explaining how things are the way they are today as much as at predicting how they might turn out tomorrow.

As such I shall venture that etymology is not only a part of linguistics but even a central one.

A linguist who devotes their time to studying the phonetics (i.e. a phonetician) of an under-documented language, is still a linguist, despite their narrow focus.

Likewise, a linguist who devotes their time to documenting the lexical environment of a language (i.e. a lexicographer) is still a linguist.

If a question were posed to a phonetician about the occurrence of an alternation between two phonemes in language X, the question would be legitimate and relevant to linguists, even if the audience is small. So I am inclined to say that questions about specific word etymologies in a language X, would be well within the realm of linguistics to provide an educated answer, and hopefully expound on the example with interesting/relevant information.

The word 'etymology' is about individual word histories, which is definitely a part of linguistics.

But that doesn't mean there is a sub-section of academic linguistics departments with faculty members who primarily call themselves 'etymologists'. Dictionary makers might have specialists in etymology (which would require all sorts of linguistics and particular language training).

The people who 'do' etymologies might have more training in multiple specific languages. It doesn't seem likely that they would be a member of a Linguistics department's faculty (at least not in the US). Philology might be a label for a faculty that culturally etymology falls under elsewhere.

Not the answer you're looking for? Browse other questions tagged etymology terminology or ask your own question.

5
Does linguistics have a concept of “set phrase” with a meaning differing from “idiom”?
5
Can words have multiple, different origins
3
How do 'semantics' and 'meaning' differ?
9
Are non-spoken elements, such as capitalization and punctuation mark usage, part of the English language?
5
What is 'OE Gloss.'?
4
Is there a specific linguistic term for the following practice of constructing new words/characters?
2
Similar term as phonetics, but for written text
0
Isn't the supposed development in German “schön” > “schon” typologically unlikely