This is something that bugged me before I studied linguists, and it still does - why is the word "orange" so often used for both the colour and the fruit cross-linguistically? Every language I've learned has these items as the same word, or at least very similar origins. English (orange), Polish (pomarańczowy), Italian (arancione/arancia) and Nepali (suntala). Granted, these are all Indo-European languages but they do cover quite a spread, and my sister tells me that Mandarin has the same feature with chéng referring to both the fruit and the colour. I'm assuming that languages have borrowed the work for the colour on the basis of the fruit, and not the other way around but I may be wrong.

I know that oranges are a relatively recently introduced fruit to many places, but is this phenomenon as cross-linguistically common as it appears from my limited experience. And if so, why?

In a situation where you want to refer to a colour and either you don't know of any name for that colour or you know the name but you also believe your interlocutor doesn't know it - you'll instinctively resort to the evocation of an object characterised by that colour.

So, unless one wants to tell the policeman "I think the light was still in the 580-620 nm range when I crossed!", we need aliases for colours.

As for the orange colour, interestingly enough, the Old English word was "geoluread" (PDE yellow-red, G. gelb-rot). One has to say that in those times, very few people in England had had a chance of seeing real oranges.

The fact that oranges are quite alone in their category of orange-coloured objects added to their simple shape and the consistency of their shade probably explains why people commonly used it as a reference for the colour and that the name of the fruit became the name of the colour.

One can only notice that the phenomenon is a widespread one, observed in many languages and suffering only a few notable albeit easily understandable exceptions.

Here is a whirlwind tour of the various family of names for the fruit and its distinctive colour.

Note 3
appelsien = Chinese Apple. There is no relation with the original sin although many German contemporary oil paintings depict Adam and Eve together with the snake coiled inside an orange tree.

I think hippietrail is on the right track. Two things are worth mentioning:

This relationship is called polysemy: when one meaning tends to be so close to another meaning that the word for one is generally co-opted as the word for another.

One of the most reliable examples of polysemy is container polysemy. The idea is that a container is so closely associated with its contents that we can use the term for the container to refer to its contents. Here's a minimal pair:

Alain Pannetier answers this pretty comprehensively, but there are some other notable exceptions where the word for the colour "orange" is cognate to neither orange, Portugal, nor appelsien:

The word for the fruit "orange" in the languages of Europe: 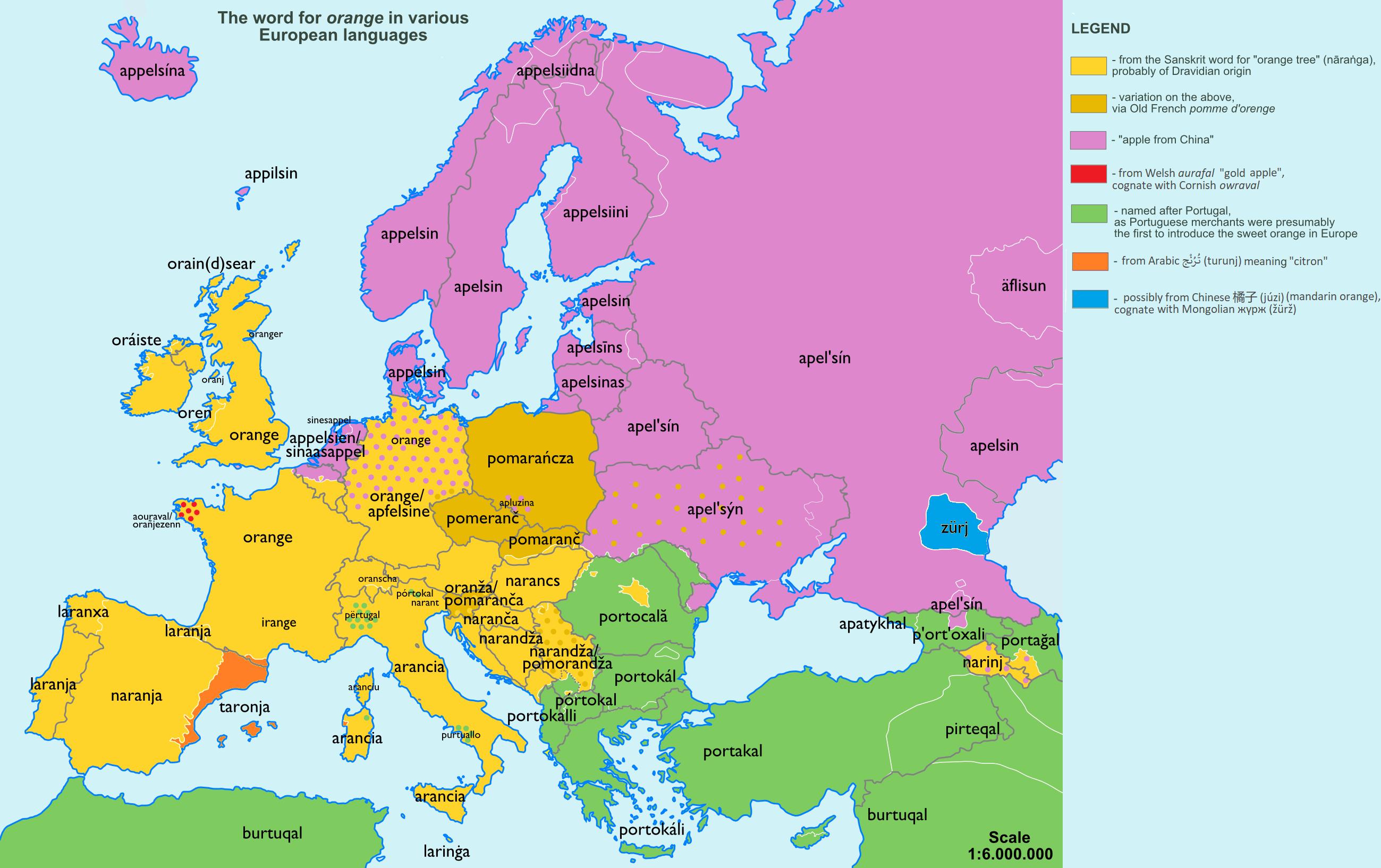 The spread of the word for the fruit "orange": 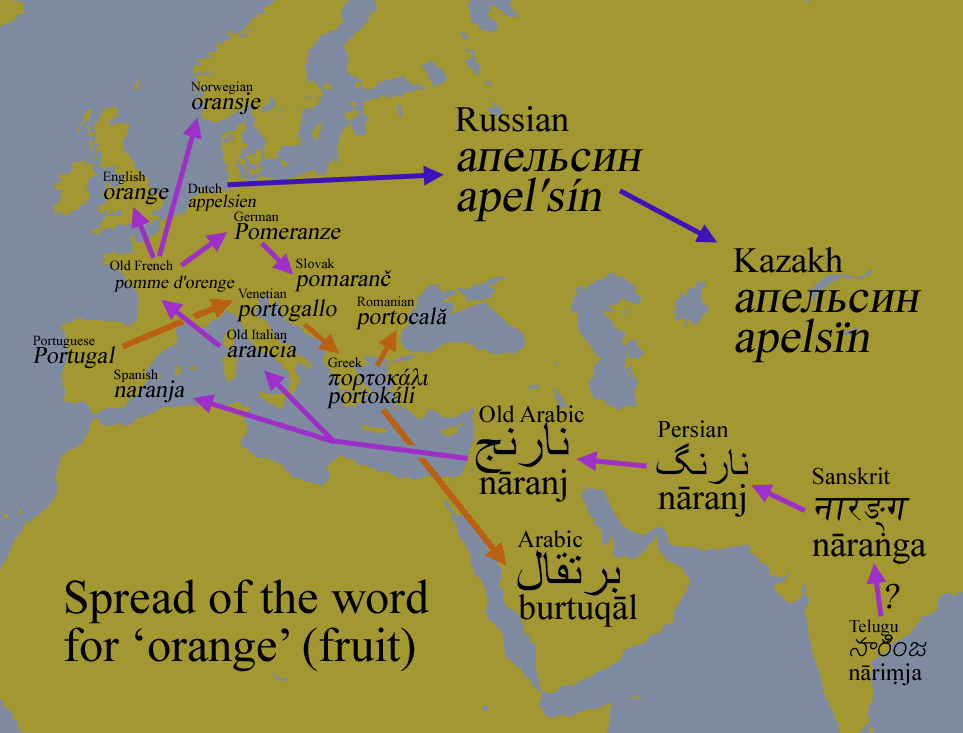 I believe that orange is not just a recently introduced fruit in many parts but that the concept of a colour word for this shade is also recent.

Recall that many languages do just fine with much fewer colour words than English has.

In some languages "orange" doesn't always have full status as a normal adjective but may sometimes be a circumlocution like "orange colour" or "colour of orange".

I don't have enough rep to add a comment to the OP, so I will give you this information in an "answer". In Hebrew the fruit "orange" is a new idea, and thus has a new word. However, instead of calling it by the colour orange (which would be כתום "Katom" in Hebrew) we call it a תפוז "tapuz" which is a portmanteau of "golden apple". So the fruit is in fact named after a colour, but not the colour of it's peel.

In Malayalam, the color is now said orange (loan from English):

:( The fruit is said orange too: ഓറഞ്ച്

As for pink, there's a choice between

Unfortunately, most of these ''new'' colors and shades in Indian languages are just borrowed directly from English, even in mainstream Tamil (which is known for its purism).

I agree with Tom Sugnetic. Even though the color names in Tamil are borrowed from English, there was/still is an attempt to create new words by using Tamil roots. Name for each new color is formed by combining the names of the basic colors which form it. Generally, (veLLai) white and (kaRuppu) black are used to show the intensity/brightness of the new color.

For example, orange is called as "whitish red". (வெண்சிவப்பு in Tamil).

Around 100 new names have been invented for colors in Tamil.

Just adding another language that I don't think has been mentioned yet. The Bengali (or Bangla) word for both the fruit and the color is কমলা (transliteration: komola).

Not the answer you're looking for? Browse other questions tagged etymology semantics cross-linguistic colour-terms or ask your own question.