I am reading a book on Government and Binding theory [1] and just finished a chapter on big pro (PRO). At the end of the chapter there is an exercise. Different sentences are written with faulty representations and the reader is asked to dispute them. One of them is this:

Unfortunately I was absent when the instructor covered the exercise in class. It's obvious that there couldn't be a PRO within the brackets, because the I (head of the IP) would govern it and that would violate the general rule that PROs should be ungoverned. I also understand that there couldn't be any small pros there either, because the English language is not a pro-drop language and subject pronouns can not be omitted (unless in imperative sentences)

I get it up to here. But then the instructor has analyzed this sentence further. He has said that the sentence is an instance of across-the-board extraction and here two VPs (rather than two IPs) have been linked by coordination. He bases his syntactic representation on the VP-internal hypothesis (= The subject originates in SpecVP and usually then moves to SpecIP), saying that the Specs in the VPs are simultaneously moved.

He goes on to say that the phenomenon is also seen in the objects. For example in the sentence

What does John buy and sell?

What is the object of both buy and sell. Generally speaking, he says, whenever we have two coordinated structures, if we extract something from one of them we have to do the same with the other.

He has also drawn the tree diagram of the original sentence in question, based on X-bar theory, but unfortunately I only have access to the audio file of that session. That's why I don't think that I fully get what he is talking about, and I don't know how to draw the diagram and explain the process.

Can anyone please, using the original sentence as the example, explain the process in terms of government and binding theory, saying exactly and step-by-step what constituents are moved and how I should represent the sentence syntactically?

I'll attempt to go through the various analytical possibilities for your example sentence within the GB framework:

(i) John opened the door and left

This hypothesis entails that (i) involves co-ordination at the IP-level. This leaves open a couple of different possibilities for analysing the subject gap in the second conjunct:

If (i) involves control, we know that it must be obligatory control, since the subject of the second conjunct has to refer to John. There are two separate arguments against this. The first, as you make clear in your question, is that PRO must be in an ungoverned position, but a finite subject is governed by I. The second is that obligatorily controlled PRO must be c-commanded by its controller, which isn't the case here. Here's the tree:

Hypothesis 1.2 (i) involves movement of the subject

We can represent this possibility by replacing PRO in the above tree with a trace co-indexed with the subject of the first conjunct. We can straightforwardly rule this out due to the fact that movement must be to a c-commanding position.

As you state in your question, we can rule this out straightforwardly since English isn't a pro-drop language.

Now that we've exhausted the possibilities for analysing (i) as involving sentential co-ordination, we can consider an alternative hypothesis: Namely, the one your instructor laid out. 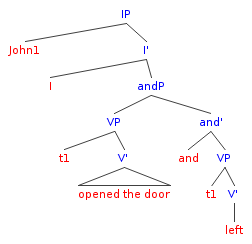 Ross (1967) identifies conjuncts as syntactic islands, in order to rule out extraction of, e.g., a wh-word from a single conjunct, as in the following example:

(ii) What did John buy t and Mary sold a car?

Constituents can exceptionally be extracted from conjuncts just so long as parallel extraction takes place from out of all of the conjuncts. 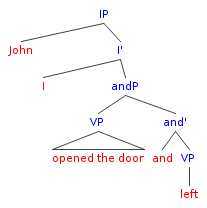 Ultimately, 2.1 and 2.2 can only be distinguished on the basis of independent evidence for the VP-internal subject hypothesis, such as the distribution of floating quantifiers. Since this is covered in the Haegeman textbook, and it isn't immediately relevant to your question, i won't go into it here.

My assessment is that your description of the problem mostly answers your question. The subject John is simultaneously ATB-moved out of both VPs into the SpecIP. There is no PRO present because the coordinate structure does not contain a control structure - PRO is associated with control.

The particular tree diagram for your sentences relies crucially on the analysis of coordination, since you are dealing with coordinated VPs. I think you want a tree that positions the VPs equi-level. In each of the VPs, a trace t coindexed with the subject in SpecIP should appear in each of the two SpecVP positions.

Finally, I can comment that the GB analysis your instructor is looking for would be rejected by many working in syntax today. Your textbook is almost two decades old. In particular, many might prefer an analysis that does not assume ATB-extraction in your first example (but ATB-extraction is plausible for your second example). Instead, one might assume straightforward coordinated VPs that contain no traces. Such an analysis is preferred by non-derivational (i.e. non-transformational) theories.

Not the answer you're looking for? Browse other questions tagged syntax syntax-trees chomsky coordination or ask your own question.

9
Are there any recent articles on the current state of Case theory?
7
Syntactic status of 'than'
4
if vs. whether (complementizer)
3
Unaccusative verbs, EPP and Case Filter
1
Does this sentence violate Principle A of Binding Theory?