Does the initial part of voiced consonants always have a low pitch?

The spectral graphs in the accepted answer of "What is the difference between voiced and voiceless stop consonants?" shows that in English, the initial part (before the stop release) of voiced stop consonants has a lower pitch compared to the vowel that follows. Is it true for all voiced consonants in English? Does the same apply to other languages as well?

In general, yes--the F0 (fundamental frequency) of the voicing during a stop closure is going to be lower than that of the following vowel. The fact that there is a full closure in the oral tract (for non-nasal stops) means that there is nowhere for the air coming out of the lungs to escape, making it difficult to maintain a high velocity of air through the glottis and thus slowing down vocal fold vibration. When the oral cavity is opened for the release of the stop, the built-up pressure causes the air to rush out initially, making for a higher rate of vocal fold vibration.

I tried recording myself producing some voiced stops in various contexts, and the only time I observed a partial exception to the above generalization was when the voiced stop was between two vowels and the first vowel had a much higher F0 than the second vowel. In that case, the incoming F0 had enough "momentum" to give at least the earlier part of the stop voicing a higher F0 than the following vowel: 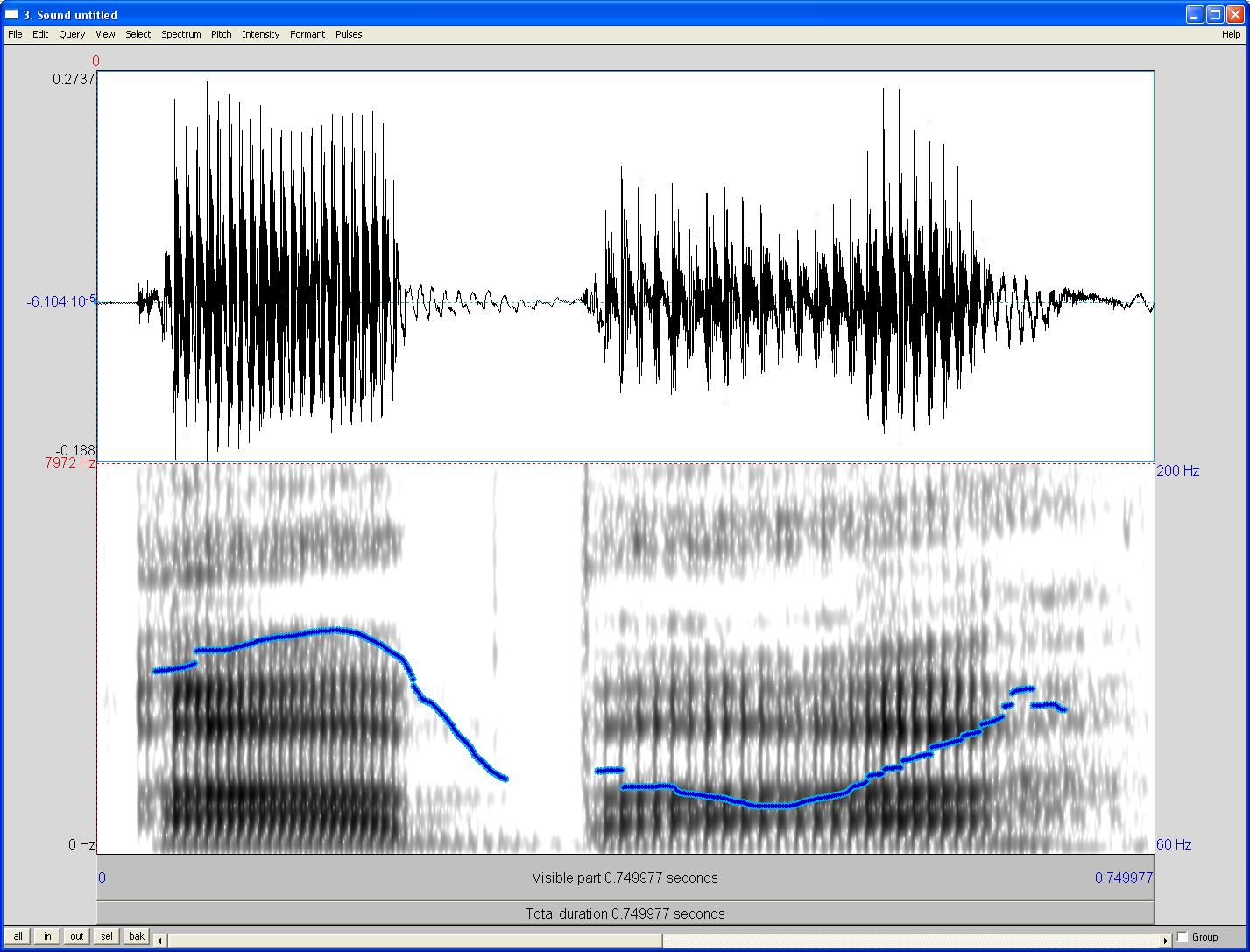 However, even in that case, the vocal fold vibration toward the end of the stop appears to slow down to a rate that is slightly lower than the initial F0 of the following vowel.

I would expect this effect to be a language-general one, since it has to do with the mechanics of airflow through the vocal tract.

13
What is the difference between voiced and voiceless stop consonants?

9
How can I differentiate between syllable-initial [ɣ] and [ə] using Praat or other software?
7
The "writer / rider" distinction
5
What are Georgian harmonic clusters phonetically?
2
Are voiced stops in English articulated in the same manner as their nasal counterparts before the stop release?
1
Voiced aspirated sonorants? (Not breathy voiced)
4
How many vowels and how many consonants did the Proto-Indo-European Language have?
1
Looking for minimal pairs showing lenis/fortis distinction (preferably for German pronunciation)
0
/l/ environments in English and Introductory Phonology by Bruce Hayes
1
Why does /zd-/ require more effort even though both the consonants have the same voicing?
2
What does "fine-grained voicing distinctions" for consonants mean according to IPA?