This is part of a set of three related questions but note they are each specific and distinct, they are not duplicates.

In all the languages I'm familiar with that have an indefinite article, the word is related to the word for "one". In fact in English it's more opaque than for most languages I know: "a" / "an" vs "one".

But are there languages which have the indefinite article but in which it is not related to the word for "one"? Perhaps one word or the other has been borrowed from another language, or perhaps the two words evolved from separate roots? Is this known to be possible?

N.B. Louis Rhys has pointed out that some languages have various kinds of indefinite articles but this question is only concerned with the "main" indefinite article despite my inability to express that succinctly is a single sentence. For instance if French or one of its dialects or creoles were to lose the words "un" and "une", and "des" assumed their role it would be an example of the affirmative.

*Arabic sample taken from "Definiteness" by Christopher Lyons page 91-92 (you can find the pages in Google Books). The book lists the tanween under "indefinite articles" out of the other indefiniteness marker types, also says that this "putative article" .. "cannot plausibly be argued to be a cardinality expression"

As you can see from this map on the Wals.info site, there are many. More explanations on the main page.

After a quick search I did, it surprised me to see some languages on this list that seemed to use the same word for one and the indefinite article, such as Dutch. I might be wrong, it seems, so you might want to look more in depth for the ones you want to study more.

Anyway, there seem to be around 100. I'll list them below for ease of reference alphabetically and ordered according to the continent.

Note: I removed some obvious false positives that arose as not fitting but some may remain. 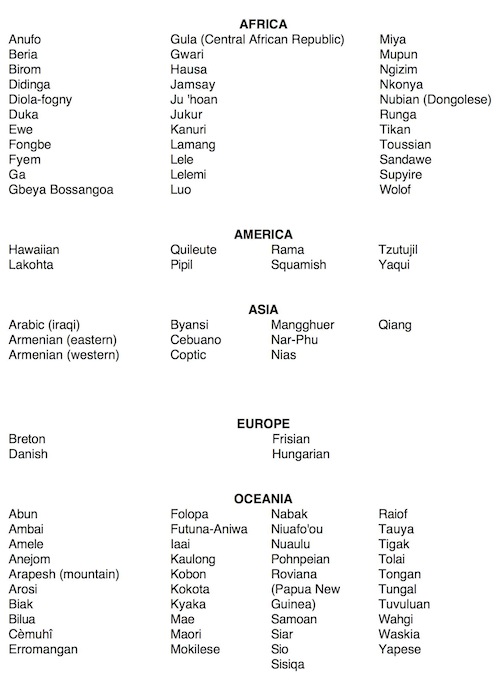 Czech seems to be developing some sort of definite/indefinite articles with definite ones being evolved from demonstrative pronoun "ten" (this), while indefinite ones from the undetermined pronominal adjective "nějaký" (some), which has no connection to the numeral "one".

Mind you this is far from fully grammaticalised form but even now the uses are very close to the typical one for artcicles (particularly the definite one seems to be on its path to becoming fairly obligatory).

For the first example, the emerging article can be easily omitted, in the second one, it would sound fairly strange.

Not the answer you're looking for? Browse other questions tagged linguistic-universals etymology numbers numerals indefinite-article or ask your own question.

14
How do linguists determine whether a language has an indefinite article?

14
How do linguists determine whether a language has an indefinite article?
5
Are there languages which lack a full number system but which have an indefinite article?
15
Which modern, spoken languages do not use the decimal number system?
9
Etymology of basic numerals (number words)
3
Is there a term for words which falsely appear to be related etymologically?
6
Understanding the purpose of determiners/articles/demonstratives in language
2
Are the English word "charm" and Russian word "чары" etymologically related?
7
Is there a language with dual indefinite articles?