What morphosyntactic features are associated with VSO?

In an answer to another question, librik cited Orin Gensler's observation that Insular Celtic and Semitic share a surprisingly large feature complex. This makes it hard for a layman with ready access to only the "Berlitz" languages (as John McWhorter calls them in ''The Power of Babel'') to become familiar with how a language using verb-subject-object word order behaves without conflating VSO in general with this sort of Celto-Semitic Sprachbund in particular.

I've looked through the University of Konstanz universals archive, and I'm aware of a few features predicted by universals to come along with VO (placing the verb before the object) for branching consistency reasons: noun before adjective or genitive, preposition before noun. But I'm interested in what other features VSO statistically pulls in compared to SVO. For example, VSO makes verb and object no longer form a surface VP constituent, and the need to cope with this in some way might bring in x, y, and z features.

So what other features are associated with VSO across languages?

There's good discussion of this question in Borsley et al., The Syntax of Welsh. Their discussion is focused on Welsh, but they cite typological work such as that of Dryer. That's important because some of the early and very influential correlations proposed by Greenberg, such as the correlation between VSO and noun-adjective order, have since been shown not to hold, and Dryer's sample is much bigger and better balanced. Some that Borsley et al. report as robust, though:

With VP shells, one way to analyze VSO languages is to say the tense features on the light verb v are strong, while the EPP (Extended Projection Principle) feature is weak (i.e. the subject stays in situ). Take a VSO language like Scottish-Gaelic 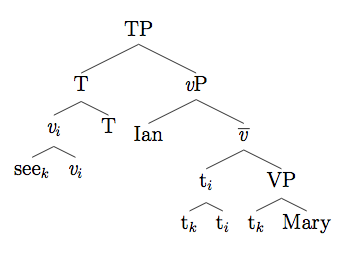 If the vP is elided from this structure, we delete both the subject and object and that's what VP ellipsis does in Scottish-Gaelic. The question

can be answered by 'Chunnaic' (Yes) or 'Chan fhaca' (No). Both have their vPs elided. Perhaps this is true for most VSO languages.

Not the answer you're looking for? Browse other questions tagged syntax morphology cross-linguistic word-order vso or ask your own question.

16
Are there other pairs of languages that are as close grammatically despite not being in the same language family as Korean and Japanese?

8
Are there languages with more than three degrees of comparison?
2
What is the web-searchable database of linguistic features?
4
What grammatical features do SOV languages often share?
1
What is the position of the subject in a Greek sentence, whose word order is VSO?
3
Origin of describing emotions with adjectives associated with taste