Can adjuncts be arguments?

I hear that only complements and specifiers can contain the argument for a verb. But there are certain structures with ditransitive verbs I believe you can represent as an adjunct. Here's an example:

I can represent this a number of ways: 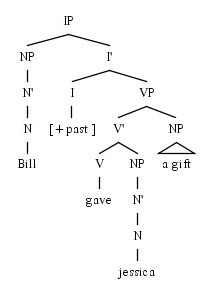 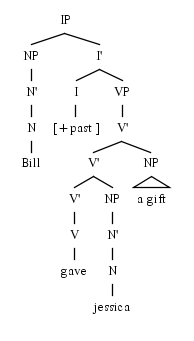 No, the argument vs. adjunct distinction is essential for most theories of syntax, and there is no theory I am aware of that would view any part of the sentence Bill gave Jessica a gift as an adjunct.

Many adjuncts can be identified using certain diagnostics. Take the adverb yesterday as an example: Bill did it yesterday. It can be separated off and put in a conjoined clause: Bill did it, and that happened yesterday. This is not possible with arguments: *Bill gave a gift, and that that happened Jessica, *Bill gave Jessica, and that happened a gift. Arguments are typically nouns (or noun phrases) as with Jessica and a gift, whereas adjuncts are typically adverbs or PPs. It is therefore quite certain that neither Jessica nor a gift in the original example can be viewed as an adjunct.

In my view, the reason for confusion stems from the X-bar theoretic approach to sentence structure. If one is striving to be true to the X-bar theoretic approach, then one of the two structures shown in the question might indeed be the preferred analysis. The problem with both of those trees, however, is that they are not confirmed by diagnostics for constituent structure. Most tests for constituent structure (topicalization, clefting, pseudoclefting, proform substitution, and answer fragments) identify Jessica and a gift as constituents, but they fail to identify gave Jessica as a constituent. According to the two trees, gave Jessica should be identifiable as a constituent.

Again in my view, a much more plausible account of the sentence ejects the X-bar analysis and allows n-ary branching, i.e. it allows relatively flat structures. On such an analysis, the VP is flat; it views Jessica and a gift as sister constituents. Such an analysis is consistent with the results of the named tests for constituent structure.

If you "hear that only complements and specifiers can contain the argument for a verb" ... well, that's really a matter between you and your syntax confessor. Not everybody believes that this is true, however, or even useful.

One really can't expect to read this all off one PS marker, however cheerfully decorated.

Not the answer you're looking for? Browse other questions tagged syntax theta-role or ask your own question.

10
Can prepositional phrases with "of" ever be adjuncts to nouns, or only complements in English? If they can't be adjuncts, why?
2
Are Spanish "que" clauses following "parece" complements or postponed subjects?
1
Syntax trees and comparatives? Maybe adjuncts?
4
Understanding implicit arguments
4
Why is the need+concealed passive gerund construction unavailable with polyadic gerunds?
5
Why can I coordinate direct object + verbal adjuncts?
0
Can adjuncts modify nouns?