Was there an evolution of the Greek alphabet in the Middle East?

I recently visited Jordan and noticed that many mosaic are commented with included text. The text seems mostly ancient Greek alphabet, but it also contains non Greek characters such as C, obviously standing for Σ, at least for some words. Given I forgot most I ever knew of Greek, I mostly looked at city names.

For example yous have the cities NϵAΠOΛIC and ΔIOCΠωΛIC on two mosaics from the 8th century in the Church of St. Stephen at Umm al Rasas. Note also the different spellings for city (POLIS).

Similarly. on the 6th century mosaic map of the Holy Land in the Church of St George at Madaba, there is the city NIKOΠOΛIC. Look below Bethleem (number 2) on the large this map: 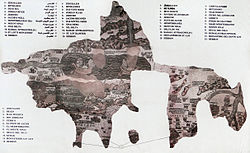 This cannot be the cyrillic alphabet, which does not contain ω and was created in the ninth century anyway, its authors (saint Cyril and Methodius being born between 815 and 827).

This seems to indicate and evolution in the use of Greek characters in that part of the world. Unless the use of C was justified because the ending sigma ς is not easily rendered in mosaic. This does not seem too likely as mosaics are pretty good at that level of details (look at the λ for Bethleem).

Can someone give some light on this. Was there an evolution in writing. How much of it was already done when the two brothers created the Cyrillic alphabet, and would it explain some of the new characters in it?

Also worth noting on the third mosaic (map of the Holy Land) is the Greek spelling of Bethleem, with two different epsilons: BHϑλϵEM. And there is also the frequent mixing of lower and upper case (if I may called them that way, given the time). Was that common?

These are all normal Greek characters. C is a form of sigma: it's called lunate sigma, and is a variant that's sometimes used in printed texts these days too. Lunate sigma is a Hellenistic development which occurred in handwritten Greek (not specific to mosaics) for speed of writing. (It's also the origin of the Cyrillic C for [s].)

In ΔIOCΠωΛIC the omega must be a spelling mistake: at this period Greek no longer distinguished the sound of omega (originally [ɔː]) from that of omicron ([o]), and such confusions are common. The two epsilons in "Bethlehem" look almost the same to me; one's a bit more rounded, but that's well within the usual range of shape variation in pre-print era texts. The lowercase-uppercase distinction would not arise for another several centuries.

Not the answer you're looking for? Browse other questions tagged greek writing-systems evolution alphabets or ask your own question.

8
Are there writing systems with more than upper case and lower case?

10
How does the initial consonant in “Jupiter” and “Zeus” come from the “d” in PIE “*dyew-”?
6
Was there a Greek or Latin name spelled “Jesus” or similarly before the advent of Christianity?
4
Calculating writing system efficiency with respect to reading ambiguity?
9
Why is Greek alphabet left-to-right?