How do I break down the Complement further in accordance with X bar theory. 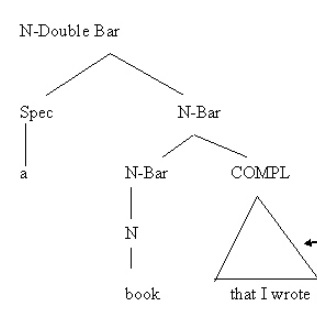 I've given what i deem to be a reasonably standard phrase-structure tree for a that-relative clause, consistent with the principles of X-bar theory below (taking Jackendoff, 1977 as a concrete reference). I'm assuming the DP hypothesis here (i.e. that 'a book...' is headed by a determiner rather than by the noun), but it's easy to re-cast this in terms on an NP if that displeases you. 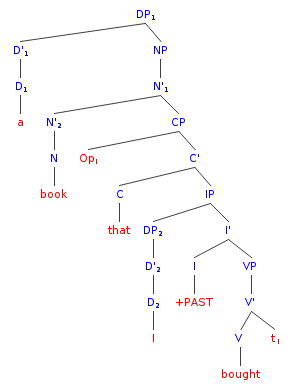 (ii) Relativisation seems to obey the same constraints as wh-movement, e.g. It can cross a finite clause boundary, as indicated by (2):

(iii) Relativisation is blocked by the presence of a syntactic island. Sensitivity to islandhood is generally taken as being diagnostic of, or even definitional of wh-movement. This can be illustrated by the fact that (2) is ungrammatical, where movement out of a syntactic island - Specifically, a complex subject:

Example (4) Shows that wh-movement out of a complex subject leads to ungrammaticality:

(iv) There are languages in which an overt realisation of a wh-word alongside that in a relative clause is grammatical, e.g. in Middle English:

(5) thy freend which that thou has lorn (cmctmeli.m3, 218.C1.31) 'your friend that you have lost' (Retrieved from: http://www.ling.upenn.edu/~beatrice/syntax-textbook/ch11.html)

Not the answer you're looking for? Browse other questions tagged parsing x-bar-theory relative-clauses or ask your own question.

4
Sentential Relative Clauses versus Non-restrictive Relative Clauses
4
Is the X bar theory applicable to any natural language other than English?
1
In X bar theory, is the first auxiliary the head of an interrogative clause and the remainder the complement?
0
Is Generative / X-bar Theory prescriptivist? (can the descriptivist linguist create X-bar syntax trees?)