Are linking/copula verbs only followed by Adjectives and Nouns?

The diagram is from a lesson given by someone on YT. My question is with regard to the Adv phrases that follow the linking/copula verb. My understanding is that only predicate adjectives or predicate nominatives can follow a linking verb - not adverbial phrases. Am I misunderstanding something? Is this tree incorrect ? or what have I misunderstood?

Also - is "under water" is a prepositional phrase - so does it fall under a predicate nominative or predicate adjective? 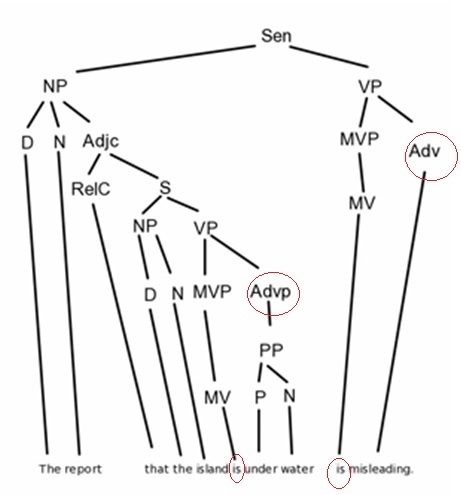 The following article provides a good overview of what predicates and predicative expressions can be interpreted as being: https://en.wikipedia.org/wiki/Predicate_%28grammar%29. I think real insight about the nature of predicates comes with knowledge of predicate-argument structures. Modern theories of syntax and grammar draw a three-way distinction; they acknowledge predicates, the arguments of predicates, and the adjuncts on predicates. Consider the following example in this regard:

If one views the two-word combination is on as the predicate, then this predicate takes the two arguments the book and the table. This approach to predicates requires, however, that one jettison the (in my view erroneous) stance that the predicate in such a sentence is the entire string is on the table. The traditional binary division of the clause into a subject NP and a predicate VP is not supported by emperical considerations.

Why adverbs ending in -ly cannot function as predicative expressions, but most all other word categories can, is mysterious to me.

Sorry for a too short answer, but I guess the entire question can be answered in this way:

the island is [located] under water

Which forms a pretty nice predicate adjective, as you suggested.

Not the answer you're looking for? Browse other questions tagged syntax-trees copula or ask your own question.

9
What is the difference between a copula and a transitive verb?
5
Syntax trees for unaccusatives, unergatives and ergatives verbs (MP) within the split VP framework
3
Are all copulas lexical verbs?
3
Could certain adjectives or adverbs be analysed to function as a type of copula in Mandarin Chinese?
2
Please help me parse the subject complement of
1
Are imperative verbs starting a command subordinating conjunctions?