Please help me parse the subject complement of

The 2 questions are on the diagram. In question 1 - I emphasize "function as" because my understanding is that (in English) a predicate nominative - even though it can take the form of a preposition or even a adverb - must ultimately function either as an adjective or a noun.

In addition - a question 3) Does the verb "BE" always act as a linking/copula (i.e. does it always introduce a subject complement? 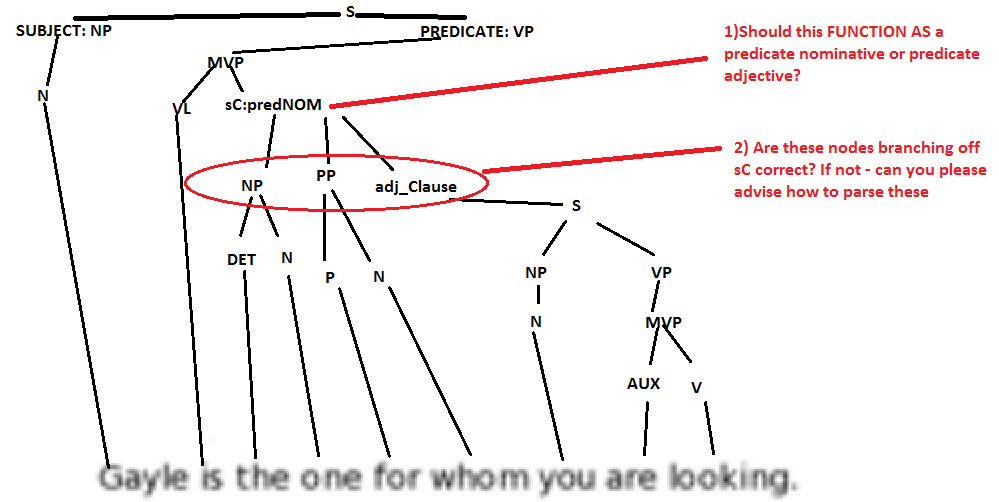 Since the one has an article, it seems fair to treat it like a (pro)noun, so it functions as a noun subject complement.

Then I would probably branch off whom (the relative pronoun) on the one hand and you are looking for [zero] on the other; but there is something to be said for doing for whom v. you are looking. The problem is that whom is both the object of the preposition for and the node that introduces the relative clause.

This below website uses a "silent complementiser that" for my [zero], which seems contrived (the word that is not possible in that sentence), but do with it what you will. It seems clear that you need to add a node for this [zero], whatever you call it. Perhaps look into wh-movement for English. An example of how they parse relative clauses: